Grace and Scott’s wedding day was held at The Club, a venue known for it’s iconic views of downtown Birmingham, Alabama. The couple, who met on a local kickball team, recited their vows in front of a stunning floral arch by Edna K Design on a terrace that overlooked the exact location of Scott’s proposal to Grace. Invision Events planned the day filled with classic details like letterpress by Empress Stationery, calligraphy by The Refined Pen and romantic florals in blush, peach and deep pinks. We especially love the very southern monogrammed linens from Sassy Biscuit—adorable! No details was left un-personalized and lucky for us Kelli + Daniel Taylor Photography was on hand to capture it all. 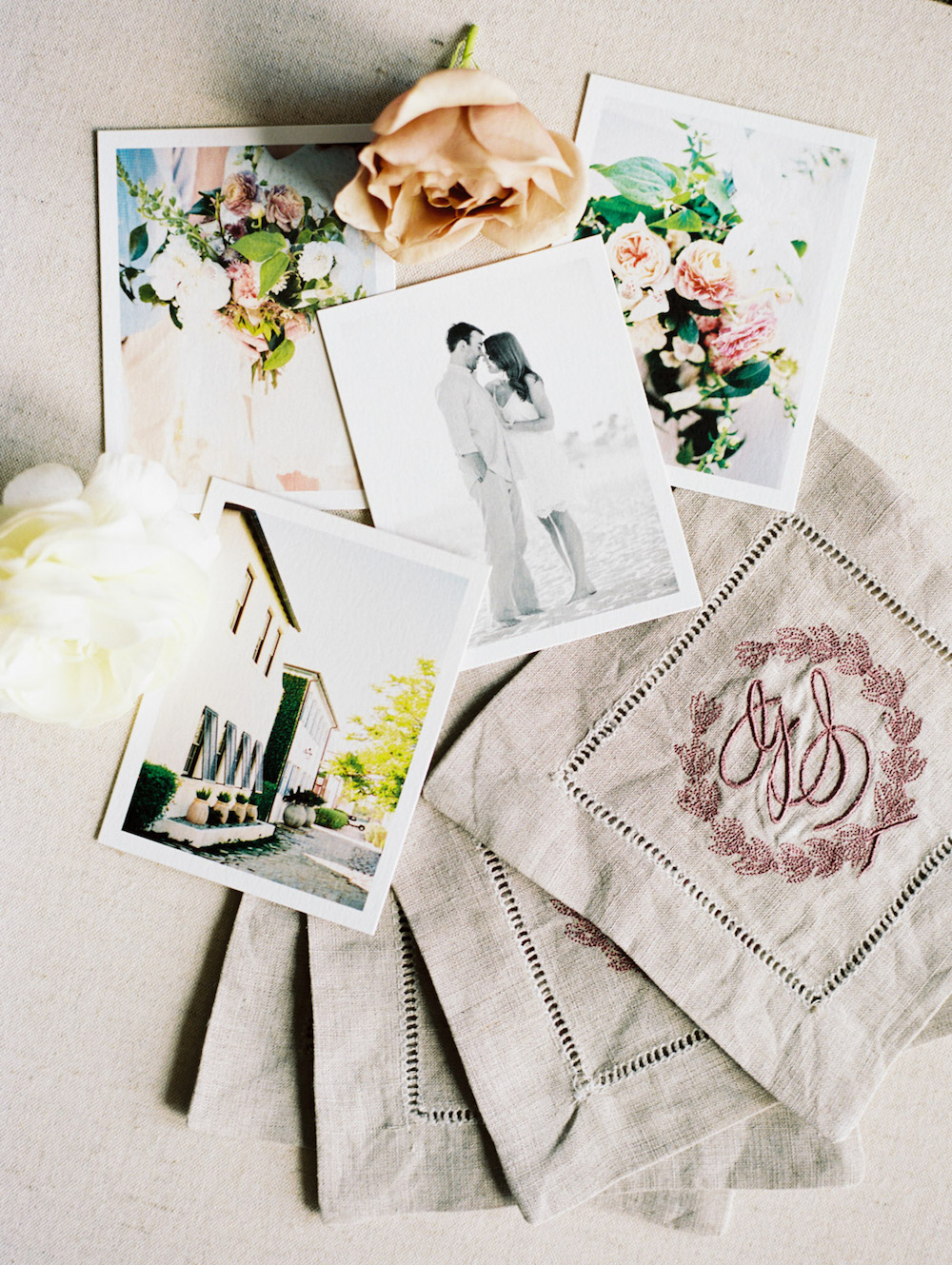 What made the wedding special or unique?

Scott and I chose to have our ceremony and reception at The Club in Birmingham, Alabama. We knew early on in our engagement we wanted to get married outside. The Club is iconic for its views of the city, so we had our ceremony on the terrace. What made the terrace extra special is that you can see the overlook where Scott proposed from where we said our vows. In addition to the beautiful views, we wanted to have a focal point to help make the space feel intimate, so our florist created a beautiful arch with flowers and greenery. It was the perfect nod to our love of the outdoors, and helped make the terrace feel personal. 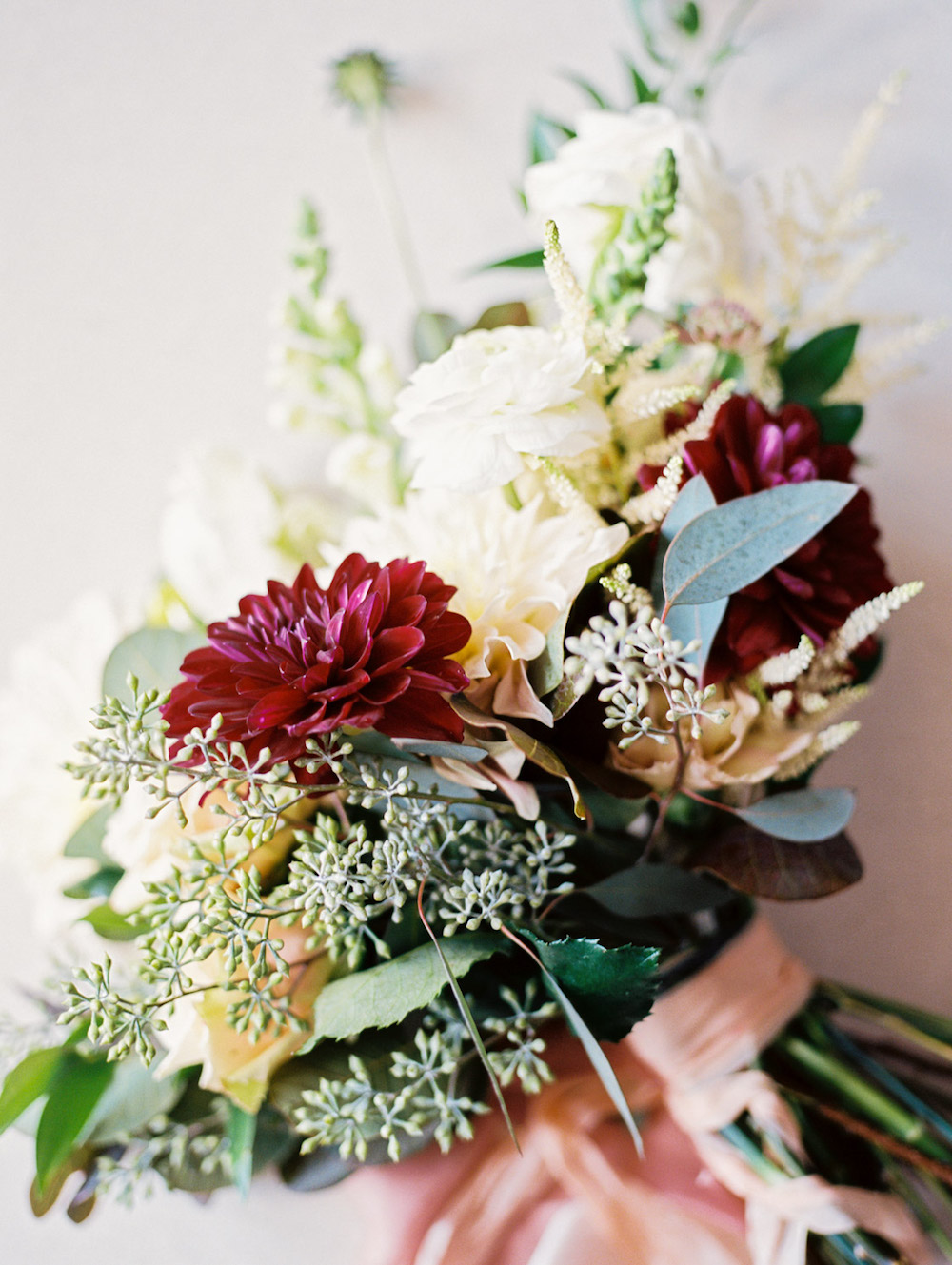 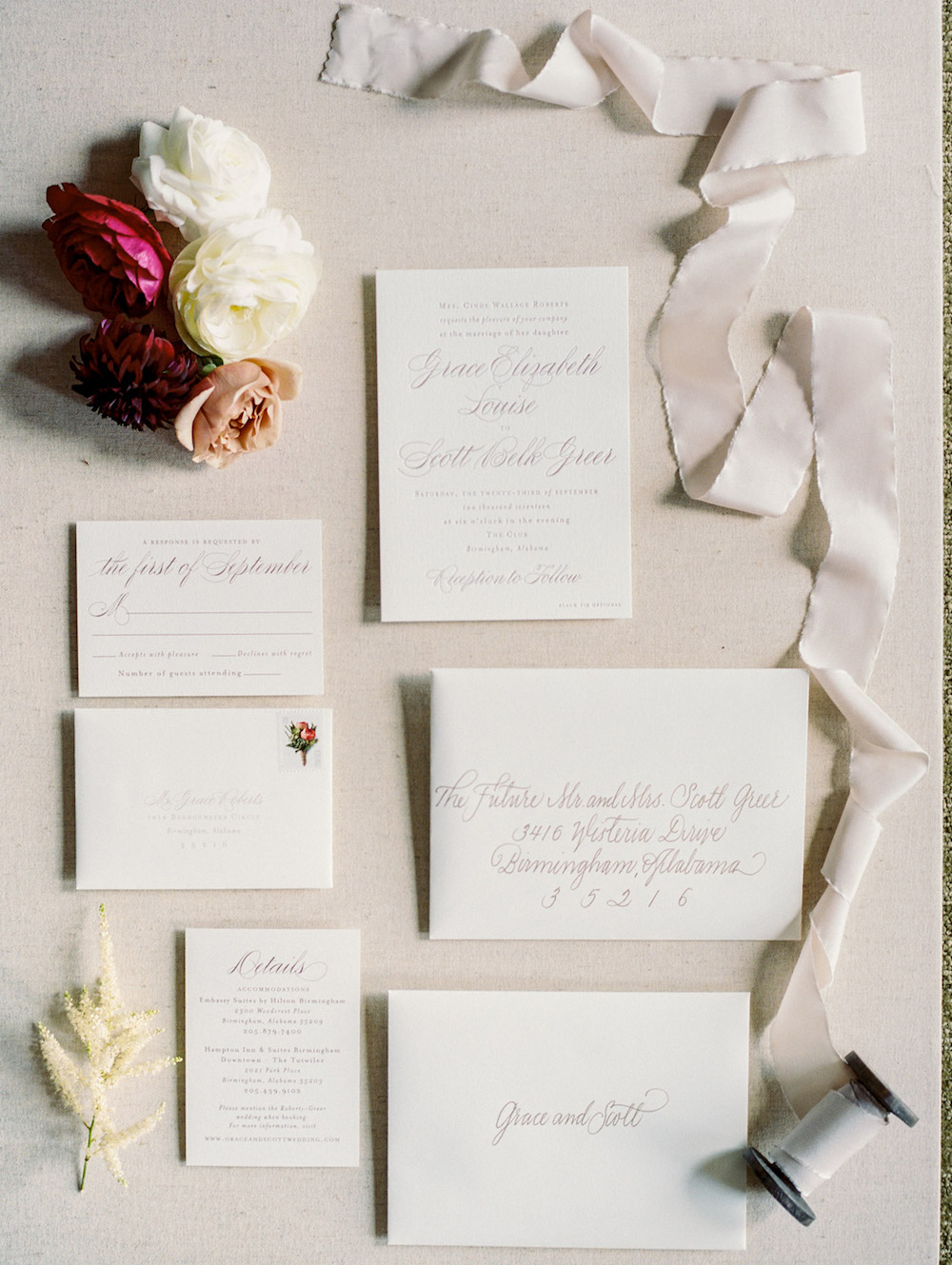 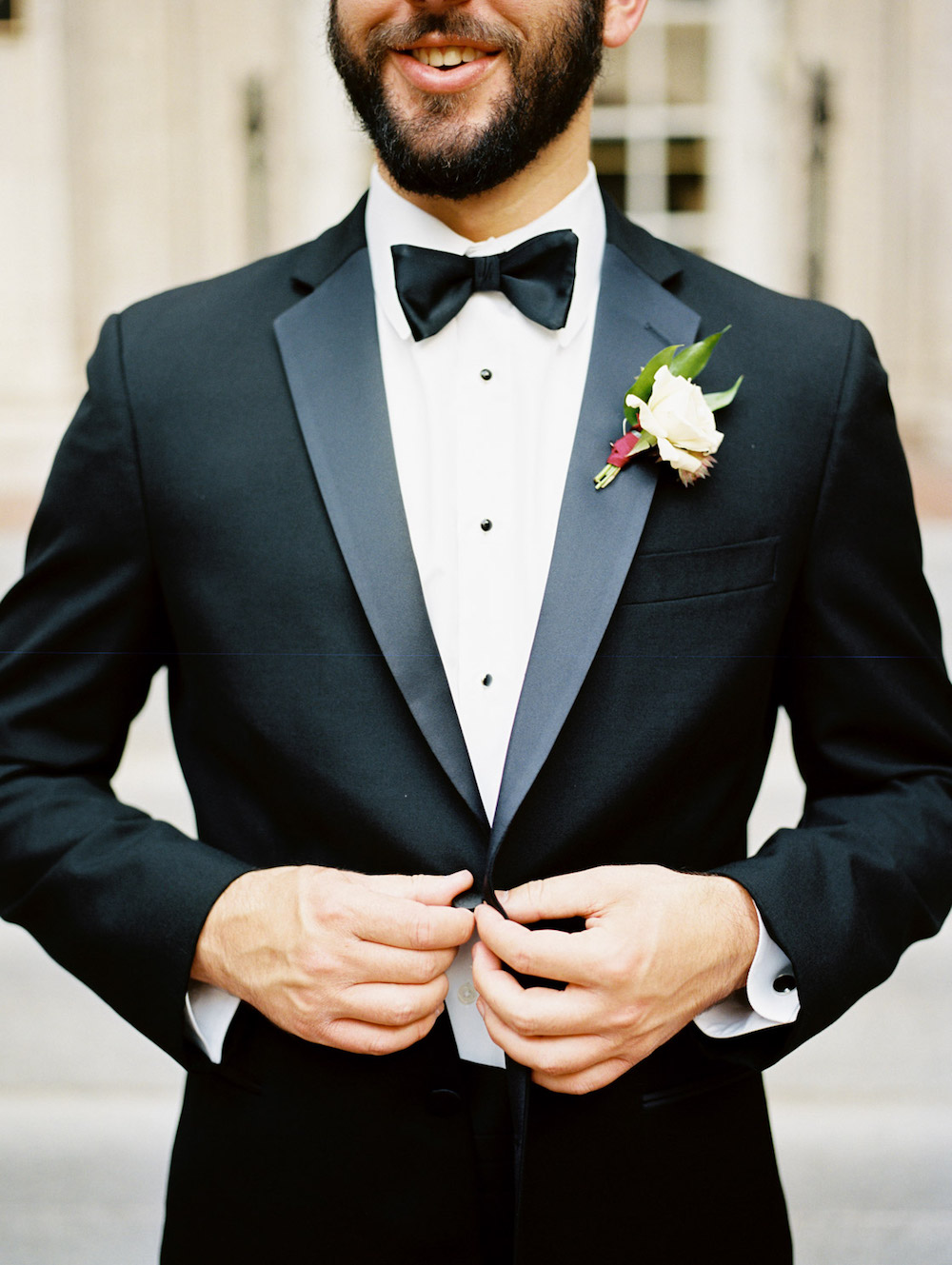 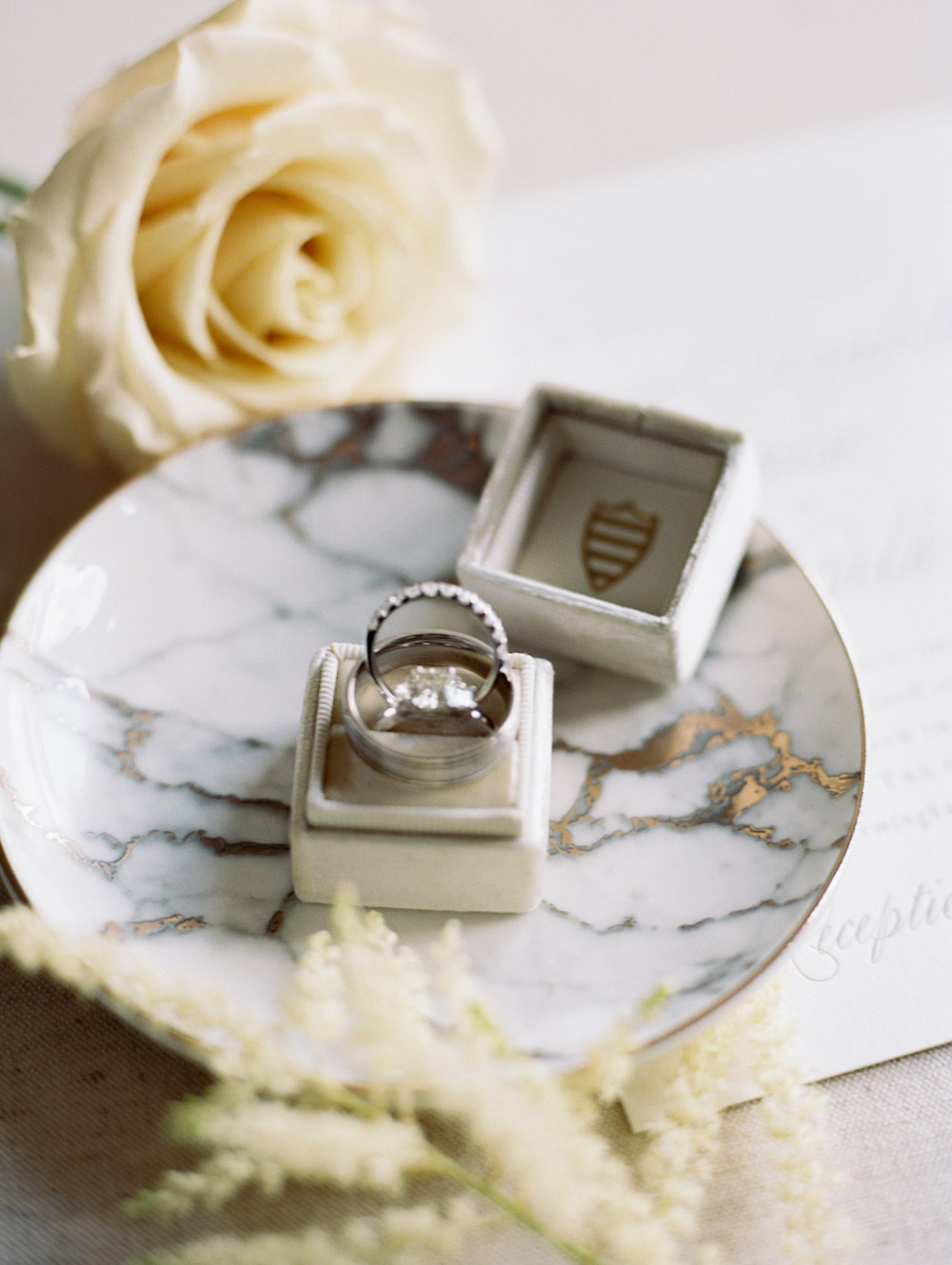 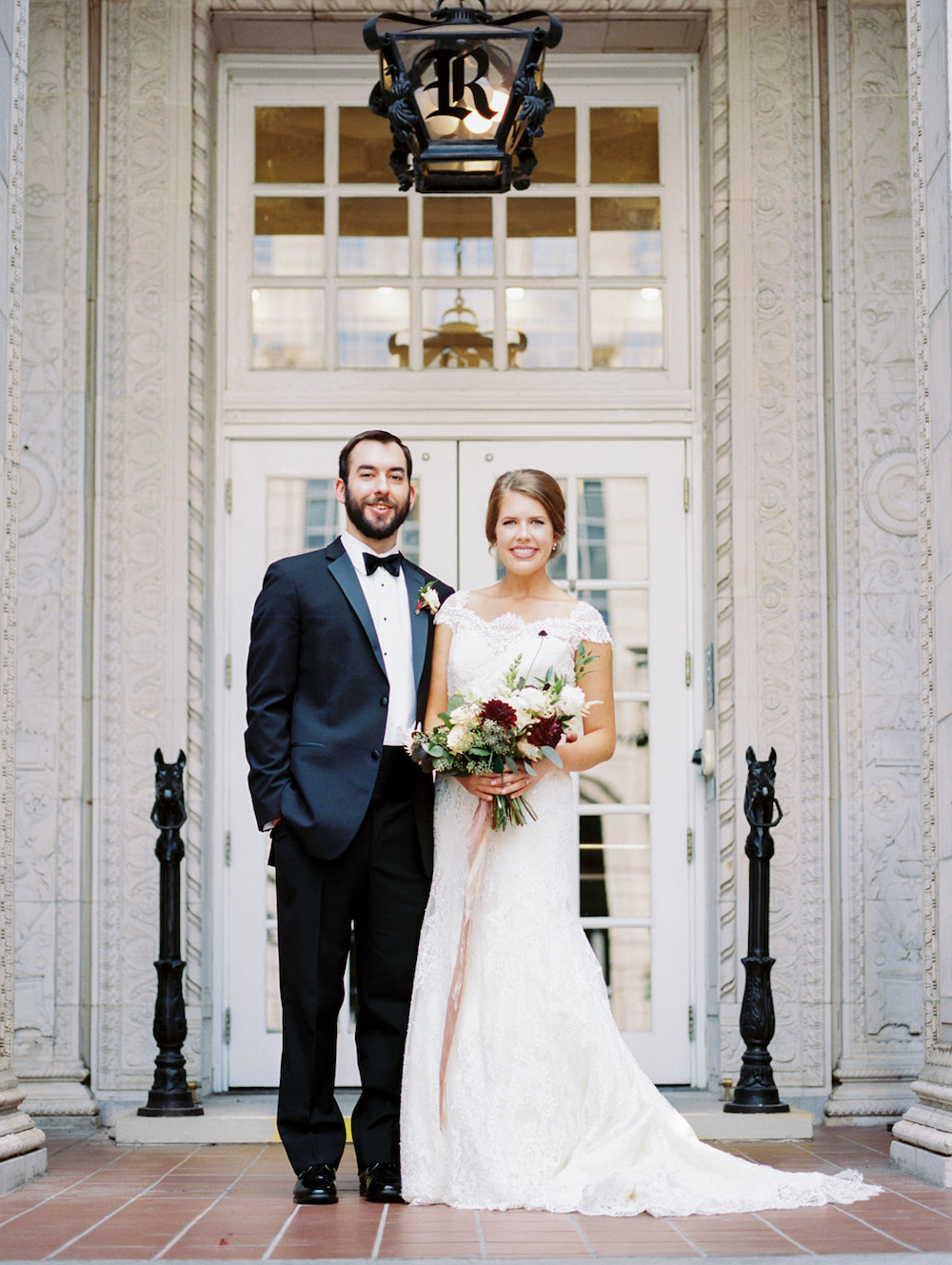 I searched and searched for the perfect gown and found elements I liked in a lot of dresses, but not everything all in one. When I went to Carriage House Weddings, my consultant explained how customizable Augusta Jones dresses were. I found two separate dress styles I loved: the shape of the Jessie, a fitted A-line, and the bodice of the Skyler. When combined, both dresses checked all the boxes. Even more, I was also able to select a lace pattern. At the end of the process, I had my own custom gown that was everything I had envisioned. 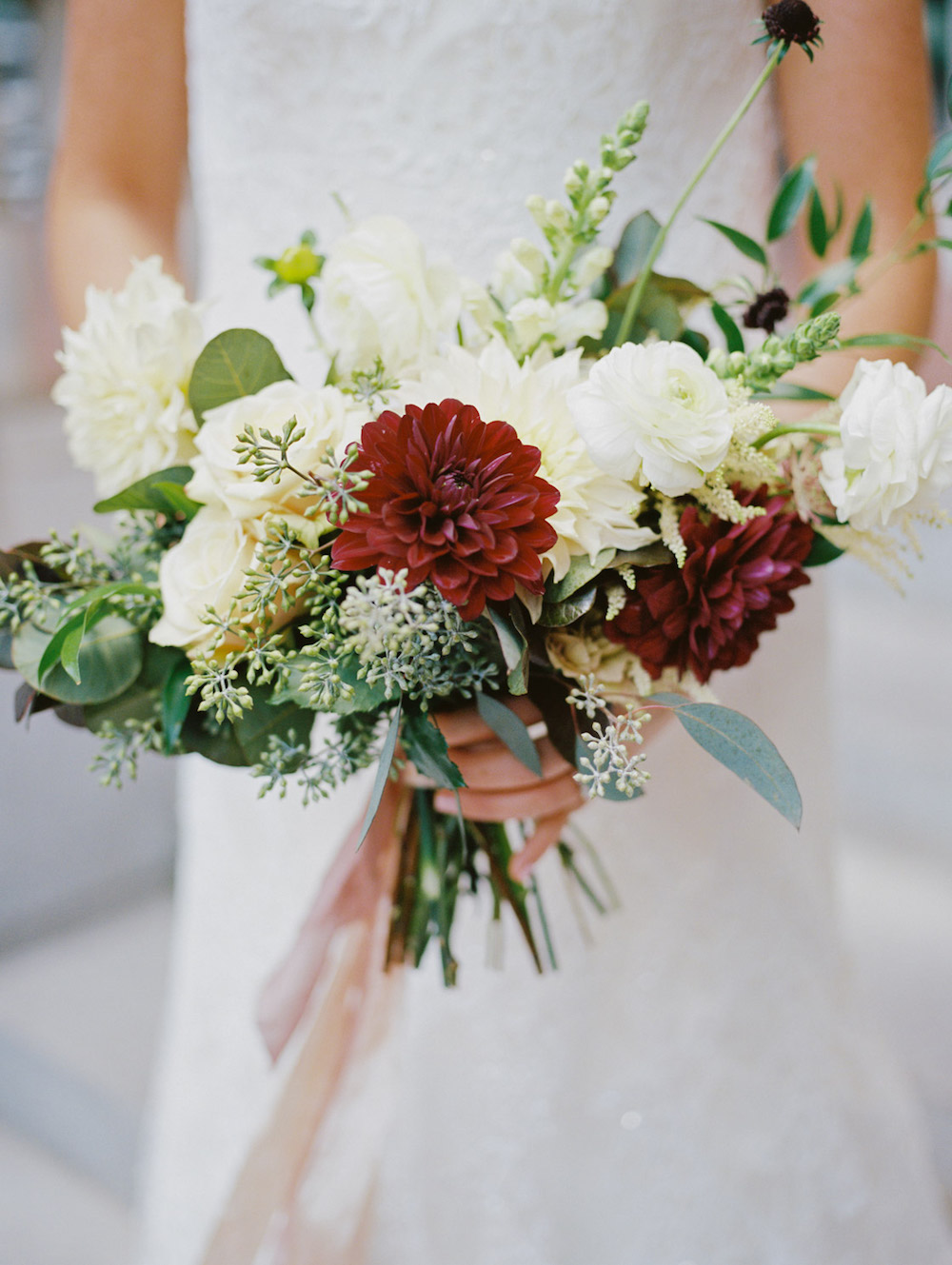 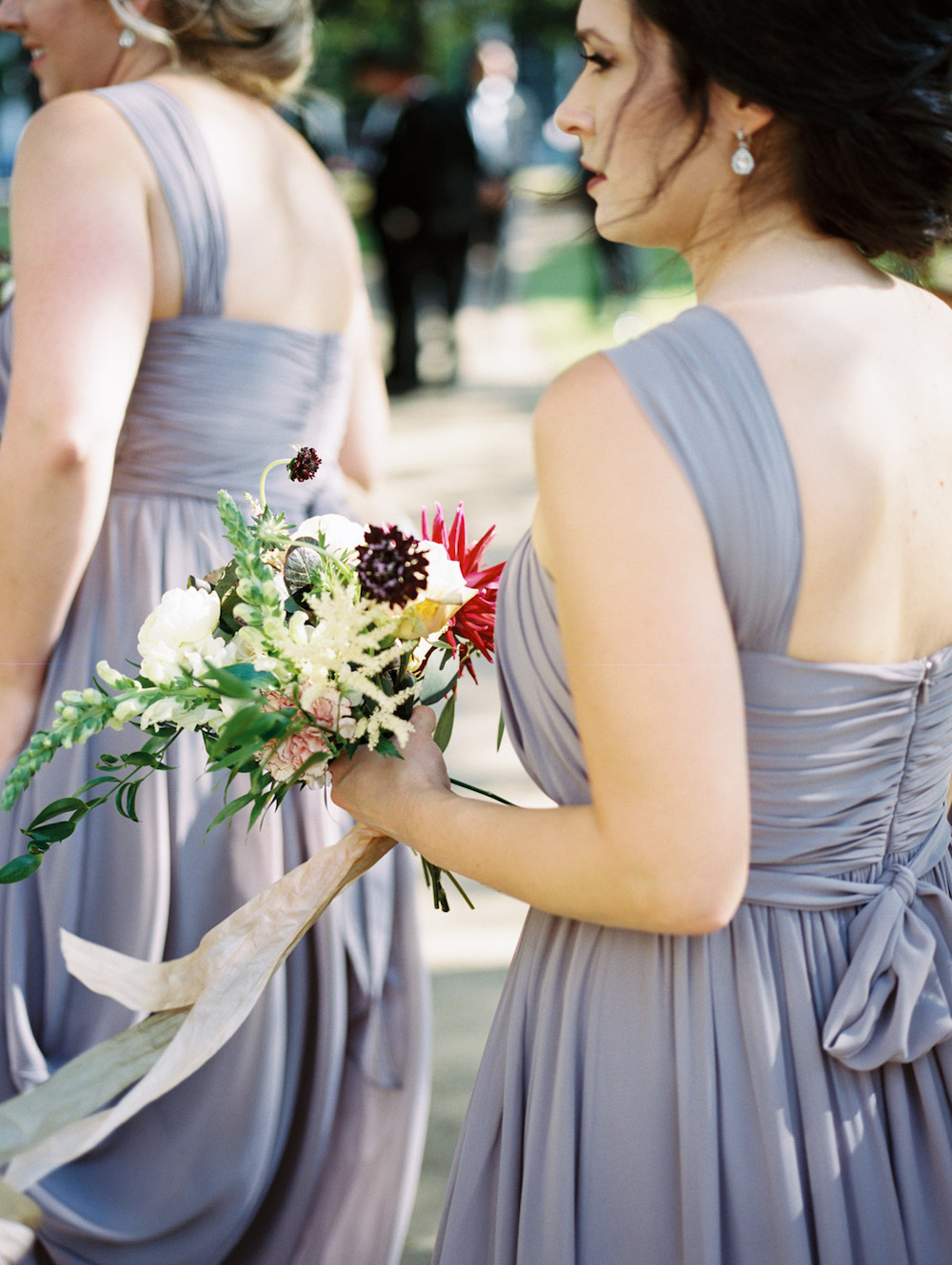 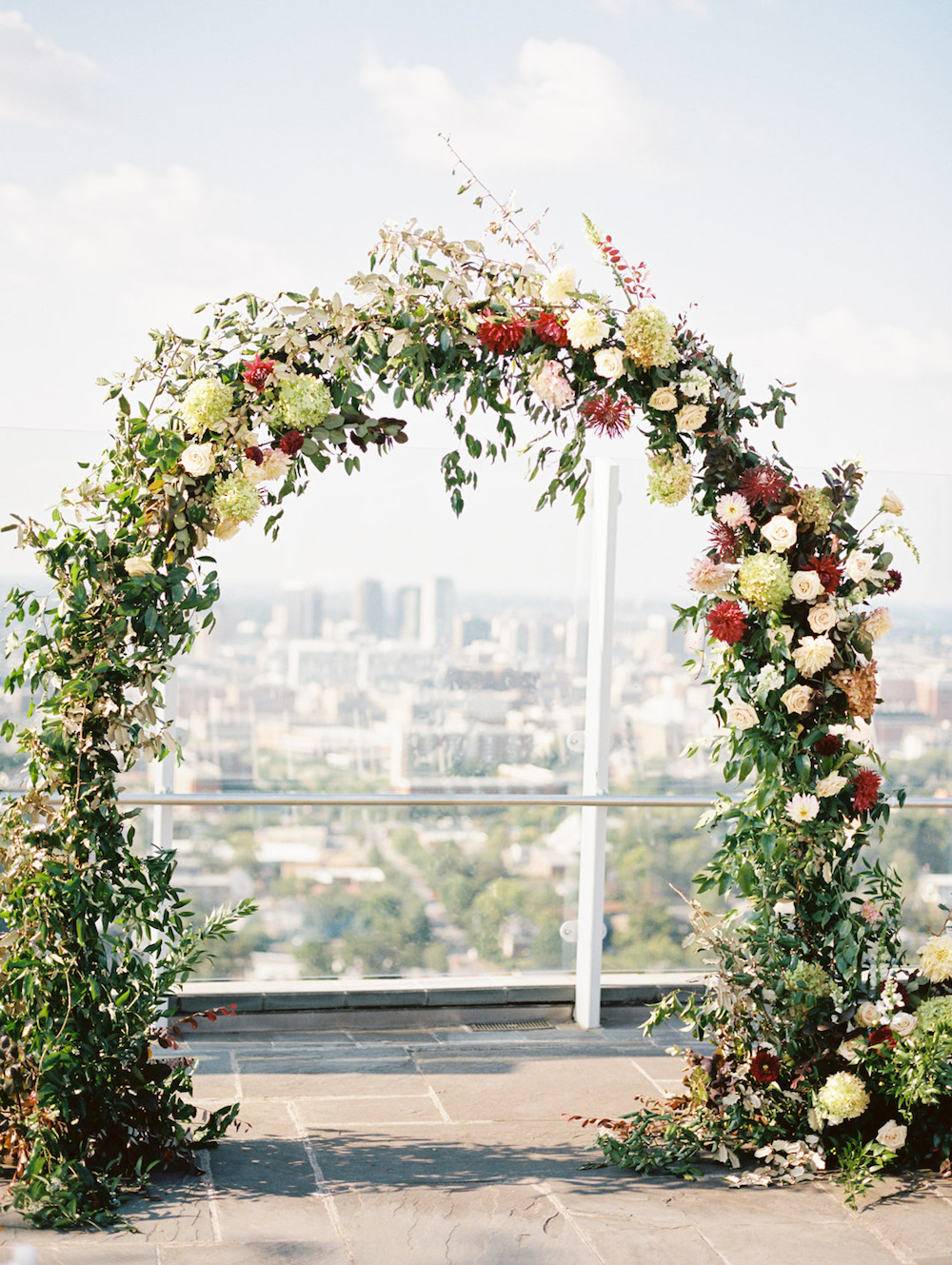 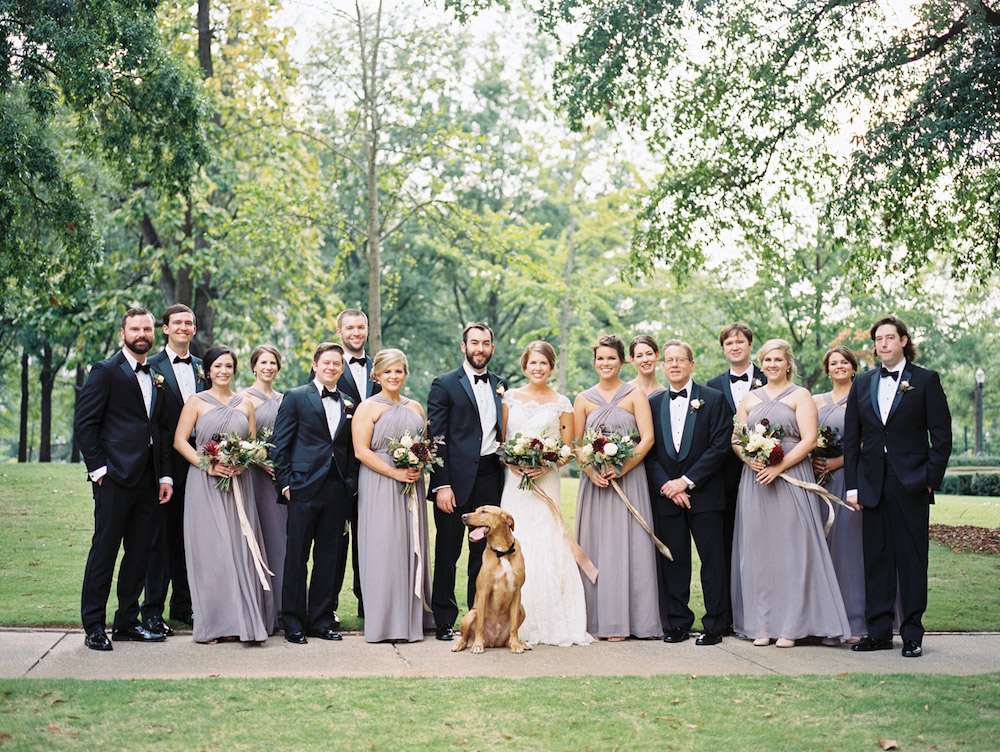 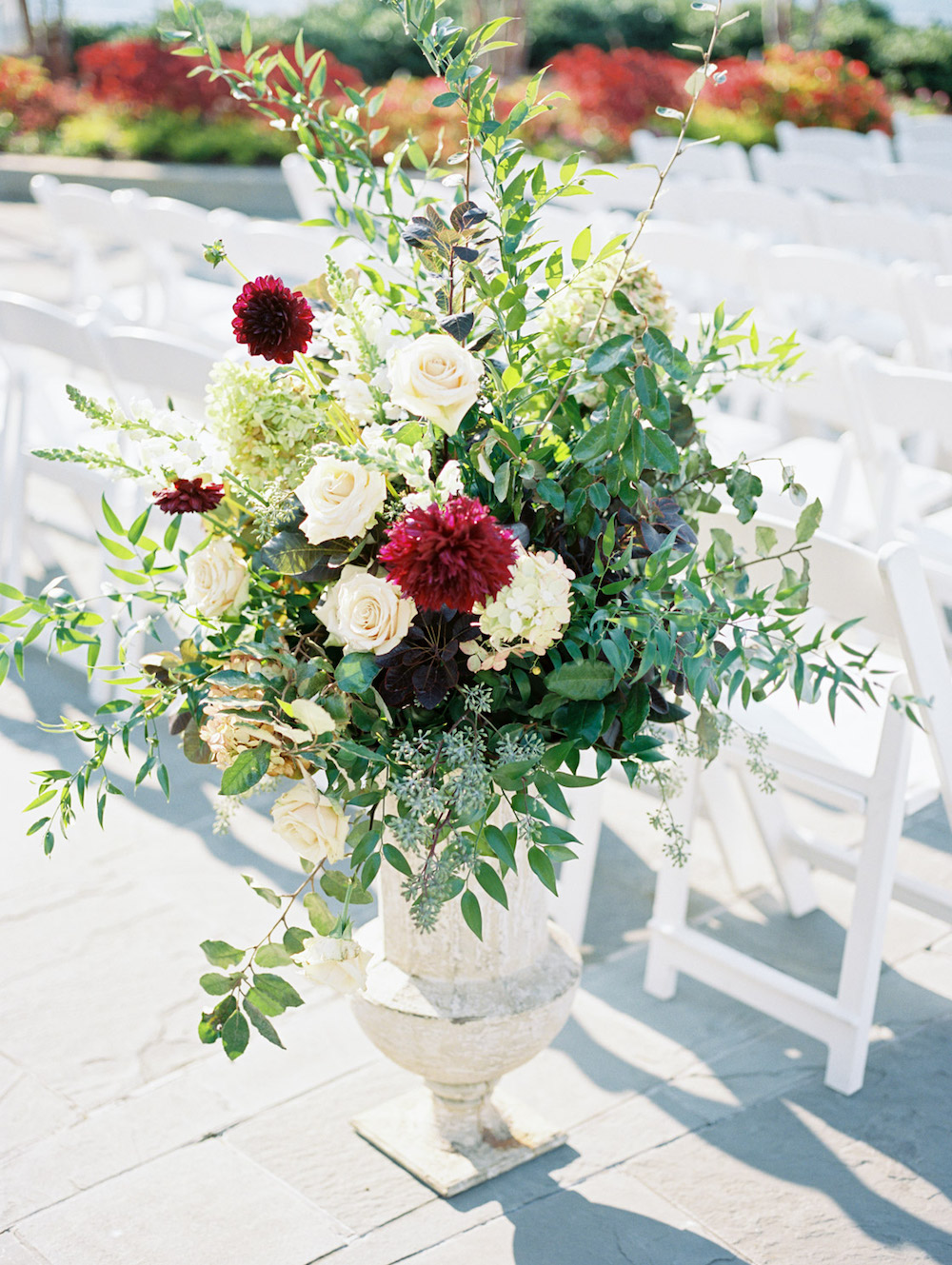 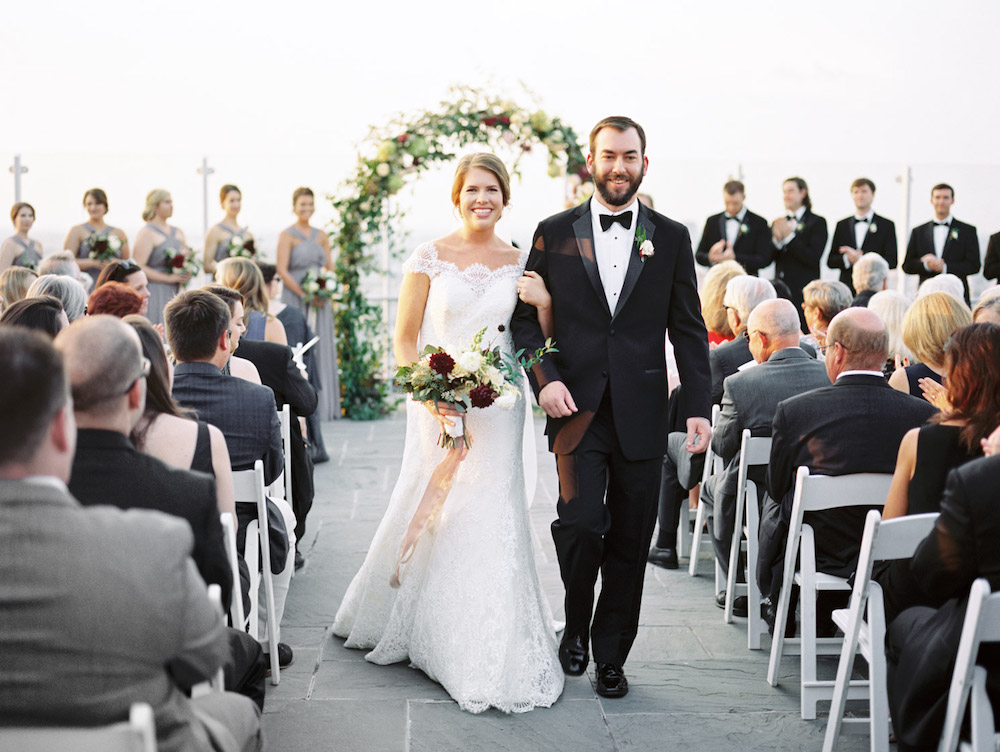 In memory of my father, and as my “something blue”, my seamstress sewed a patch of his favorite blue shirt into a layer of my dress. A boutonniere was also placed in his chair during the ceremony. After a year of dating, Scott and I adopted a puppy  from the local humane society. Needless to say, he’s the center of both of our worlds, so we knew we wanted him to be a part of our day. While although he wasn’t present at the ceremony, a great friend of ours brought him to take photos with us and the wedding party beforehand. He was the only one with an outfit change that day – a floral collar and a bow tie!​

Scott loves to cook, so we wanted to be intentional about our menu. While neither one of us is Greek, we both love Greek food and went to a local Greek restaurant for our first date. We knew we had to have gyros as a menu item, and the chef at The Club was excited to prepare something atypical of the standard southern menu. 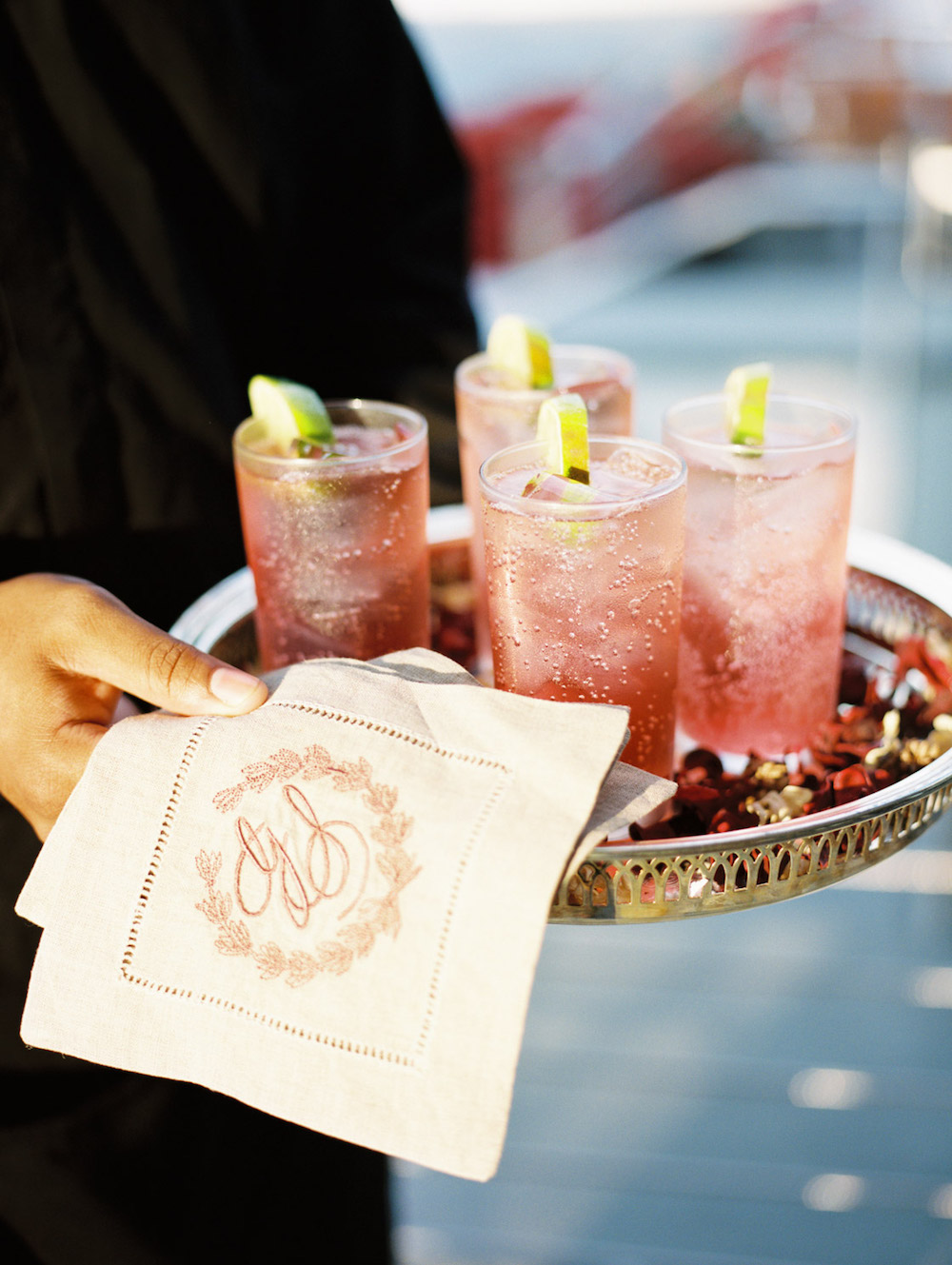 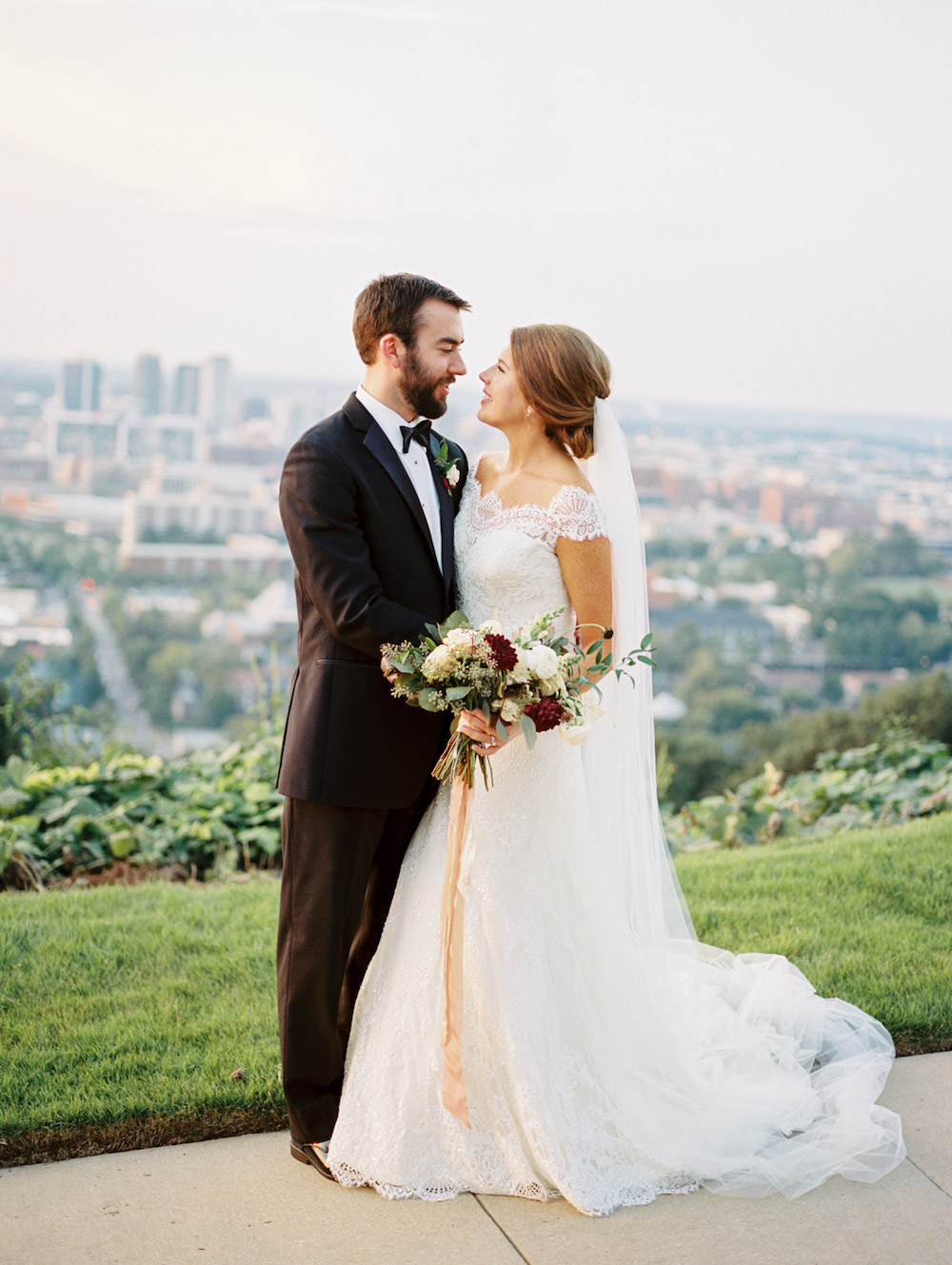 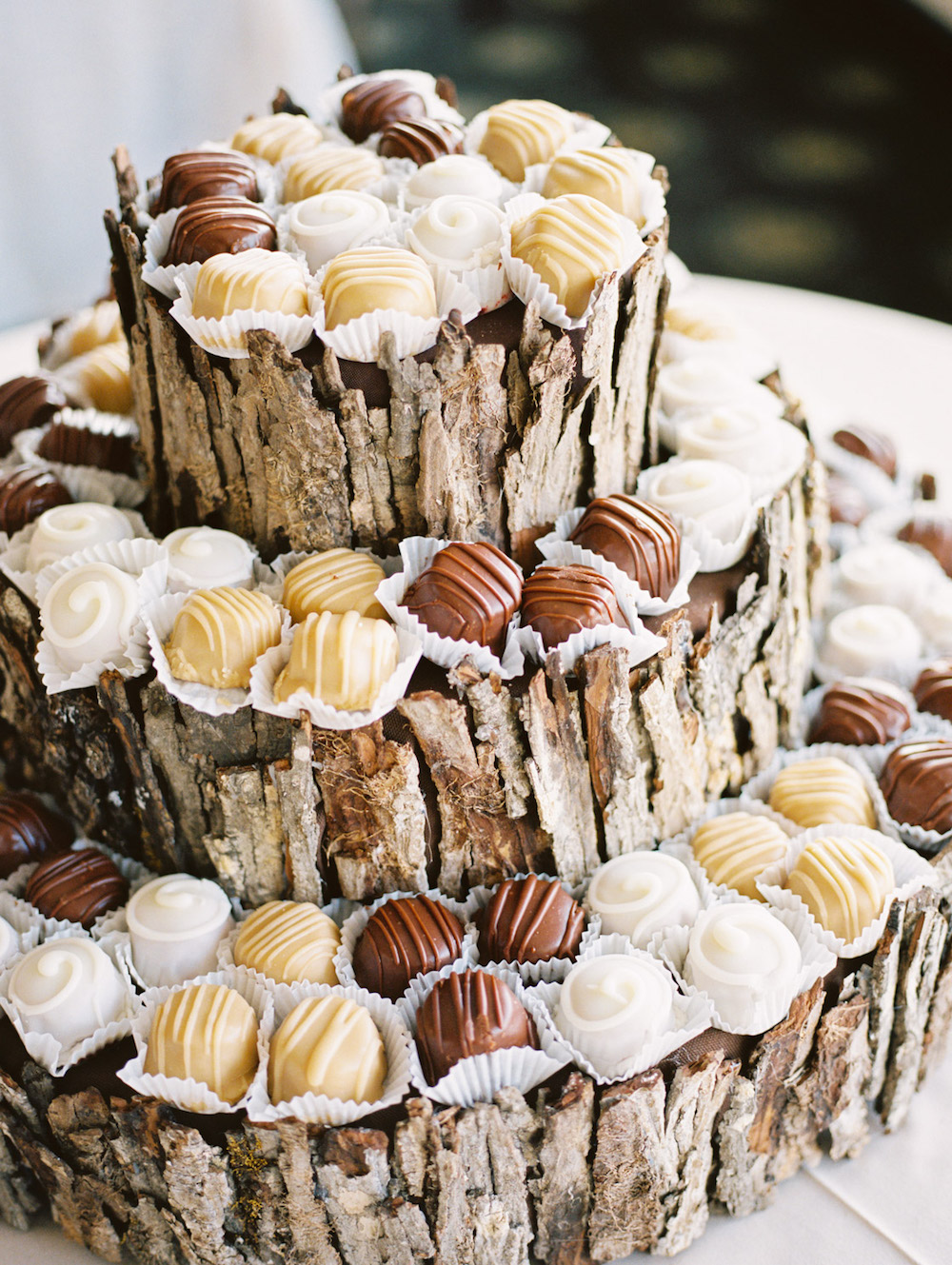 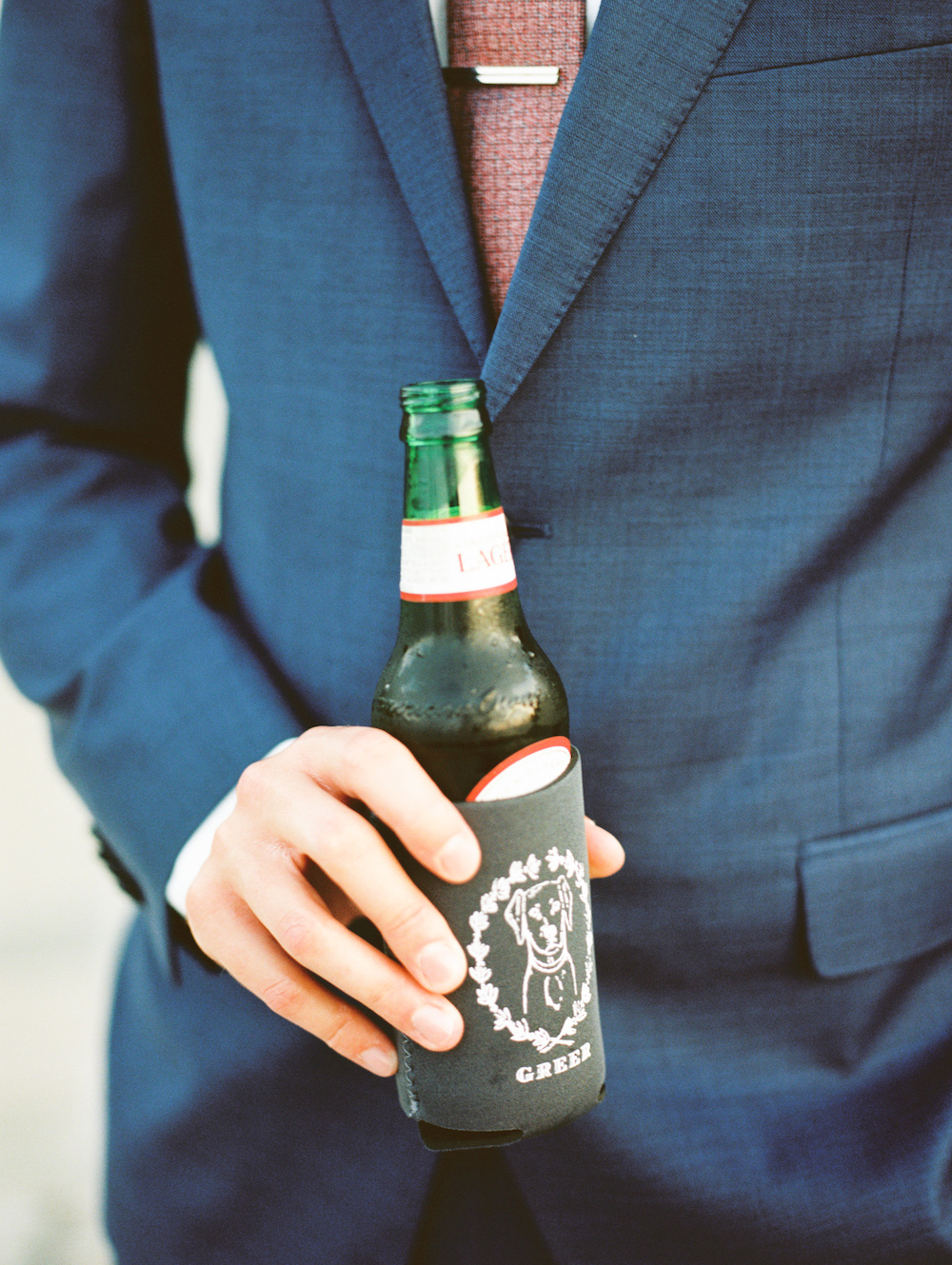 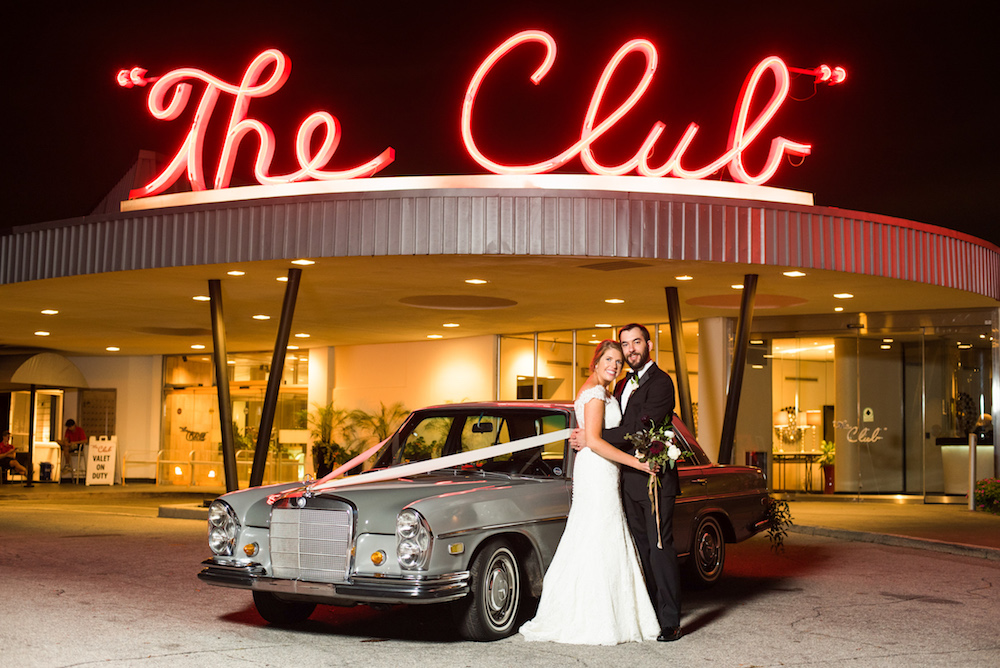 I loved the moments Scott and I shared right after the ceremony. The ceremony was incredibly special, but it was such a fantastic feeling to be married and have some time just the two of us to take it all in. While we were excited to celebrate with our family and friends, we were able to sneak away and our photographers snapped some of our favorite wedding photos as the sun was setting. A mutual friend asked Scott and I to play on an adult kickball team. I’m not athletic in the slightest, but was new to the city and thought it would be a fun way to meet other post grads. Growing up, instead of sports, I took dance lessons, so the emphasis has always been to run pretty, more so than fast. Scott however, played team sports his entire childhood and is very competitive. Fortunately, he put my pointed toe kicks and graceful running aside. I never scored a run that season, but we became more than teammates by the end of summer. Then, on a Sunday in the middle of October, Scott asked me if I wanted to take our dog on a hike. I absolutely love the peak of the fall season, when all of the leaves are bright red, orange and gold. The fall foliage in Birmingham was at this point, so I was especially excited to get outside. We headed to Ruffner Mountain, a meaningful place to both of us, and hiked to the overlook that oversees downtown. I was checking out the cityscape, and when I turned back around, Scott was on bended knee. Extra special note: you can see the overlook where Scott proposed from the very spot we said our vows on the terrace of The Club.