Sean Money + Elizabeth Fay can be thanked for gracing us with the glory of Chris and Shelby’s wedding. And that dress. That beautiful blue dress. We die! 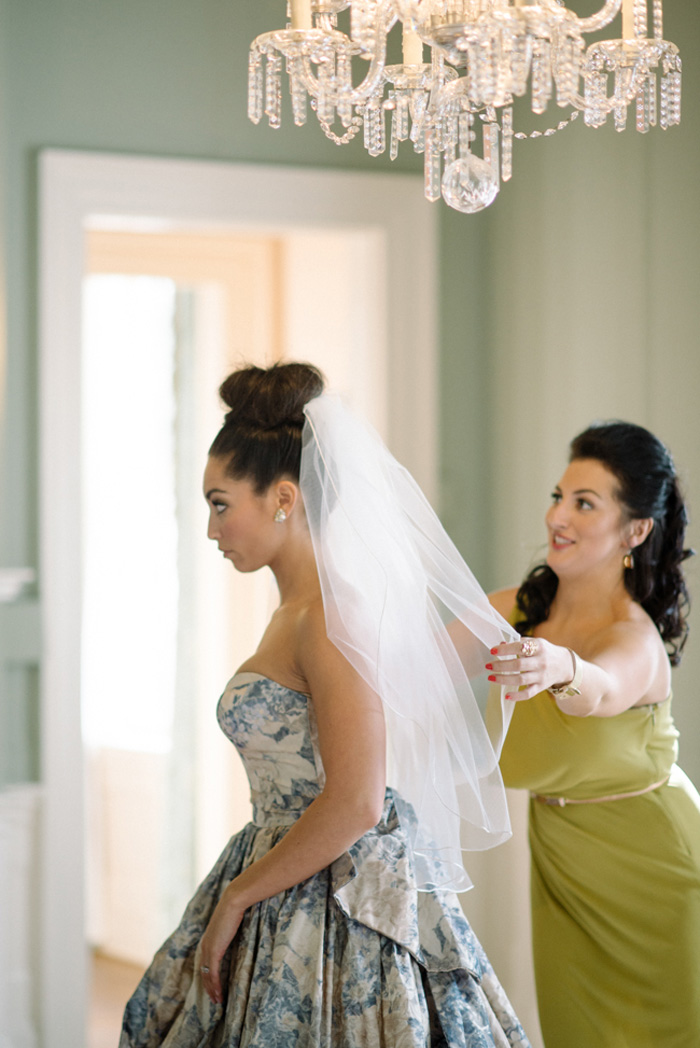 Chris and Shelby met in NYC while she was visiting the city on business from Oregon. And that was it. 4 months later, Shelby hopped a plane and moved to NYC to be with Chris. Chris proposed to Shelby during her birthday trip to Mont-Tremblant, Canada in June of 2012. Chris had the proposal planned just right until he saw the dock where he planned to propose overloaded with swimmers as part of a triathlon! Chris then improvised and decided to make it a family affair by proposing during brunch in Montreal later that day with their family and friends all together.Shelby and Chris wanted an small, outdoor to-do for their September wedding, so they decided on Lowndes Grove. Lowndes Grove is one of those perfect Charleston venues because it is very close to the main downtown area, so guests can easily explore and experience the culture of the city, but it is just far enough away from the hustle and bustle for an intimate southern affair. The plantation is located right on the water with gorgeous oak trees and a stunning plantation home to design around. 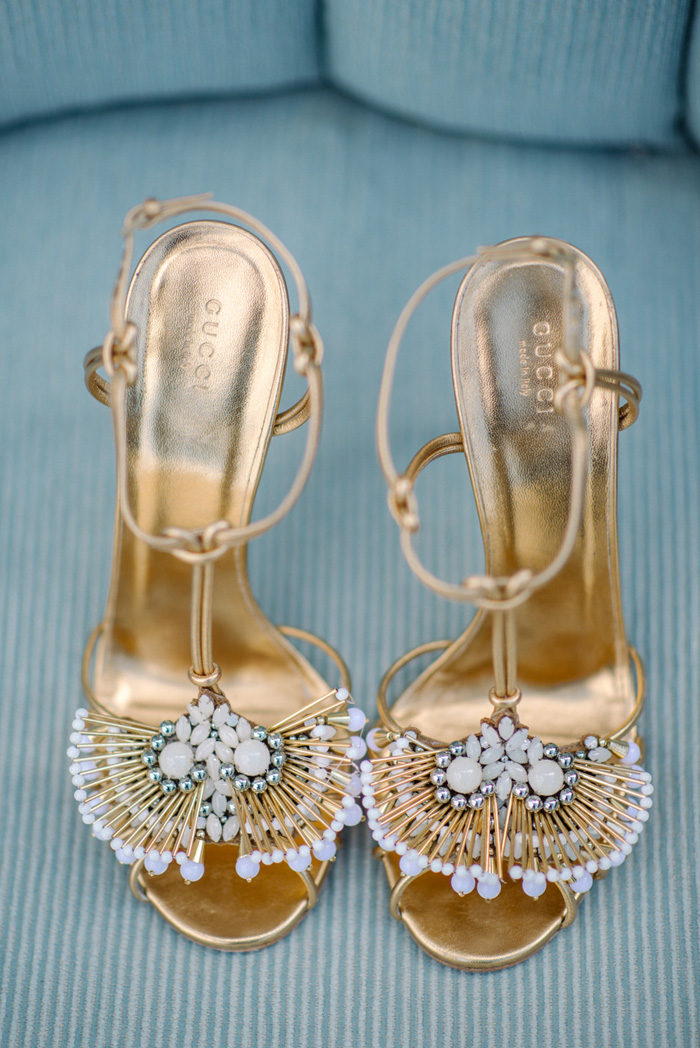 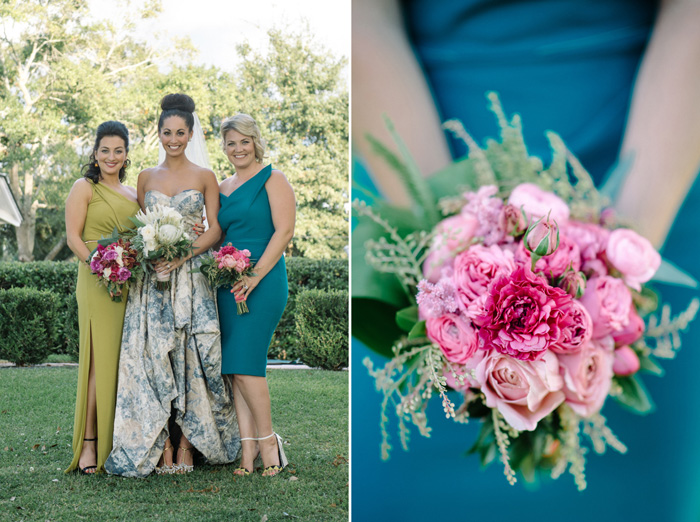 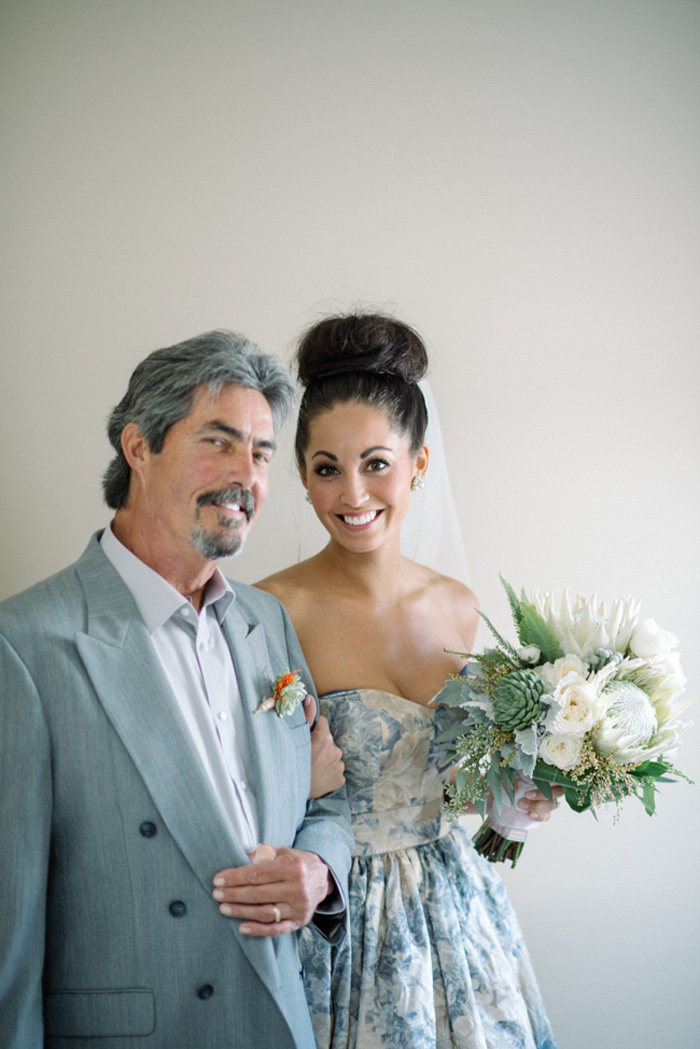 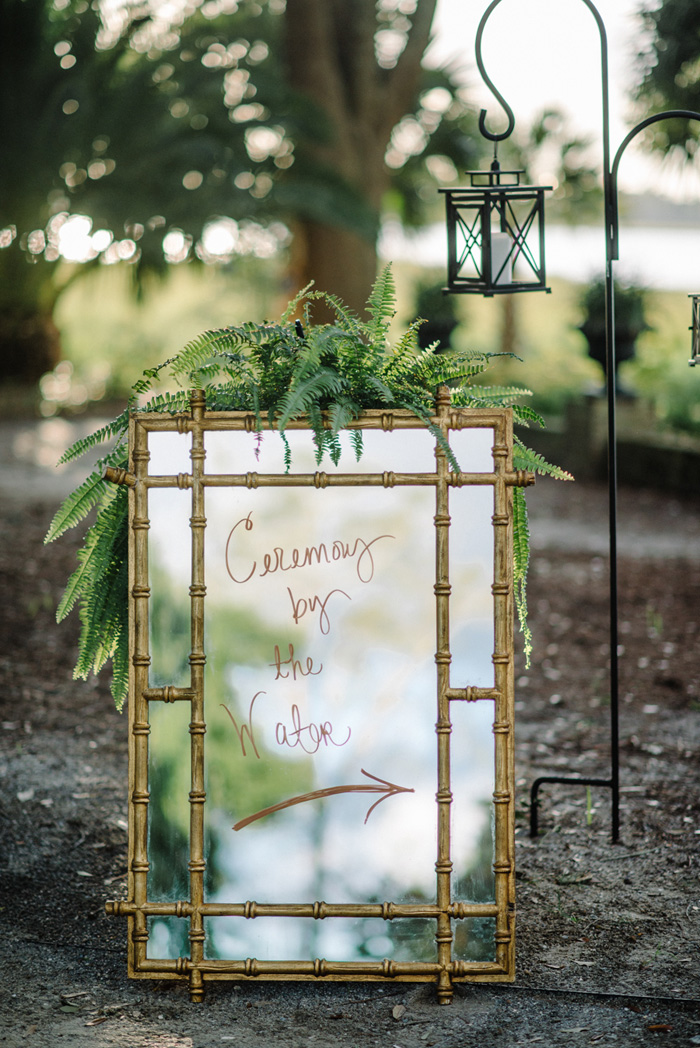 Shelby’s dress was to die for. She found it at London Bride Couture when she and Chris were in London for his job. She strayed away from the traditional white gown by picking out a stunning YolanCris blue and ivory gown. She added a train and bustle to give it a more bridal look. Shelby’s gorgeous bouquet consisted of pincushion protea, piano garden roses and succulents in shades of pale green and ivory. That was carried over to the arch that they married under – pincushion protea, hanging amaranthus and succulents. Bridesmaids had bouquets of garden roses, cymbidium orchids,amaranths and cockscomb. She did not pick out dresses for them, but rather gave them an idea of what the bouquets would look like and left the fashion up to them. And their dresses couldn’t have worked out more perfectly. 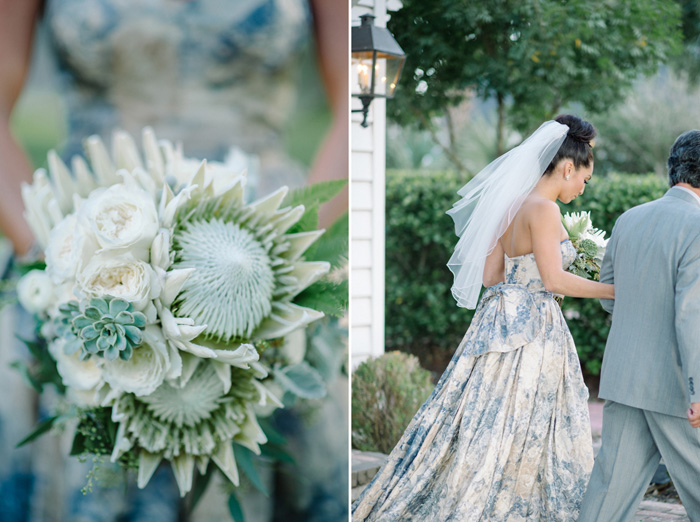 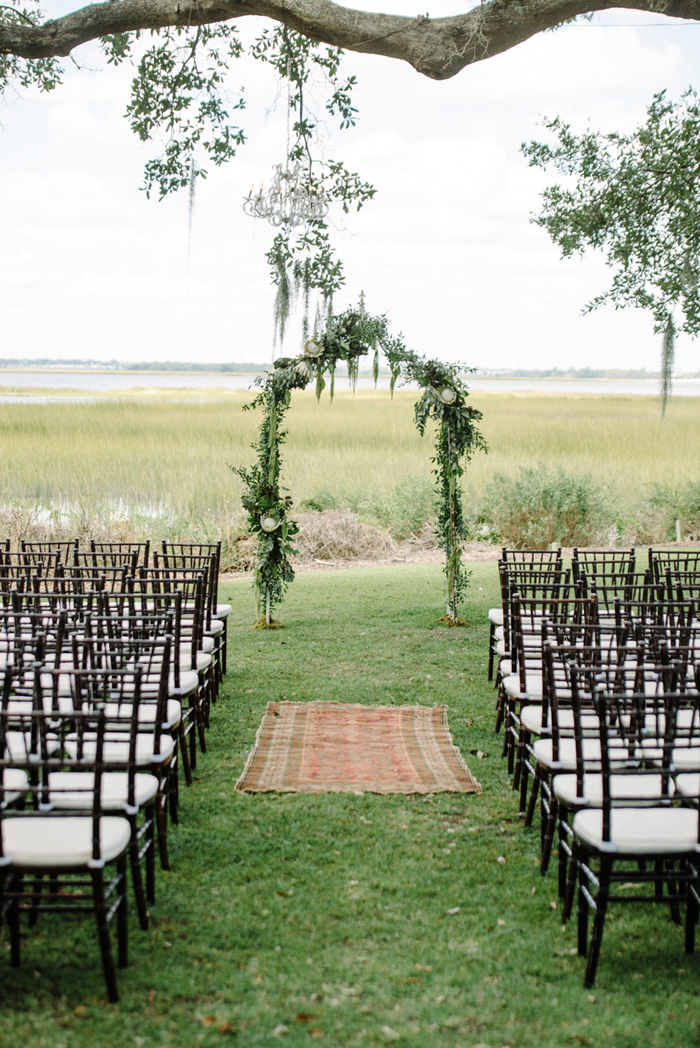 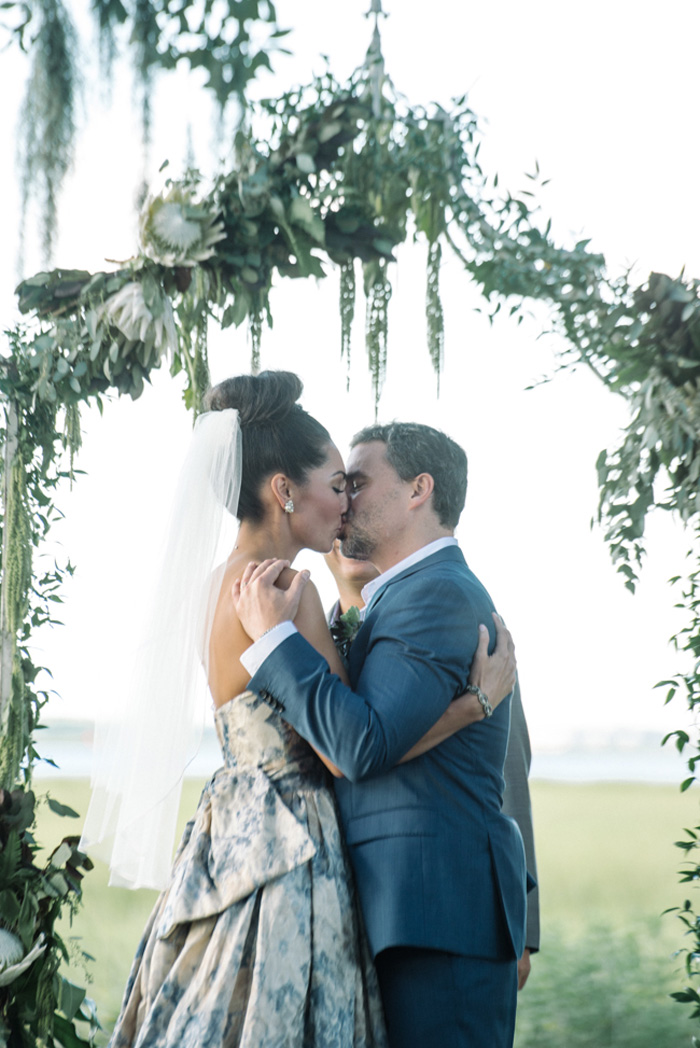 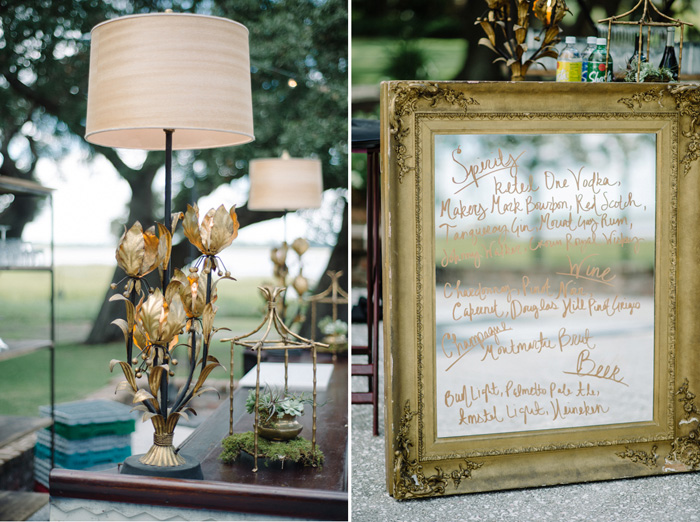 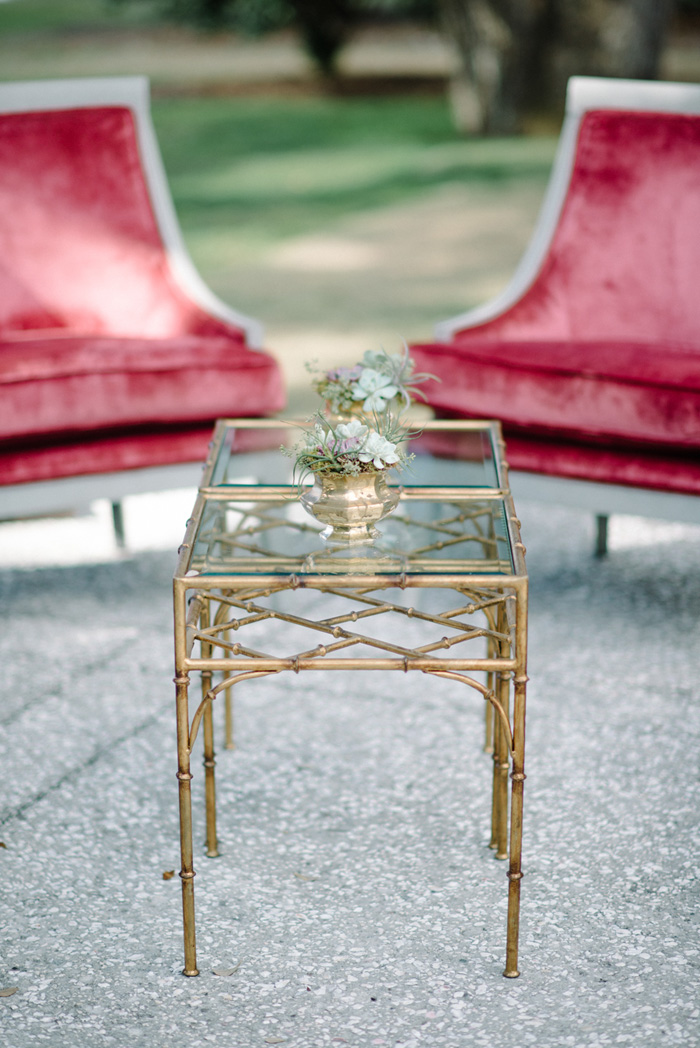 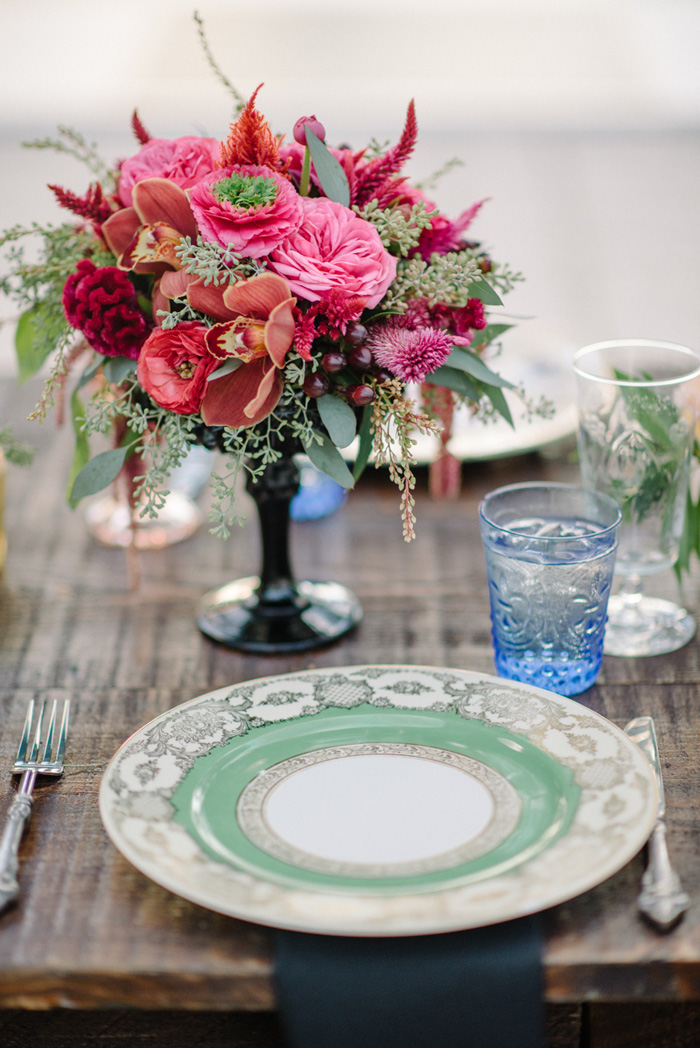 Ooh! Events helped them bring their style to the wedding day with a fantastic selection of vintage and modern furniture, mix and match china and glassware, vibrant florals. Jewel tones mixed with gold, black, and white were perfect for Shelby and Chris’ fun and adventurous personalities. And the cake was nothing short of perfect to match the whole aesthetic. The venue’s sister restaurant Fish does all the catering. Hors d’oeuvres during cocktail hour included tuna tartar, pear and almond brie, shrimp and soft Gouda grits on an edible spoon and duck confit on a steamed bun. Dinner included a sushi bar, braised short ribs with haricot vert and shallot salad, boursin mashed potatoes and a prima pasta station with rosemary marinated chicken, porcini mushroom ravioli, potato gnocchi with Parmesan cream and local basil pesto served with crimini mushrooms and peppers topped with shaved Asiago cheese. A paella station featured shrimp, mussels, saffron rice and chorizo with roasted peppers and Spanish salad. ”We didn’t have assigned seating because we wanted our guests to feel free to get up and move around while eating dinner to mingle amongst other guests,” says Shelby. “We were sort of imagining more of an awesome party rather than a traditional wedding. We asked our friends to dress Southern chic and very casual,” says Chris. “The only requirement was that you didn’t have to wear a tie.” The first dance was perfect. They danced under cafe lights strung above the dance floor, bathed in soft light as the sun was setting. It was a magical moment. And then it was a fantastic dance party until the end thanks to DJ Wade of OtherBrother Entertainment. 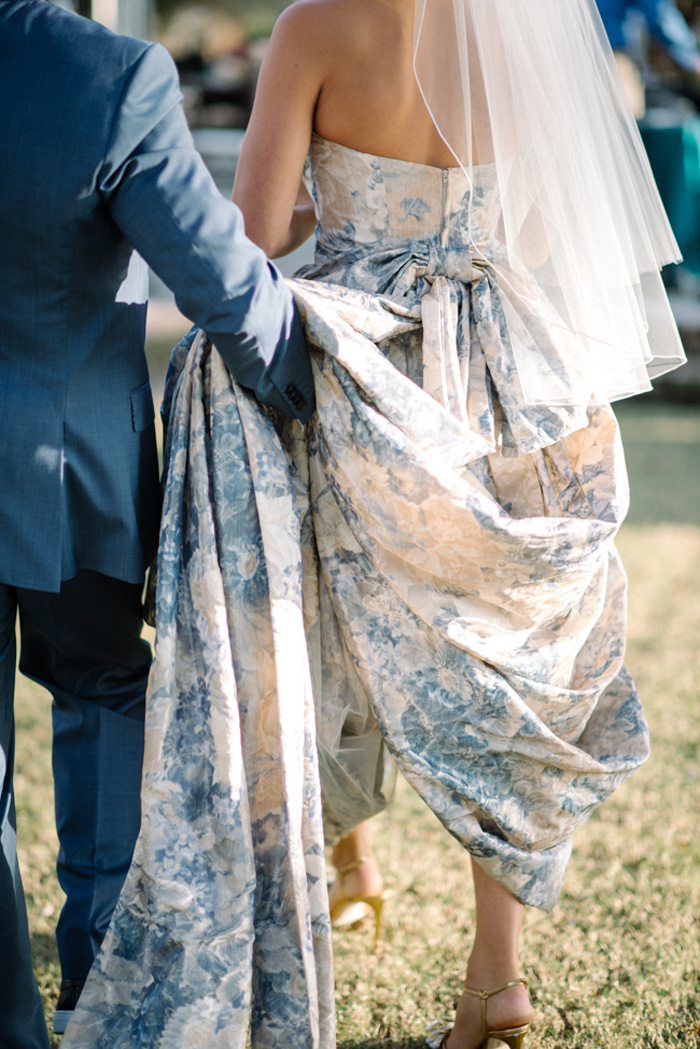 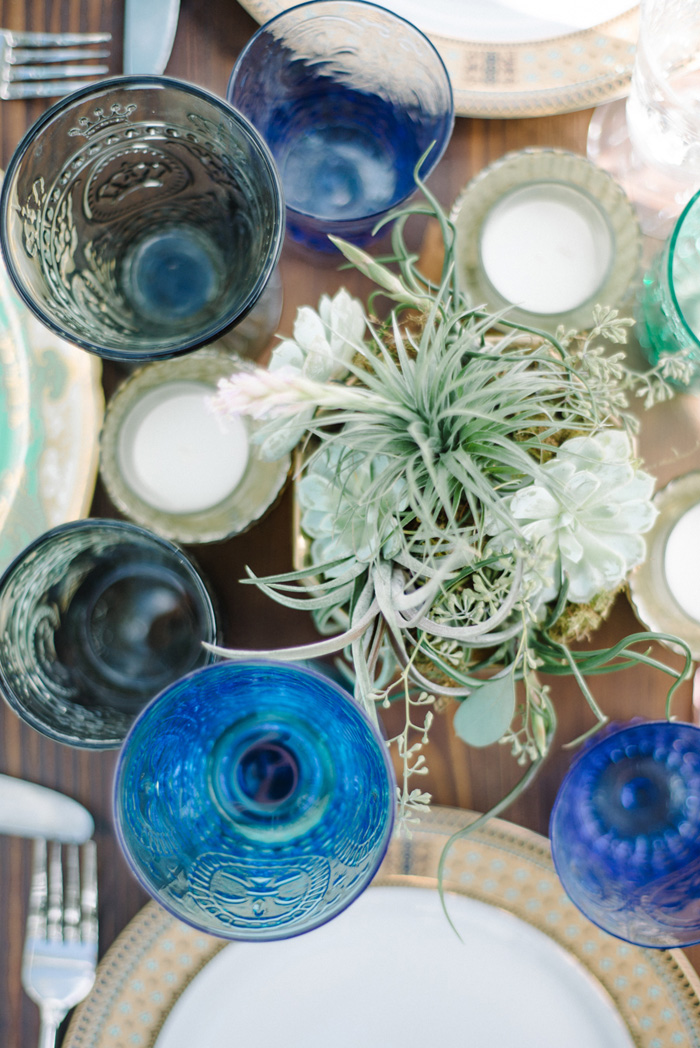 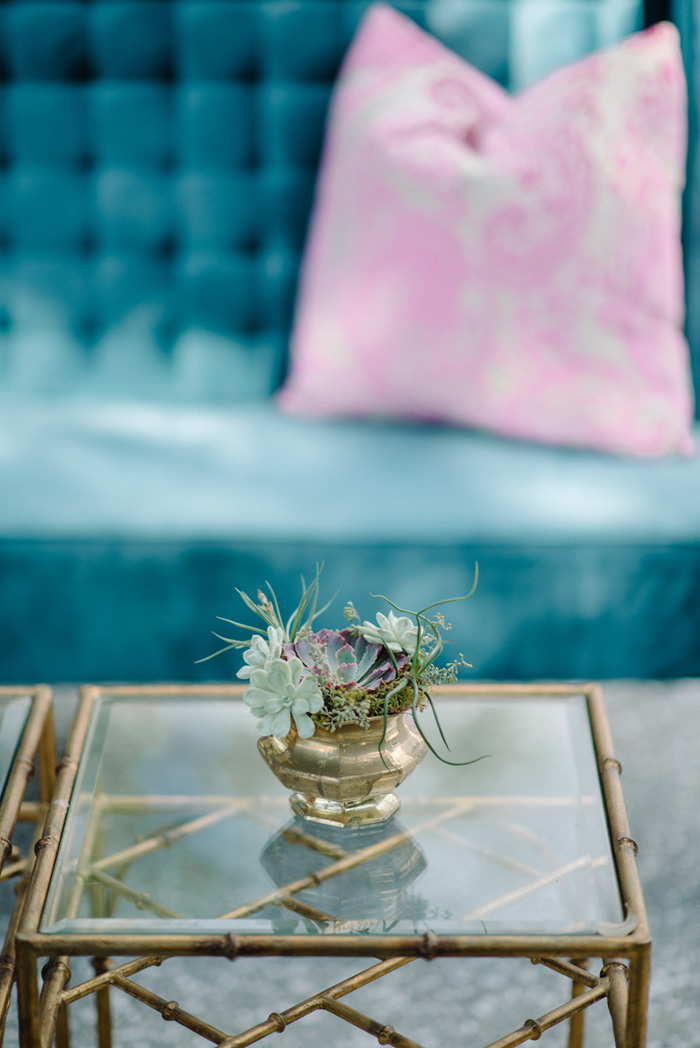 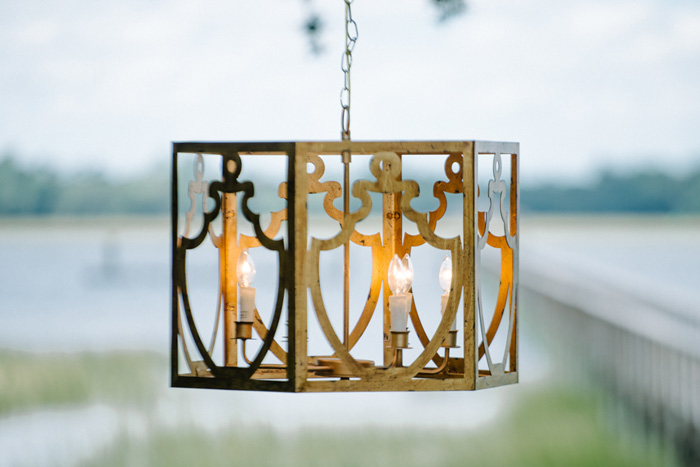 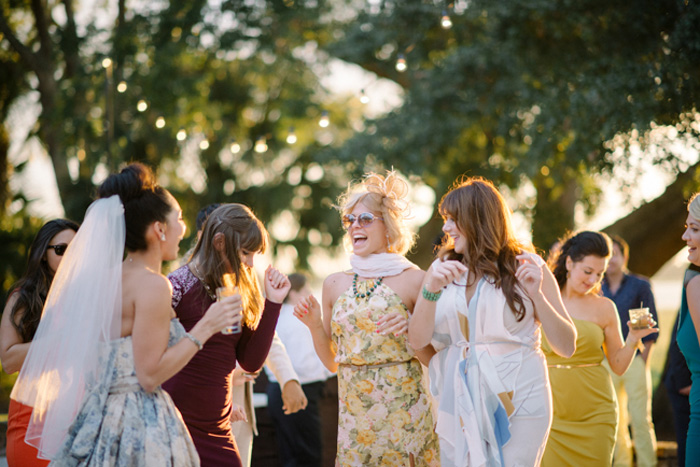 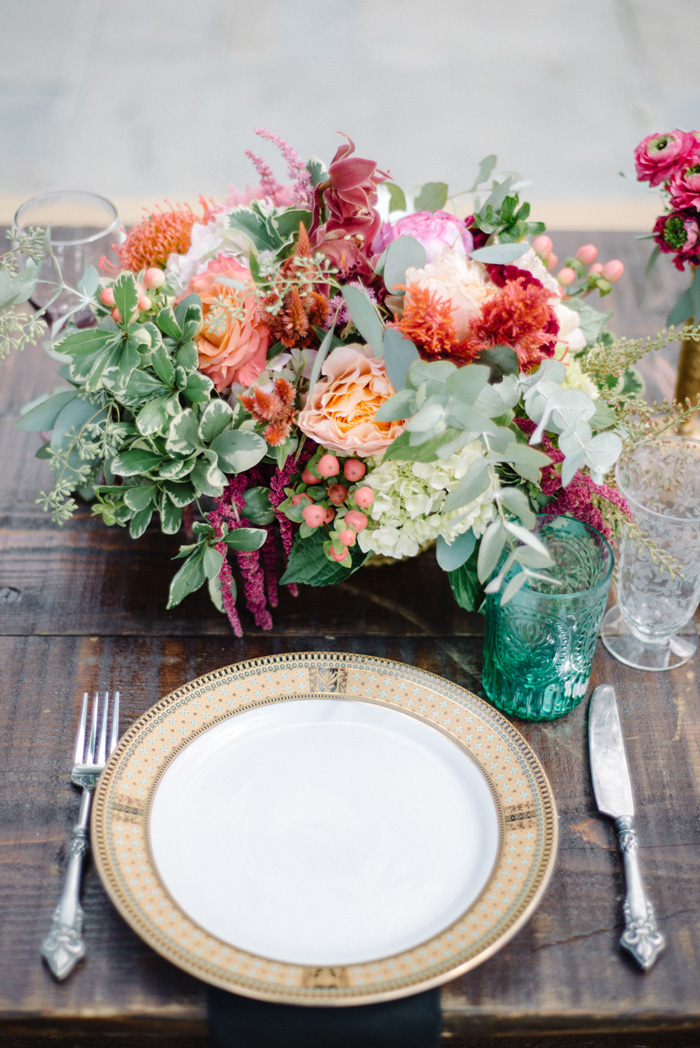 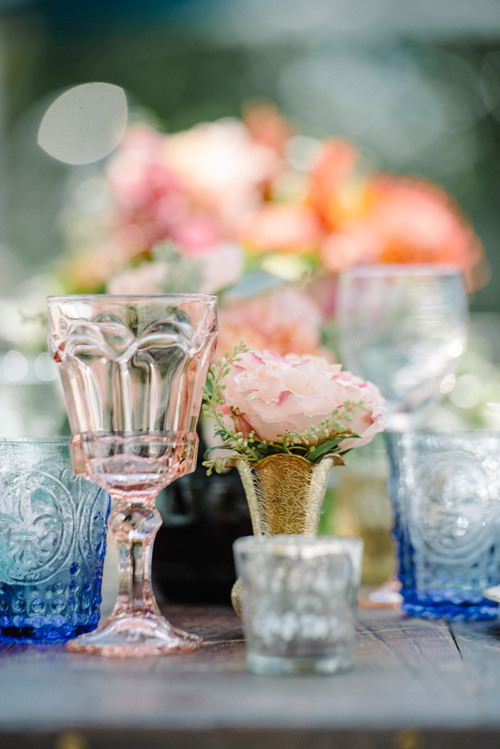 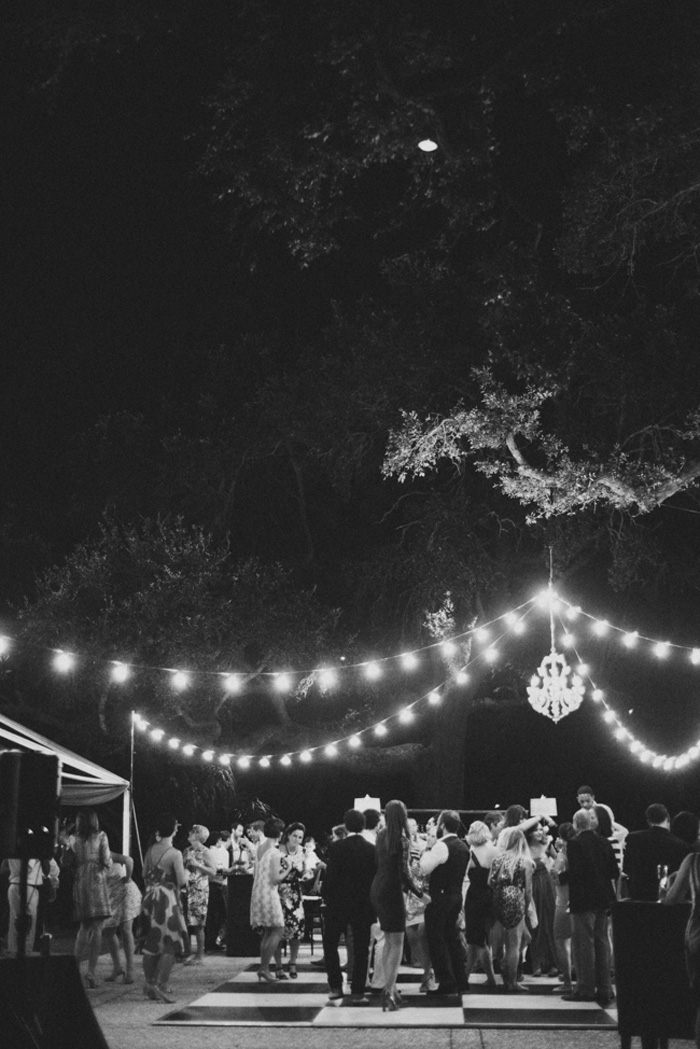