Abigail and Octavian met a half a world away in Romania, and never could have imagined how their lives would end up so intertwined! When the two planned their Oregon wedding, nothing seemed more perfect that the bride’s family home that faces the Columbia River Gorge. As traditionalists, not only was this a sentimental location for the bride, but also because the groom’s mother was married in her parent’s backyard, continuing the tradition seemed fitting. We adore the bright pops of color set against the subtle backdrop of the wild Northwest. Very special thanks to Amanda K Photography for sharing her lovely images! 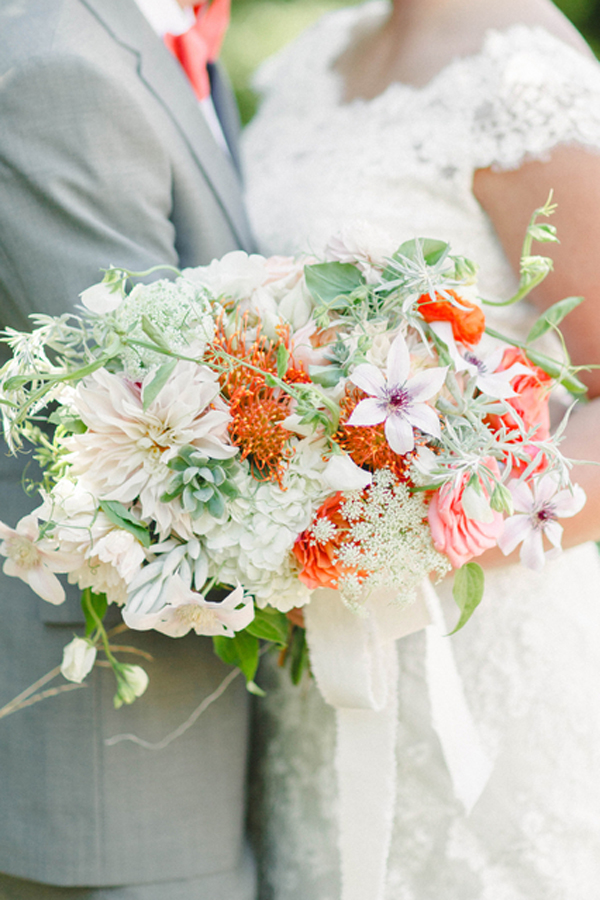 What was the inspiration/vision for your wedding day?

We wanted it to be a family affair with a summer, garden vibe (after all it was an outdoor wedding). My style is more timeless and organic while Octavian leans more modern and contemporary in his likes. So thanks to our amazing designer, our wedding turned out to be all of these elements in one.

Tell us about finding your wedding dress.

No task has caused me more stress and joy all at the same time. I knew what I wanted, and in the end, I think that’s what made it so difficult to find “the one.” I did not try my dress on before I purchased it because the only size available was too small for me. Instead, my sister, who is smaller than I, but similar in shape, try it on. It was so much of what I wanted that I took the risk buying it, and it was worth it! 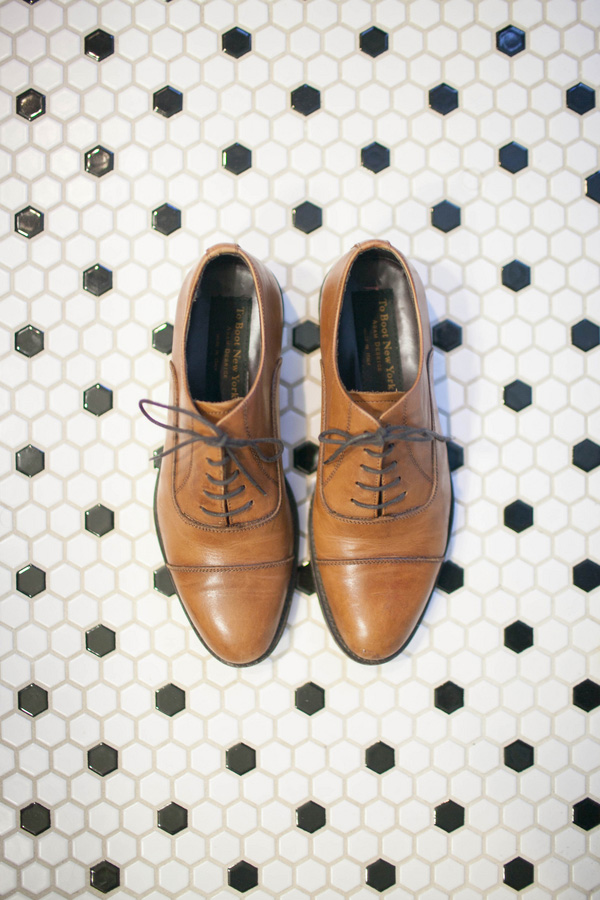 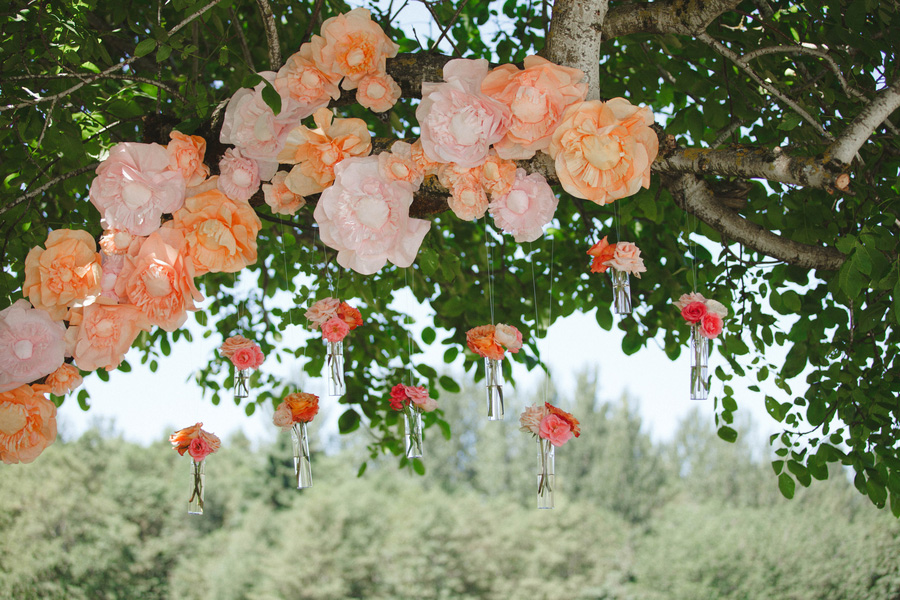 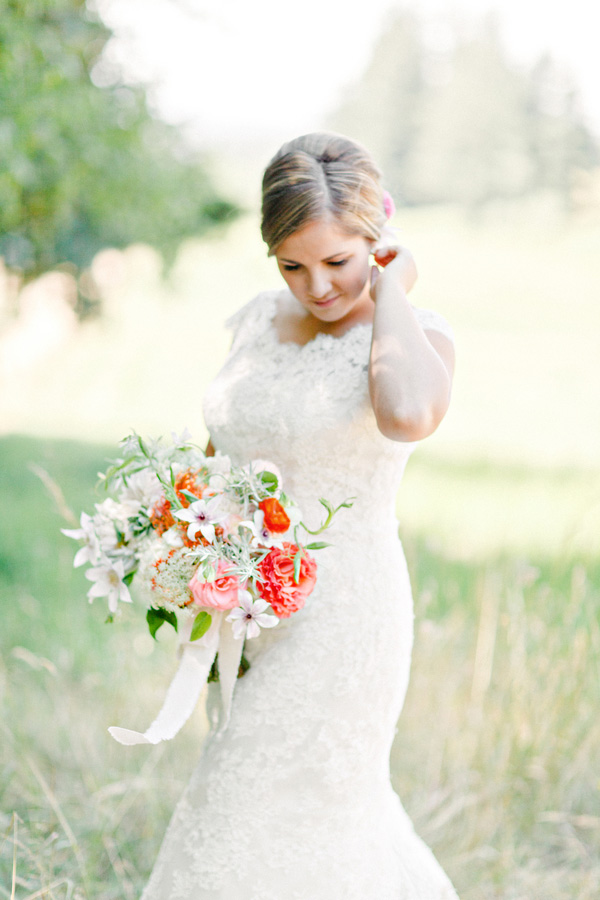 How did you choose your venue?

We choose to have the wedding at my parents’ property in Troutdale, Oregon. They live on a large property at the top of a big hill that faces the Columbia River Gorge, so it was the perfect place to have our outdoor wedding. It was also sentimental because Octavian’s parents were married at his mother’s country home, so we wanted to continue the tradition.

What was your favorite detail of the day?

I have two. First was the all the little cousins and my two baby sisters in matching dresses that my aunt made and matching head pieces made by our designer and florist. Second was pulling out the piano from the house that I learned to play on, and having a friend play jazzy music during the cocktail hour.

Our ceremony backdrop featured a large walnut tree covered in handmade paper flowers that were dyed in peach and pink tones, along with hanging blooms from a lateral branch were we sat during the ceremony. This idea evolved out of a desire to add more color to the ceremony backdrop without taking attention away from the tree. By placing the flowers in a climbing arrangement up the trunk of the tree, it drew the eyes up and over to the branch that features the hanging blooms. 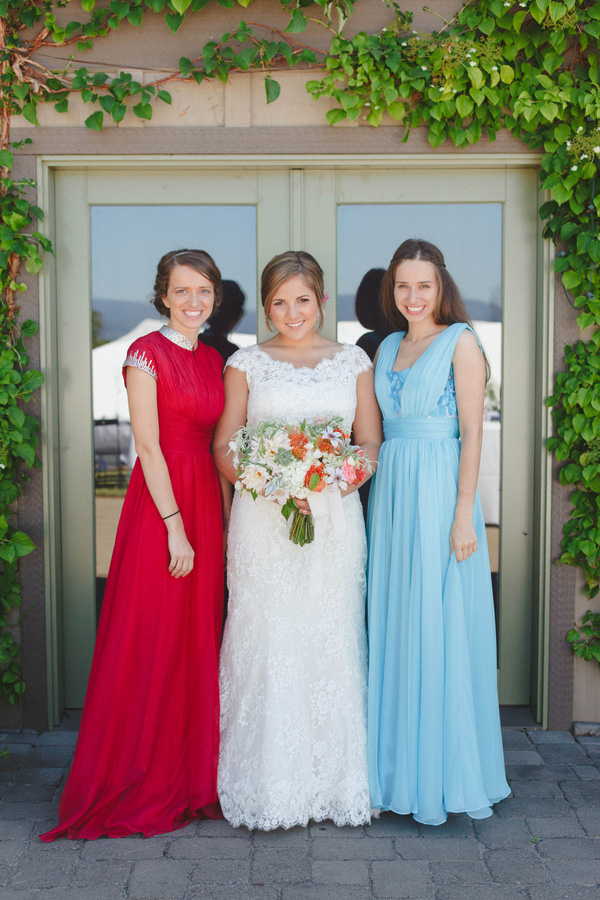 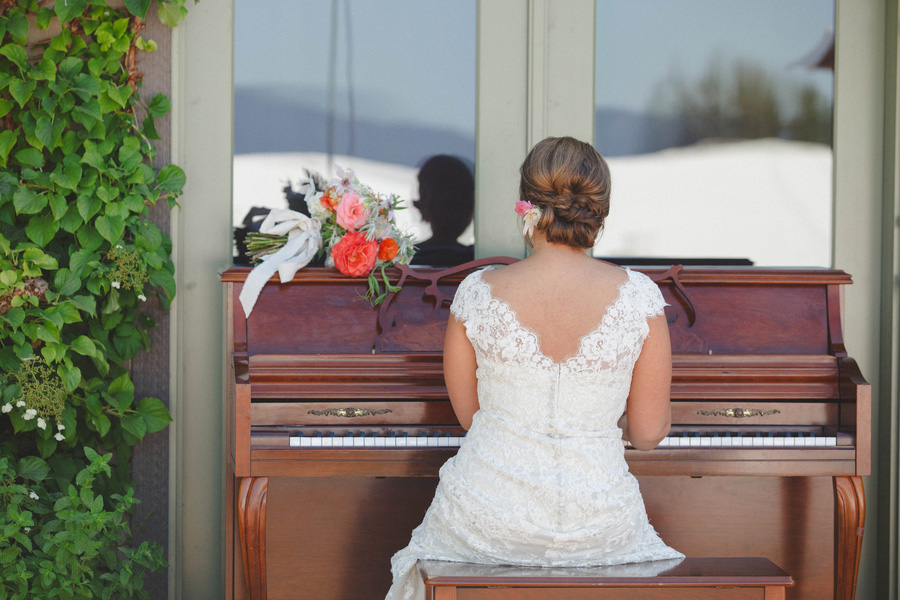 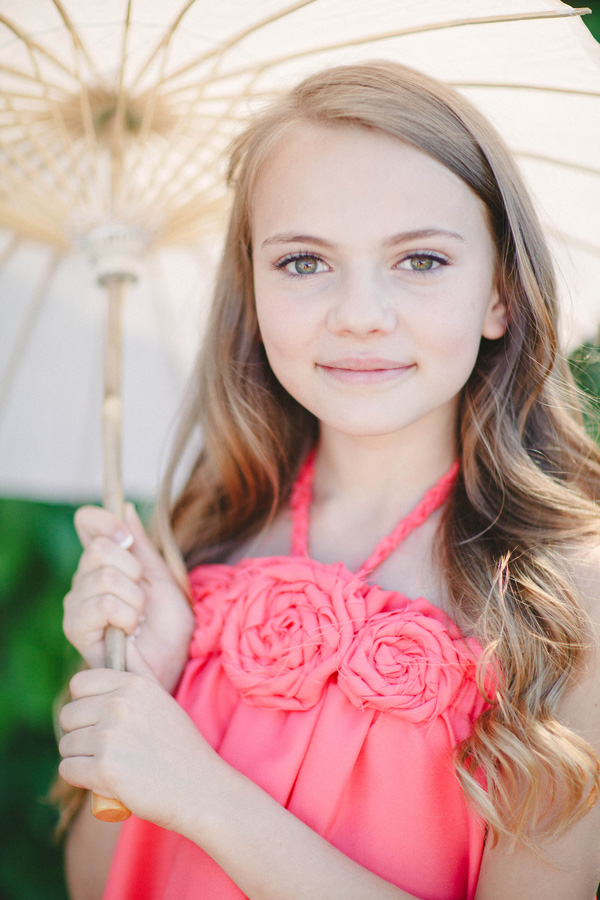 Any special traditions that help tell the story of your day?

We are Romanians. And Romanian weddings tend to become big because of our large families and many friends. We enjoy great music and even greater food, but most of all we enjoy the greatest company, our family and friends.

The few quiet moments Octavian and I had together outside before the ceremony. I sat down on the piano bench cause my feet hurt. I got bored so I decided to start playing a little jingle to make sure it was tuned. A moment later Octavian joined me on the bench. It was a sweet moment together before all the chaos of a large wedding. 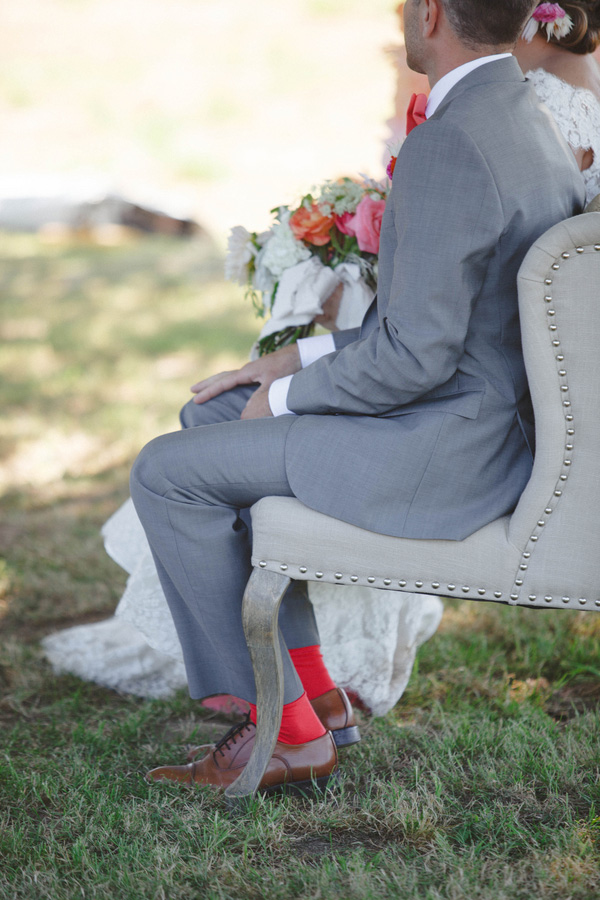 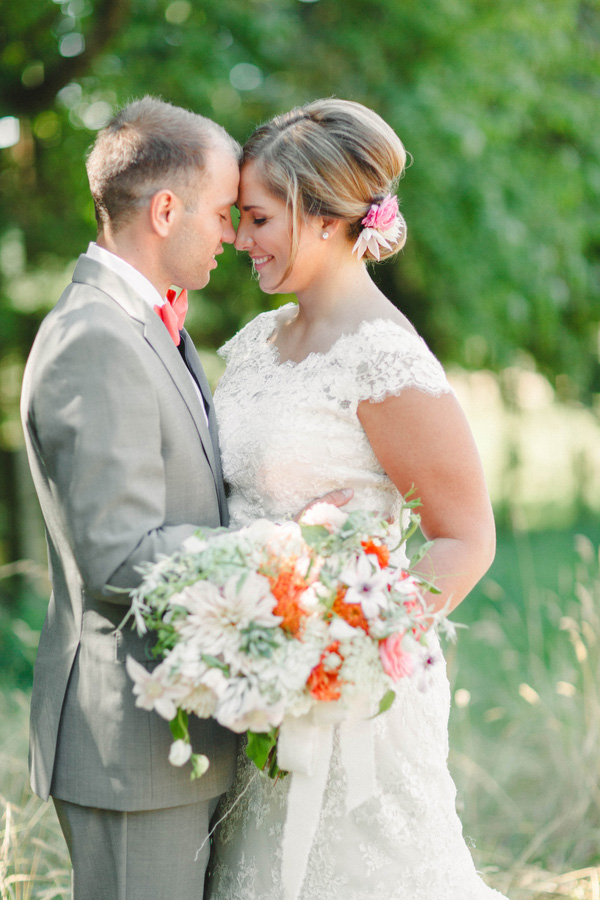 What advice would you give another couple planning their wedding?

If budget allows, hire a good full service coordinator. There’s nothing worse than staying up late the night before printing programs or cold brewing coffee. If budget does not allow a for full service coordination, at least get someone for the month, week, or day of the wedding. It will make a big difference.

Also, PLAN a few private moments together. You don’t have as much time as you think. 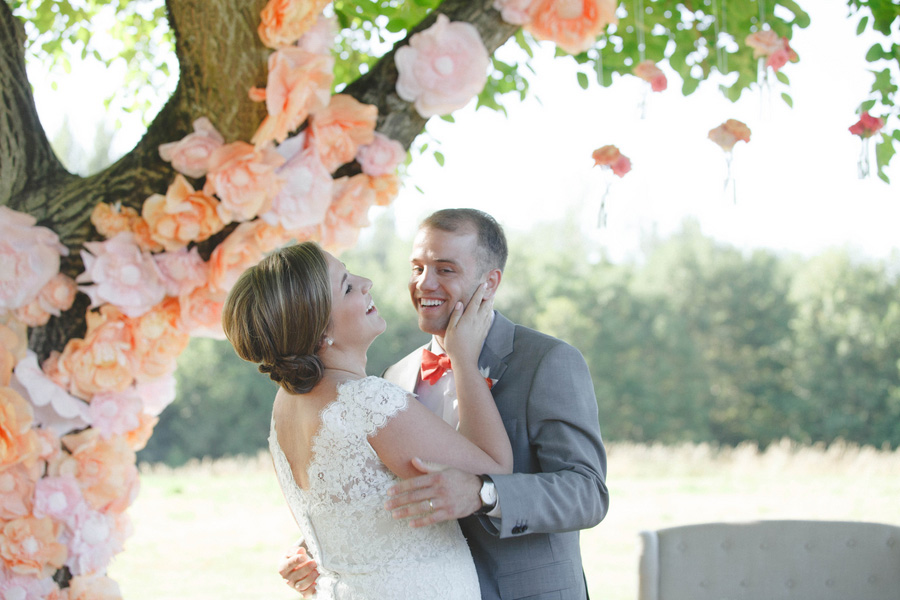 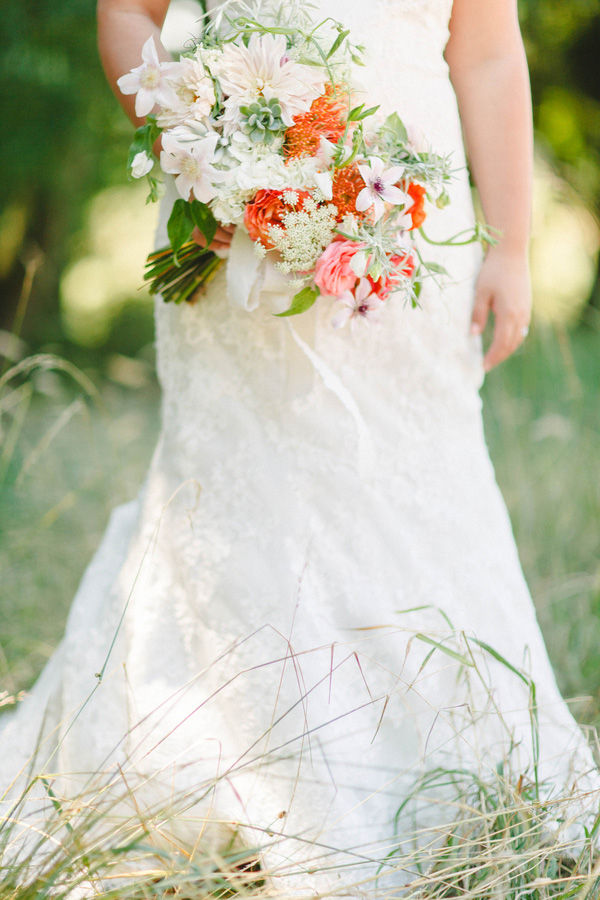 How did you two meet?

The first time we met was in a park. It was half-way around the world, in Octavian’s hometown in Romania while I was traveling for several weeks of missions and visiting family. As we became friends I discovered that he would be moving to the states later that year, so we stayed connected through social media and instant messaging. In all honesty, I was doubtful we would see each other again, but sure enough we ran into each other a couple of months later at a church youth conference. As the years passed, along with out high school years, we continued to “run into” each other, and much to my disbelief, we stayed friends–and good ones at that. Finally one summer, something changed. And the rest, as some same, is history.
Tell us about your proposal.

Octavian knew that I did not want an over-the-top-everyone-included kind of proposal. My wish was to have a private, simple moment, in a place that matched the magic of the moment. And so it was. In late August 2012, we took an impromptu trip to the beautiful Oregon Coast. While watching the sunset on my favorite beach (in Manzanita, OR) Octavian got down on one knee, told me he loved me, and asked me to be his wife. 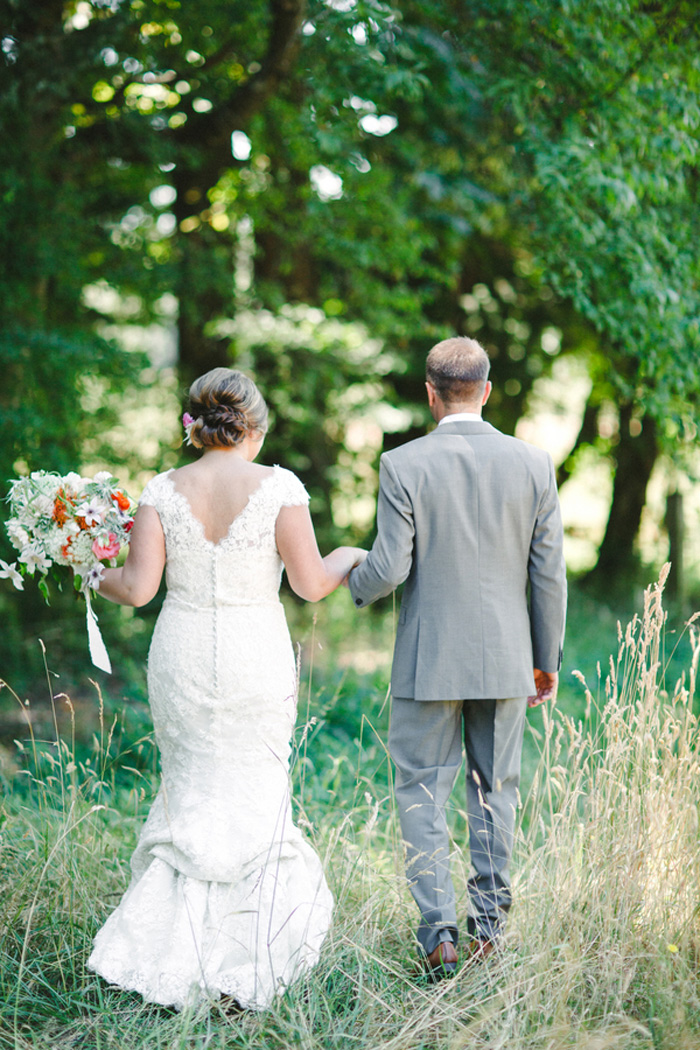