I was the captain of the dance team and Denny was the jokester voted “to never grow up” our senior year of highschool. Freshman year of college I walked in to a large lecture hall and was waved down by Denny to come sit by him. I had no idea I was taking a seat next to my future husband. From then on it was exchanging notes, study sessions, and weekend get togethers. After a year I moved to Chicago which began our 3 year, long distance relationship. We created a schedule where we planned to see each other at least once a month so we always had something to look forward to. After the first visit, I stood in my window and watched Denny disappear down my street to the airport and thought to myself “that is the man I am going to marry.” This time in our lives helped us learn more about ourselves, each other and created a stronger relationship. After 3 years Denny chose to move to Chicago where we lived together for 3 years and grew to love the city where we would eventually get married. Our home town of Kansas City was calling our name and we moved back in 2012 to be closer to family and friends. Denny popped the question on March 2, 2013 followed by a surprise party of 50 close family and friends. We’ve had our ups and downs, good times and bad, and know that these experiences will only carry us forward for the rest of our lives together.

Denny’s mother asked me three weeks prior if I would be able to attend a birthday dinner for Denny’s older sister. The day of I hurried and purchased a birthday gift and started to get ready when Denny said we were leaving an hour an half earlier than he thought to take a family picture ( can you imagine how stressed I then became). He drove me to the Liberty Memorial (which overlooks all of downtown Kansas City) where we were supposed to meet his familiy. His younger sister was there and I asked him where his family was and he said they were on their way. He asked if I wanted to take some photos while we waited which I agreed to. His sister started taking photos and then all of a sudden I turned around and he was down on one knee. I kept saying,”wait is this for real, OMG what is going on,I can’t believe this and yes I will marry you”. He opened the box and the ring was amazing which he designed by incorporating my great great grandmother’s ring. Denny explained there was no family dinner and we were going to go meet my sister and brother-in-law for a celebratory drink. I called my whole family on my way including my grandma who I couldn’t get a hold of as well as my brother. We walked in to the bar and my sister was so excited and I started to tell her the whole proposal story when she said, “hey it is really loud here lets go upstairs”. I was talking her ear off about the sequence of events when she said, “Leah, turn around.” I turned around and 50 of my closest friends and family yelled surprise. I was overwhelmed and started to cry as I made my way through the crowd to then see my 91 year old grandmother in her wheelchair crying as well. It was the most amazing, special day and night of my life. 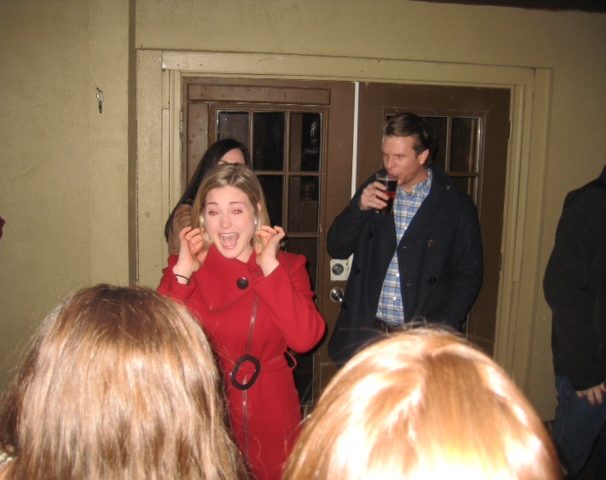 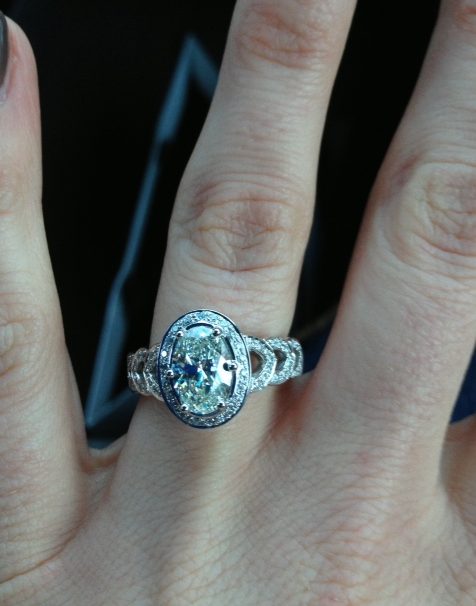