William and I met on July 4th 2010 in Avalon New Jersey at the White Briar. After being annoyed with another member of the opposite sex, a mutual friend convinced me that he had the perfect solution. “Meet your friend?- you play lacrosse for Georgetown, I know your ways!” He was adamant that “this” friend was different. After being introduced to a group of them I immediately turned around and walked away, I wasn’t in the mood and went to dance instead. Next thing I know- the long haired boy in jeans and a yellow oxford along with a backwards blue Phillies hat approaches me- does he realize its the middle of Summer? Before I could say a word he begins the conversation with “how is a girl so fine dancing in the corner by herself?” WOW! This kid has got to go! I turned around and continued dancing and to my complete and utter surprise he was still there, smiling. What a creep!
“You have a beautiful smile” Well… after 5 minutes of trying to ignore him, I finally caved. He actually made me laugh, so I decided to give him a chance. Two months later on labor day, on his second attempt to ask me to be his girlfriend, yes the first attempt failed miserably, we were “official.”

I started a company that does shopping tours in Paris with my Mom as my business partner (insert company plug here, cough CJ Tours cough), I promise this is relevant to the story. I get a call on Tuesday February 12th that I need to be at a client lunch the next day where they may take pictures for the auction I donated too, I of course thought nothing of it. The next day I got ready as usual and began the work day (I work out of my home). My Mom calls to tell me she’ll be home in 5 and my assistant begins gathering her stuff and tells my Mom we will meet her outside. I went upstairs to touch up my make up as well as lipstick when my assistant suddenly opens the door to tell me to hurry up- hmm I guess we are in a rush? I finish getting ready and as I am walking downstairs she’s standing in the hallway telling me to go out the front door, normally we go out the side door, but again thought nothing of it. I open the door, walk outside and notice Karl, William’s brother holding a video camera… umm did I miss something? My Mom then screams Happy Valentine’s Day- well thanks Mom you too? Finally I notice my neighbors as well as the construction workers from across the street all lined up in my driveway with cameras… what in the world! Then I see it… William is wearing a Knights costume standing alongside a LIVE horse… now I am really confused! Is this some sort of Valentine’s day joke? But it’s the 13th…. He walks up the front walk with the horse, kneels down, and asks “Will you marry me?” HOLY COW THIS IS SERIOUS! I am shaking… but I don’t see a ring? He hands me the flowers and there it is… “wait, you are serious!” Great, now I can’t get the box open… after what I am sure seemed to him like 3 hours passed I finally got the ring open. William turns to the camera to “happily” report that we still don’t have a confirmed yes… suddenly a little voice popped out of me saying “YES.” Mission accomplished! As if the day wasn’t great enough, we made it onto the news- thanks to William’s brother- what a day! 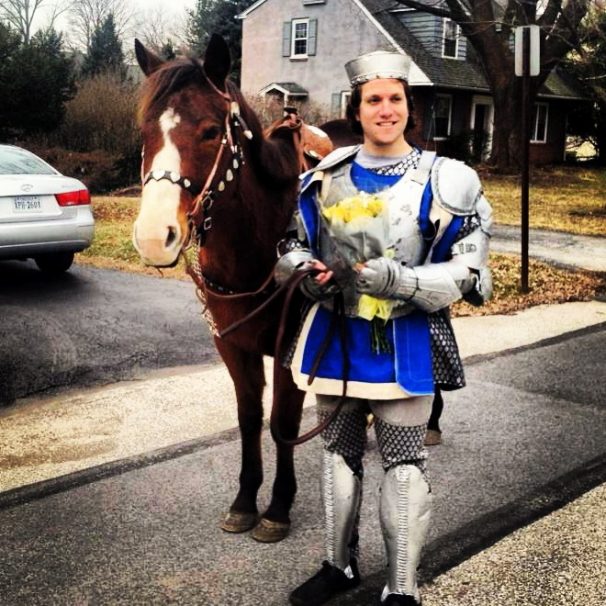 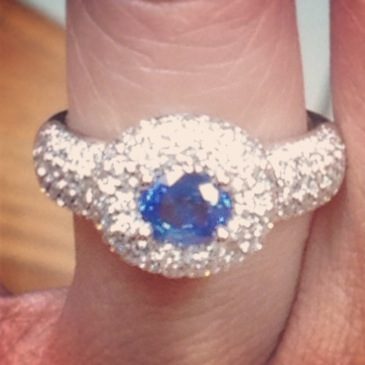