We’ve got a really special treat today! First off, a lovely lovely lovely wedding shot by photographer Katy Gray that took place on Lake Superior. Second, the bride has shared some of the great DIY details and ideas from her beautiful wedding that I know you are going to love! My favorite idea was the use of Craspidia (billy balls) that don’t require much water and were therefore an easy flower to use for their centerpieces! Let’s enjoy all this sunshine to help kick off our week! 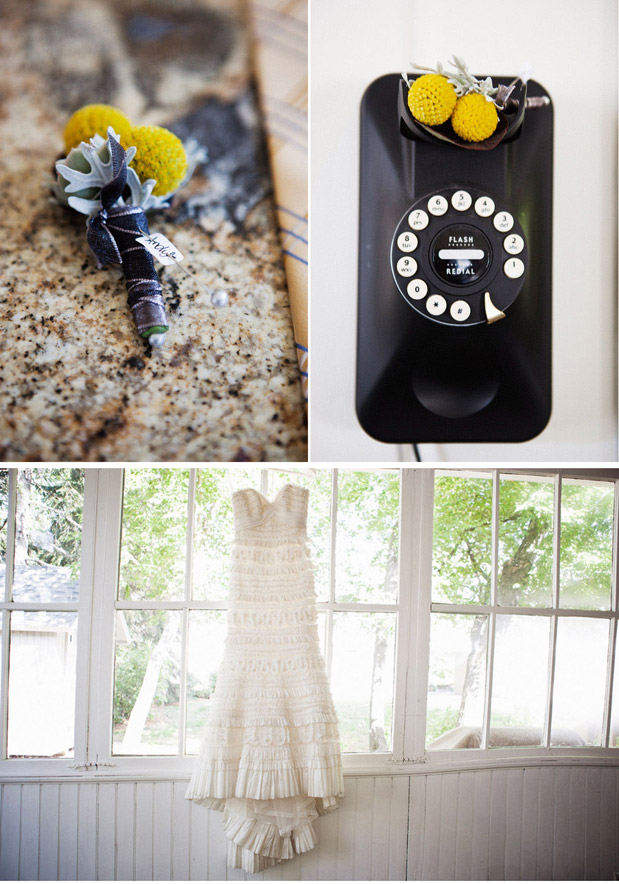 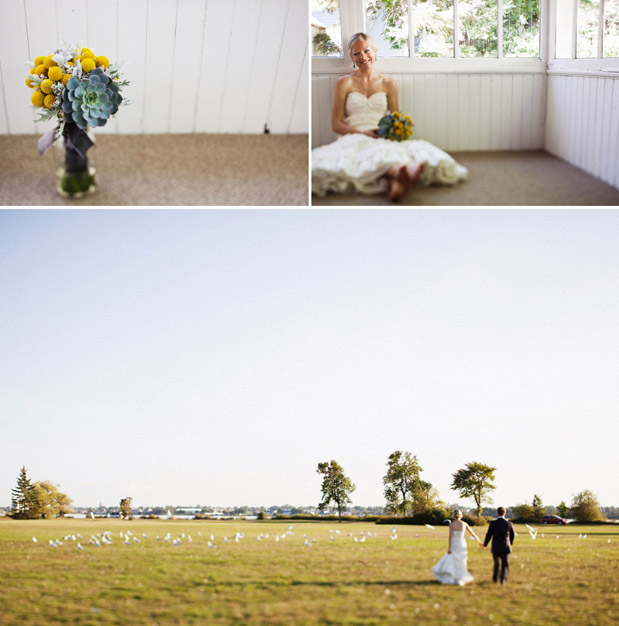 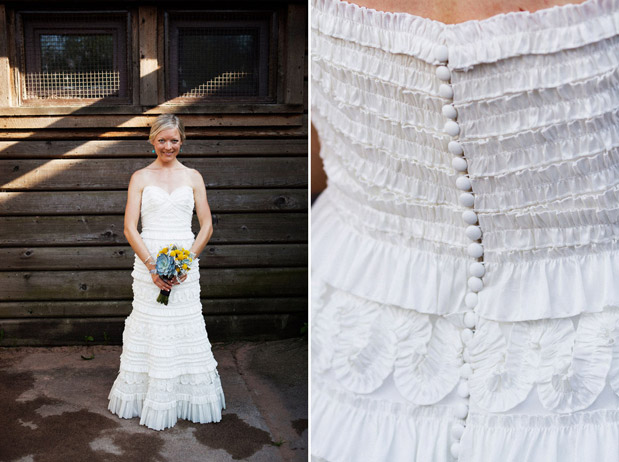 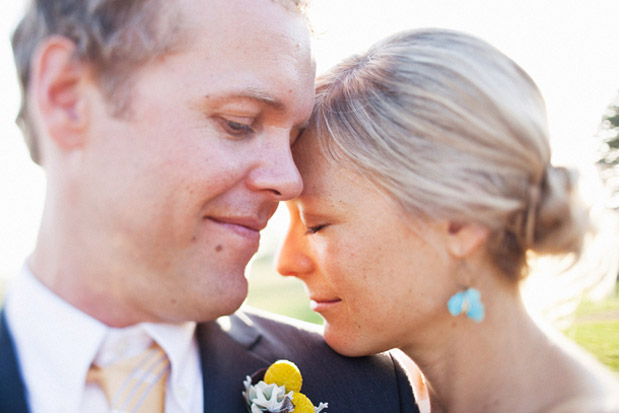 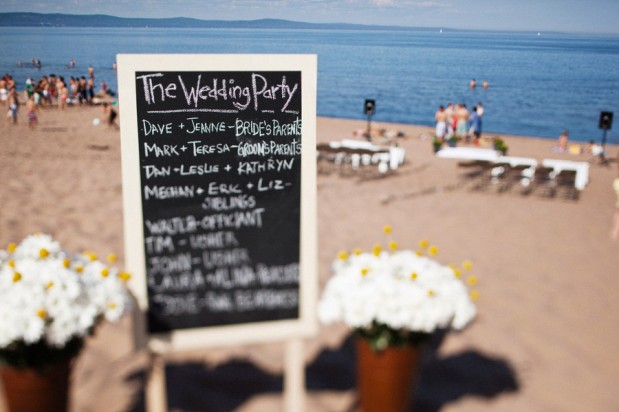 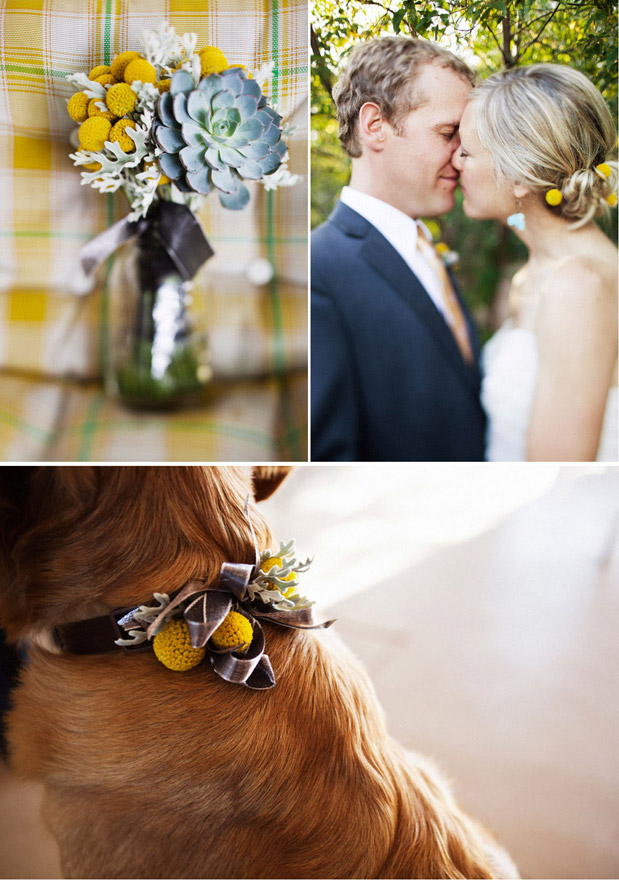 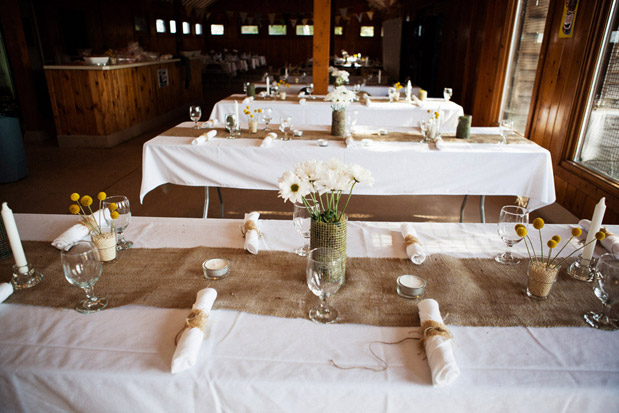 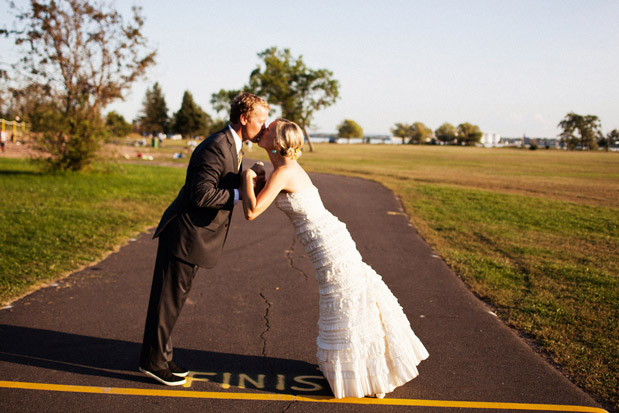 From the bride, Sharon:

We knew we wanted to get married right on Lake Superior – it’s really our ocean and it’s stunning! We played with a couple of locations but found that the “Park Point Beach House”, a large public building, would be just the right size to hold our crowd, plus we could choose and bring in our own food and drink. Park Point is approximately 7 miles long of sandy beach and the Beach House is at the 6th mile in the park area.

We had a lot of help from our families on the decorations. My parents made all of our chalkboard from plywood and chalkboard paint. Andy then built the stands they set in. My parents and sister also helped with our table decorations. We spent a day (and my parents more) twisting wire mesh to be circular then we stuffed them with dried moss. We made over 130 vases, costing us just under $30. Our other vases were drinking vases from Ikea. We put white navy beans, rice, and couscous in them so our yellow craspedia (billy balls) flowers stood nicely within them. Craspedia flowers dry great on their own so they didn’t need any water…plus now I’m using them for some house decorations. We also had white daisies and sunflowers throughout, two different sized Ikea candles, and our table runners were burlap, which we plan to reuse in upcoming garden project. Last, Andy’s mom made the “flags” from our old clothes and she even used material from HER bridesmaid dresses.

It turned out to be a BEAUTIFUL day. Almost 80 degrees, no wind, and no clouds. Folks here call these days a “Perfect Duluth Day” and it was! There are a number of universities in Duluth and the beach was PACKED. We had to ask some sunbathers to move over from the ceremony, just a bit. It was pretty fun – after the ceremony not only did we have cheers from our crowd, we had cheers from the beach crowd all around us!

We did a lot of the flowers ourselves; ordering them wholesale online. A friend who works at a local shop arranged our bouquets and boutonnieres (our dog Josie’s too) and I think she did an incredible job. Along with our families, we had quite the crew helping out that day – two friends headed up all the decorating and many more helped.

For food we had a local restaurant, Lake Avenue Cafe, that focuses local and organic foods cater. I used to work for the owner as a server MANY years ago, so it was wonderful to work with them. Another local restaurant called the Northern Waters Smokehaus did our appetizers of fresh fish, cheese, and crackers. For dessert… My mom’s cookies are pretty famous among my friends. Throughout college and when I lived in Jackson Hole she always sent care packages, so they became a quick favorite…so they just HAD to be part of the dessert. We also had a local cupcaker make chocolate, red velvet, and vanilla batter and then we 6 different frostings, including toasted coconut, mint buttercream, lavender, and raspberry ganash. We had peanuts out (folks were encouraged to just throw the shells on the ground – was ok by the cleaning crew) and my mom made a great pretzel snack mix. Those were out throughout the night.

Also – Andy used to be a brewer at a local brewpub and he got to actually BREW our beer! It’s his own recipe he gets occasionally asked to guest brew…so we called it Wedding Ale. Was delicious! We had two friends bartending that night.

The aisle was just driftwood that Andy and I had gathered. We had a 5:00 wedding and most of the wedding party was barefoot, including me. So much easier to walk! We set out some chairs and benches but mostly people stood. Andy’s dad played our processional song – a song he had written himself. Our close friend Walt was our officiant and we picked carefully every word of our ceremony. We chose Walt Whitman’s “A Road Less Traveled” as one of our readings as both Andy and I met years ago in college, went our own ways (me, Jackson Hole, him Antarctica) and after a mutual friend played cupid, I ultimately did move back to the Midwest to be with him. Our 1-year-old golden retriever Josie was our ringbearer and after she “delivered” the rings she went swimming – during the ceremony! I was so focused on the ceremony I had no idea that happened until I saw pictures the next day. How funny! One of our ushers ended up following her around, keepin’ her in line.

We had a band of two play our recessional song (“A Million Years” by Alexander) and throughout appetizer time – they were wonderfully light and fun. We left the schedule loose and had a dinner buffet open from 6:30 – 8 so folks could be free to chat (lots of friend reunions going on!). It actually really helped us too to have a free schedule as we did have some pictures to talk after the ceremony…plus, we both just wanted to be free to talk and meander with folks without worrying about the clock. We did have speeches roughly set at 7:30 and my extended family, who is very musically inclined, surprised us by having the group sing a song about Lake Superior as my cousins played violin. As the night was so beautiful, it turned to be perfect timing for the sun to be setting and the almost-full moon to be rising. My parents and uncle played our first dance (“Wonderful the Way I Feel” by My Morning Jacket) and then we had “The Dad’s” play! Andy’s dad on acoustic and singing and my dad on bass – they were fantastic!! Finally, a 4-piece band called “Too Many Banjos” finished up the night with incredible bluegrass music.

I got my wedding dress at a place called The Wedding Shoppe in St Paul. It’s a San Patrick dress, Camerun style. It was actually the very first dress I tried on – my sister and sister-in-law picked it out – and coincidentally the size fit great so I bought it off the rack and saved a lot. I loved wearing it! It was so fun. I had billy balls in my hair and my turquoise earrings were borrowed from a friend.

My advice would be for a couple to take whatever moments they can throughout the night to stop, look around, and soak in how wonderful and touching it is to be able to gather family and friends, to be all together at once.