Allison and Christian’s love for old world glitz and southern charm is apparent in every detail of their stunning Charleston nuptials designed by A Charleston Bride. Allison stunned in a crystal-encrusted and tulle Jenny Packham while the groom in his classic black tux was flanked by groomsmen in white dinner jackets and bow ties. Vows were said in a classic church ceremony at Grace Episcopal Church, followed by a reception kicked off with a cocktail hour in the garden of the Govenor Thomas Bennett House. Overhead string lights and a beautiful bar with a jazz ensemble captured the New Orleans flair of the groom’s heritage. Palmetto Bloom created romantic florals in soft white, and added impact with graphic rust palms set against luxe pink velvet accents throughout the lounge area. And, lucky for us, it’s all captured beautifully in these images by Virgil Buano. 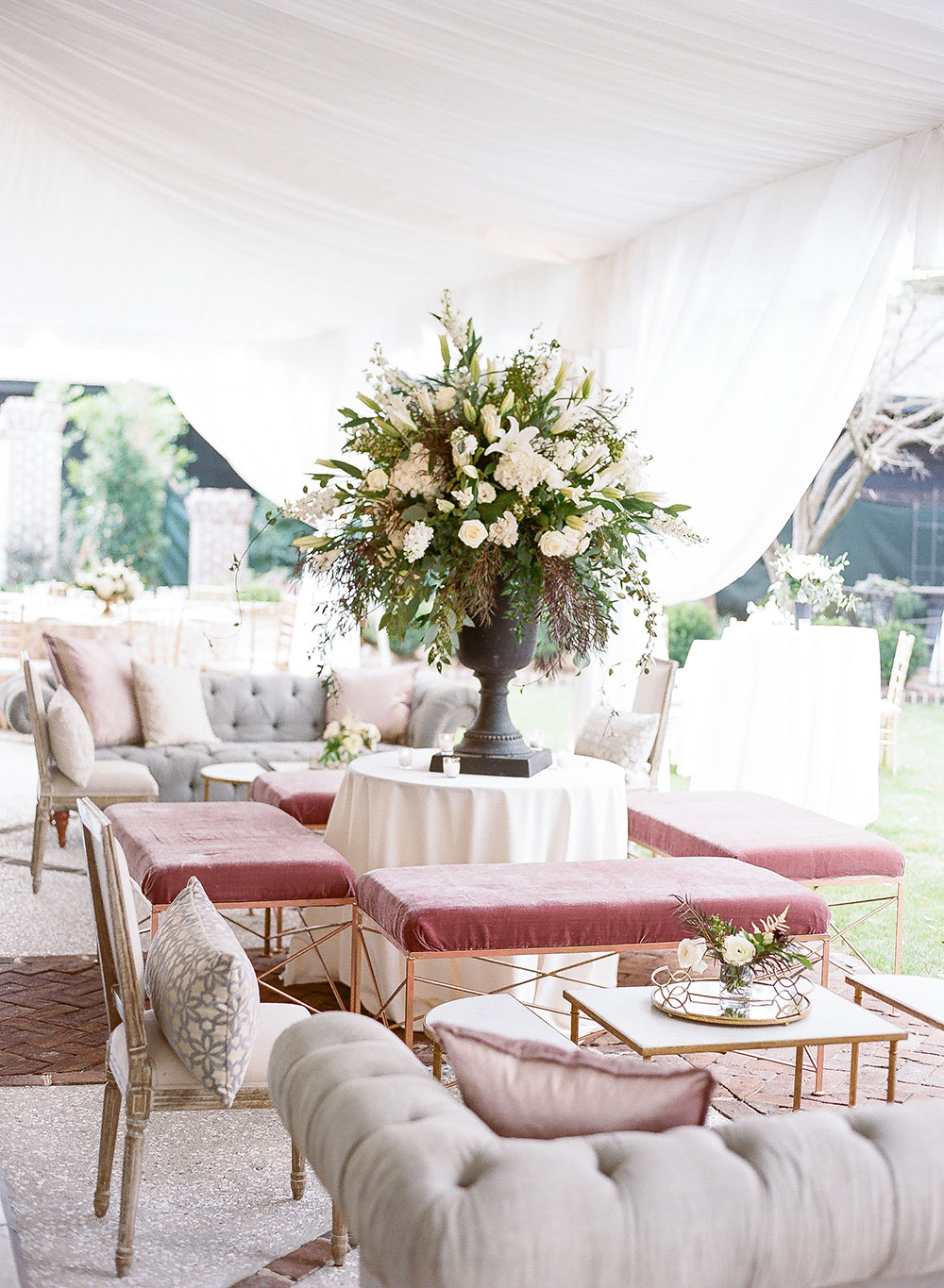 The groom, Christian J. Leveque, is known as the master of surprises and always has tricks up his sleeve. From giving his bride-to-be, Allison, a pile of Legos she had to build into the Empire State Building before being whisked away for a birthday in NYC, to a surprise engagement in New Orleans where each candid moment was captured by a hidden photographer, to the unveiling of his surprise honeymoon plans to the Maldives and Dubai, this groom never disappoints. 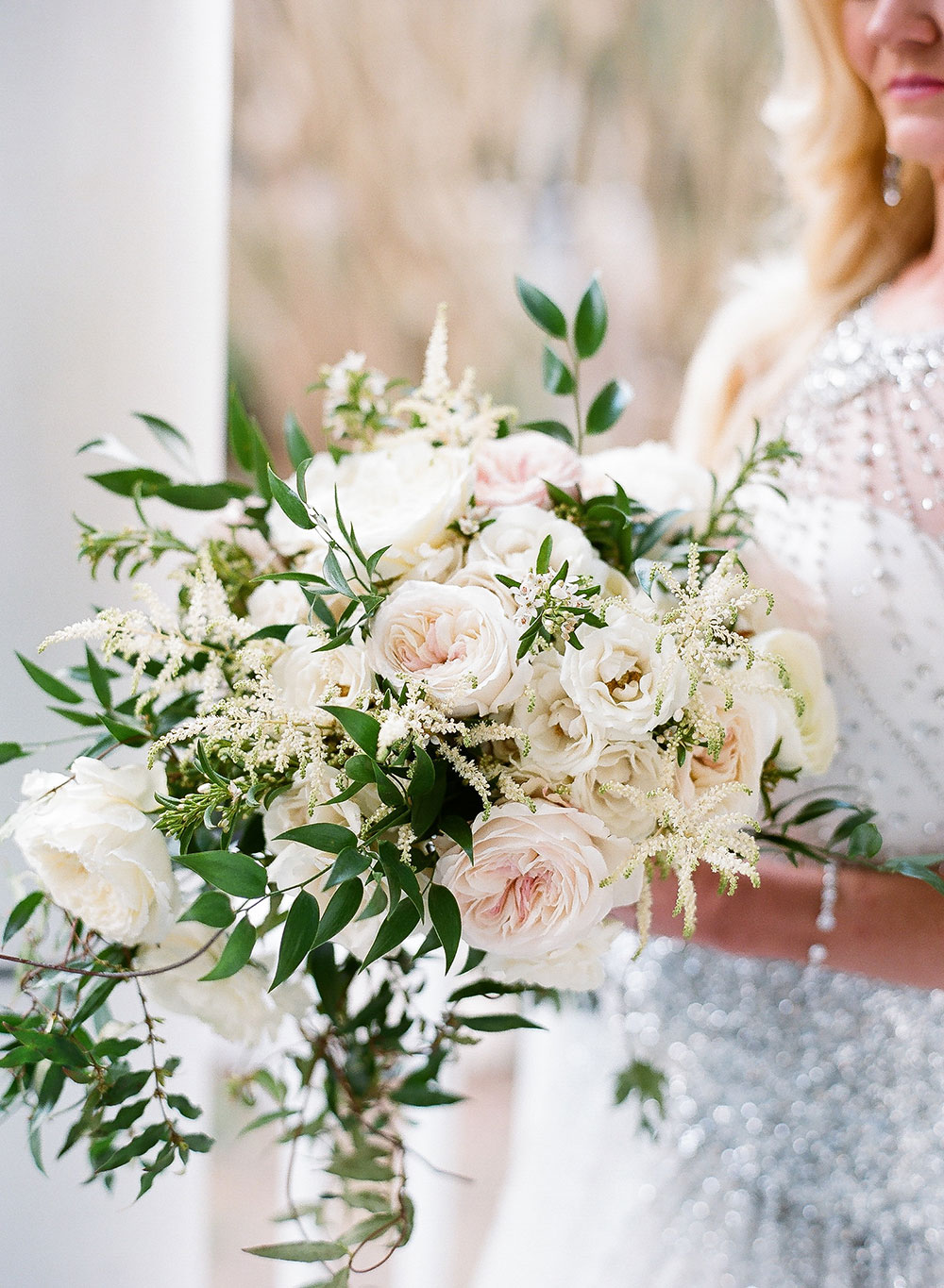 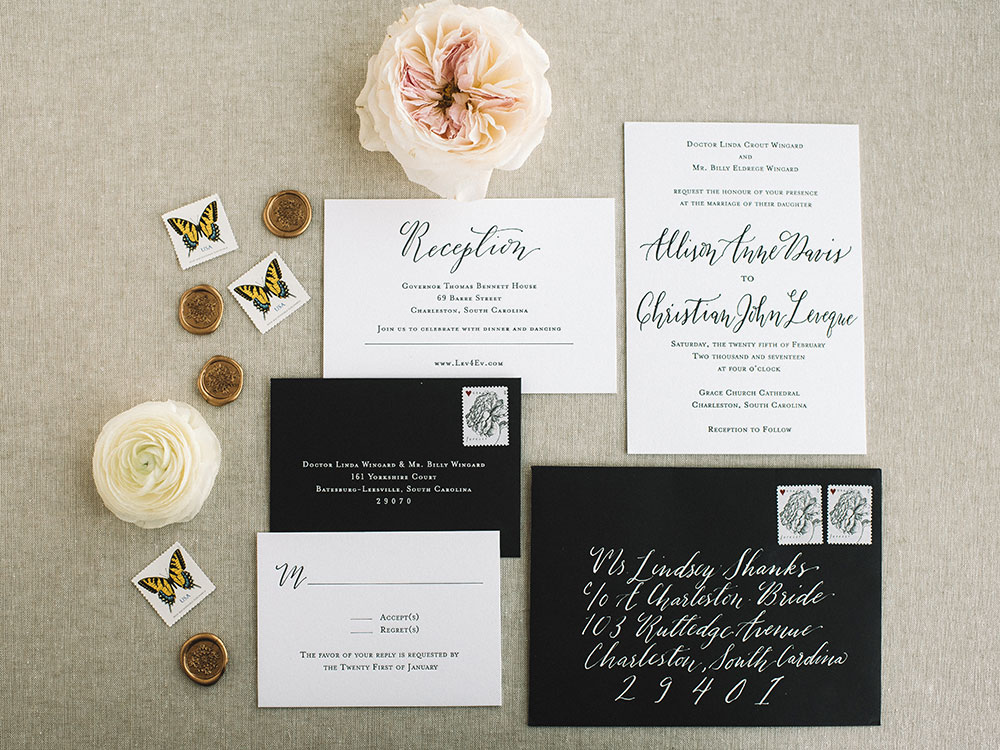 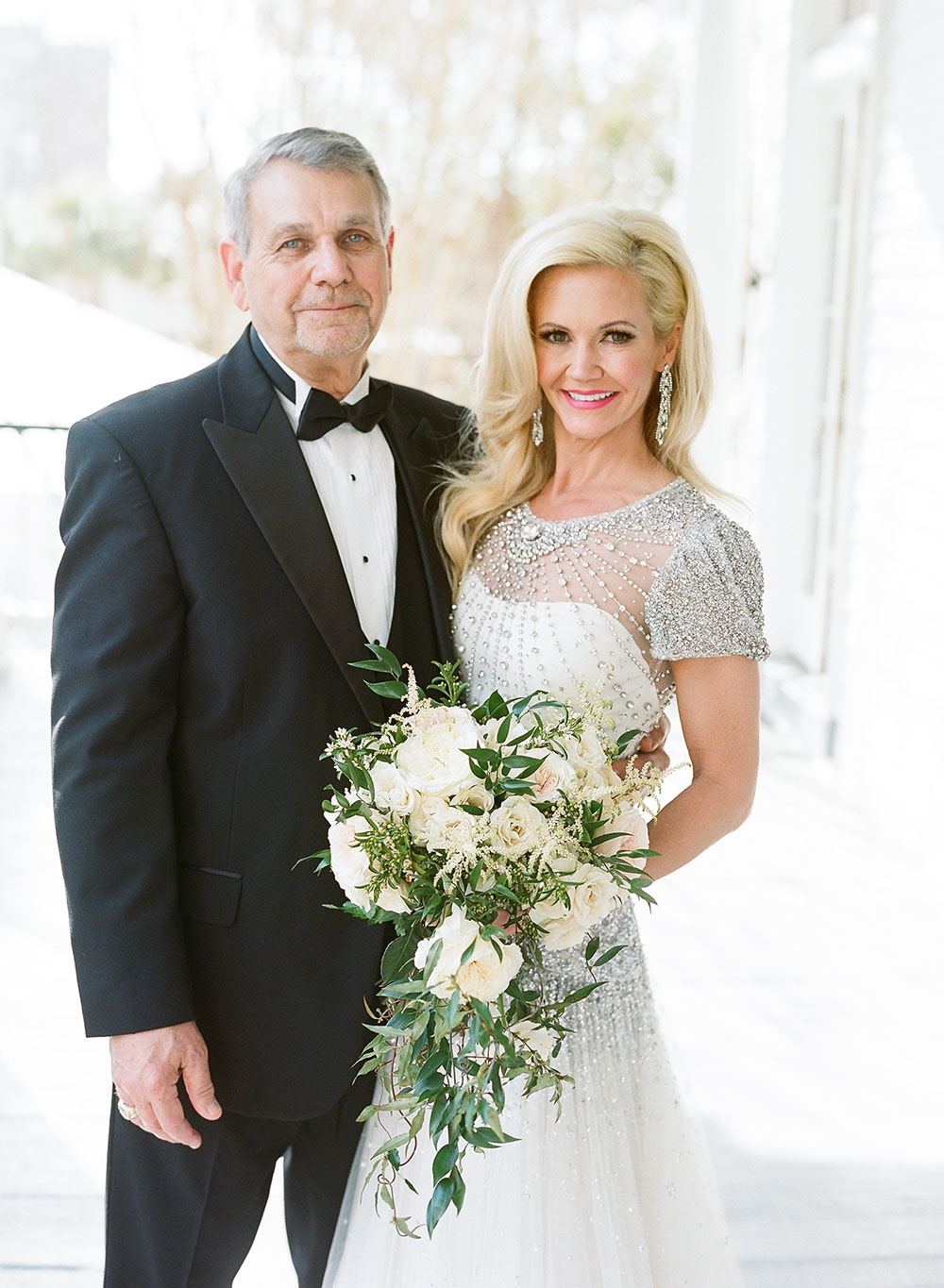 Christian and Allison tied the knot on February 25, 2017 in Charleston, South Carolina. The joyous occasion started with a 4:00 pm ceremony at Grace Church Cathedral followed by a cocktail hour and reception at the Governor Thomas Bennett House. The night was capped off with an after party at The McKee’s. Lindsey Boyce of A Charleston Bride planned every detail of this amazing day to perfection. Virgil Bunao put his signature touch on the photography at the wedding, as well as an engagement shoot in downtown Charleston and bridal portraits at Lowndes Grove. Adam Siegel captured the event in motion, providing flawless video production. Betsy Weir of Lemontree Calligraphy & Illustration, a watercolor studio based in Melbourne, Australia, designed an original crest displaying the bride and groom’s heritage that was used throughout their wedding season, including save the dates and a gobo projection on the dance floor during the reception. Jonie LaRosee of Palmetto Bloom went above and beyond with her creative floral designs and bouquets for the special occasion. 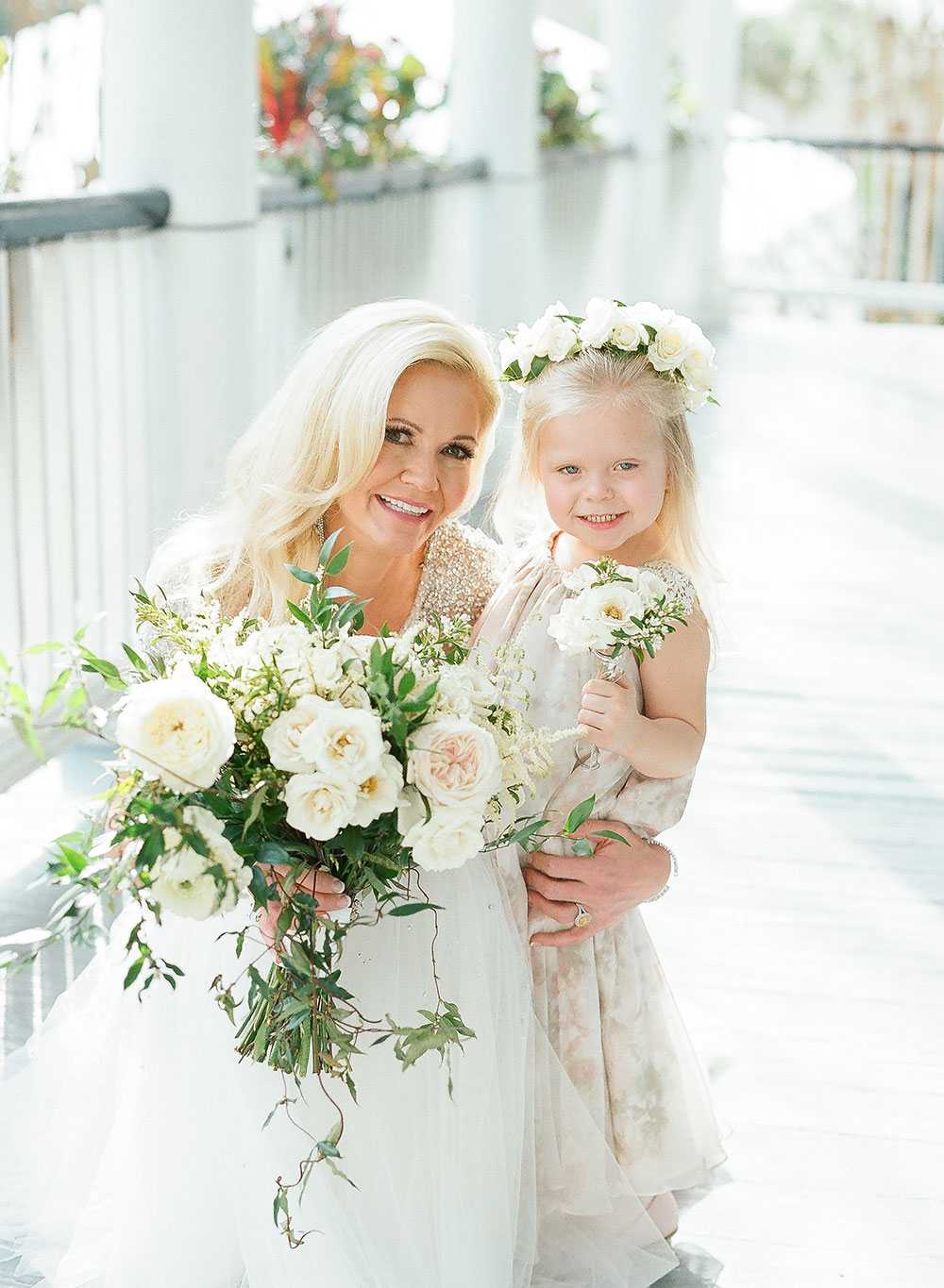 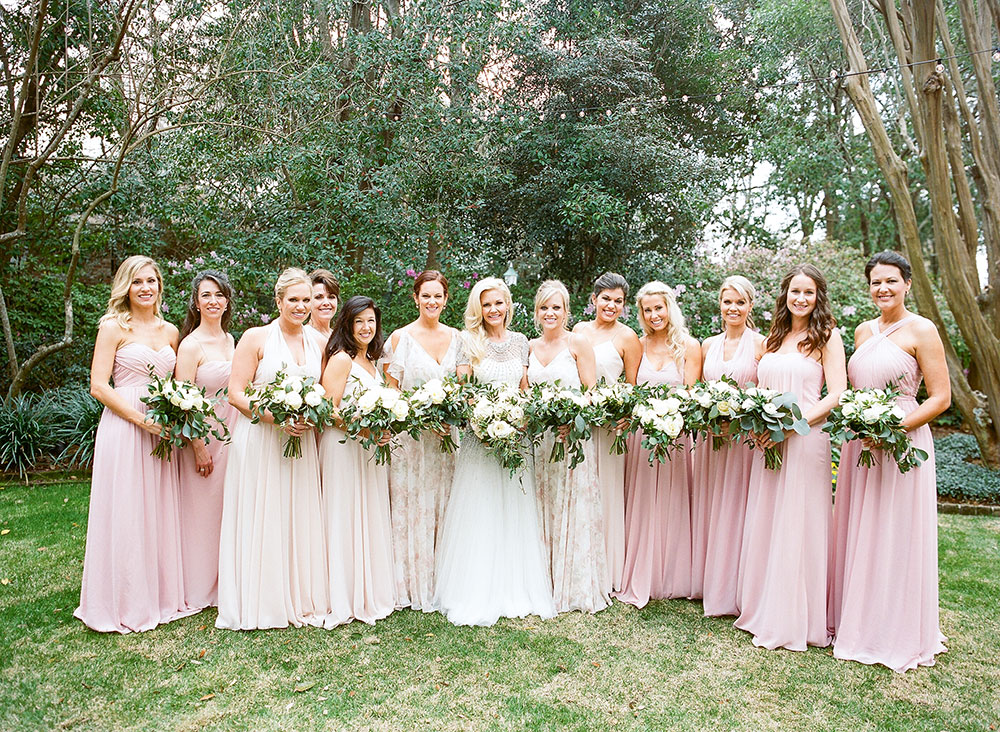 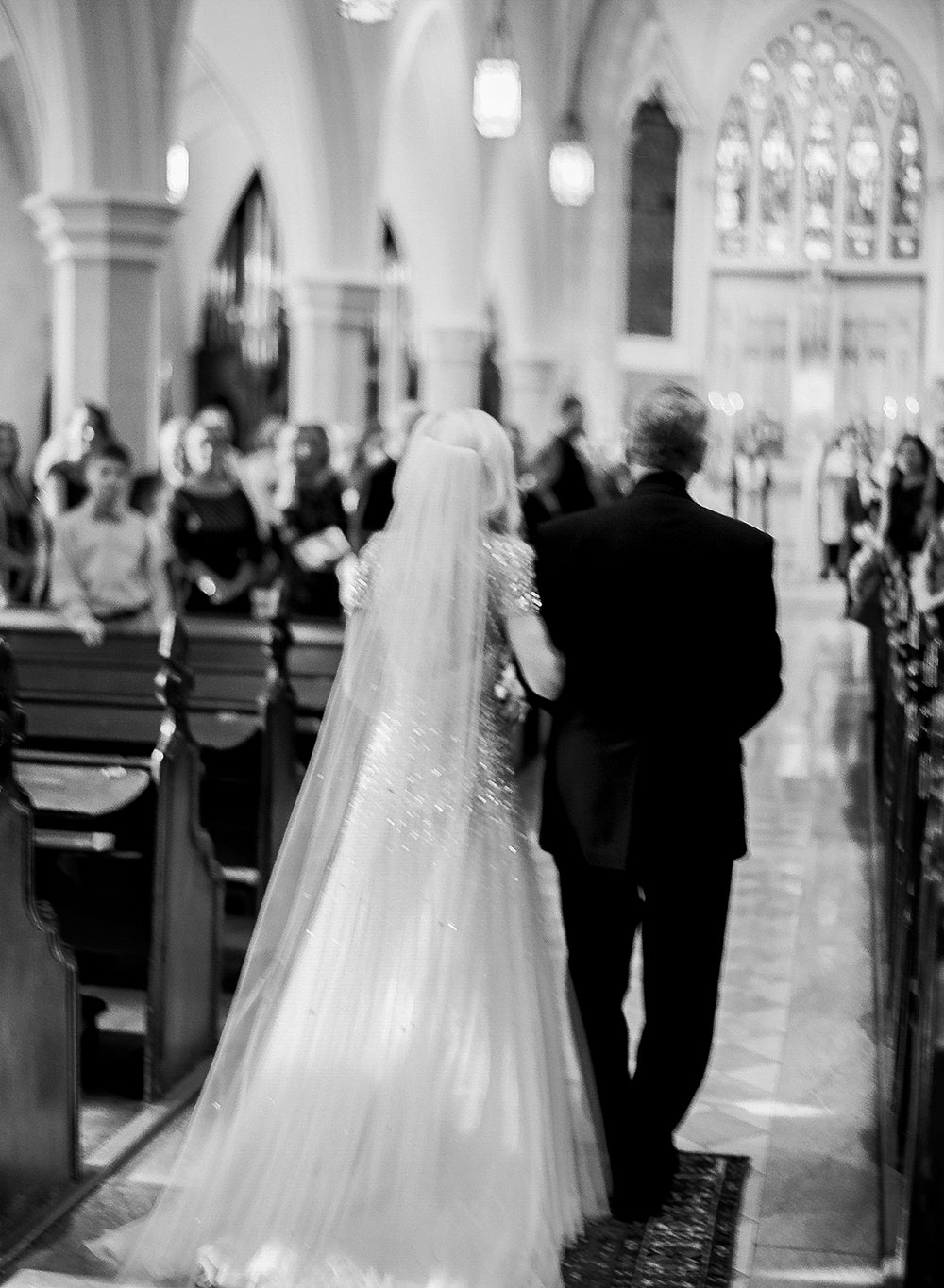 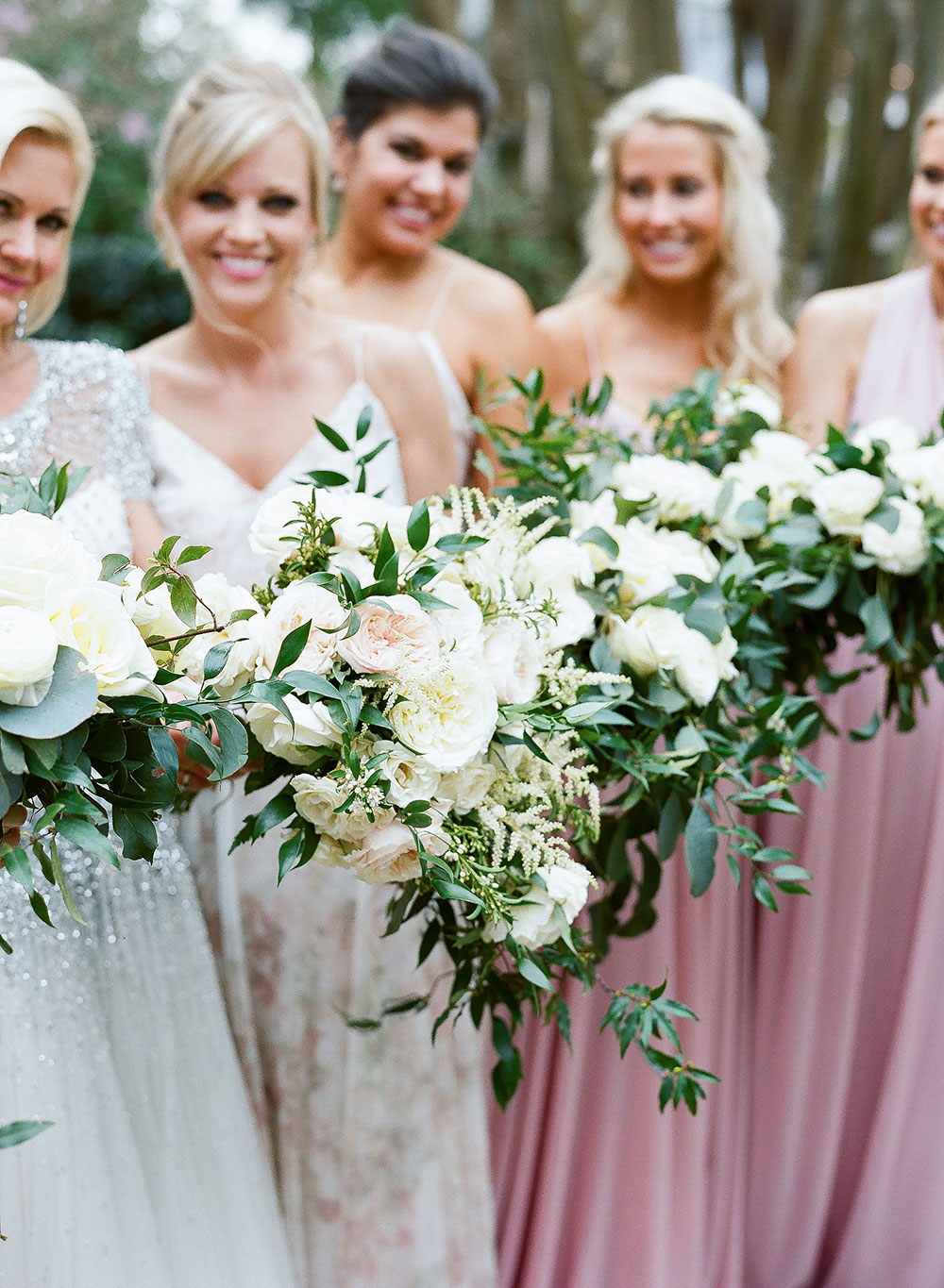 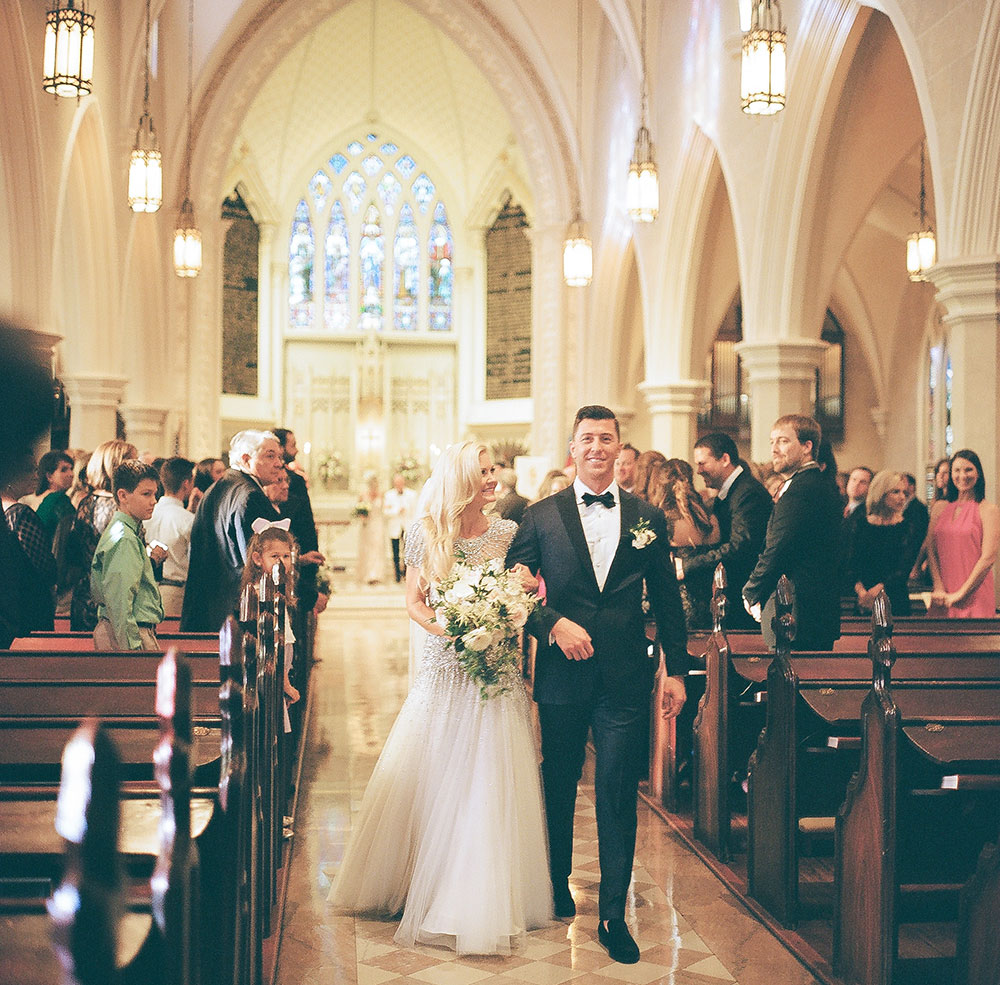 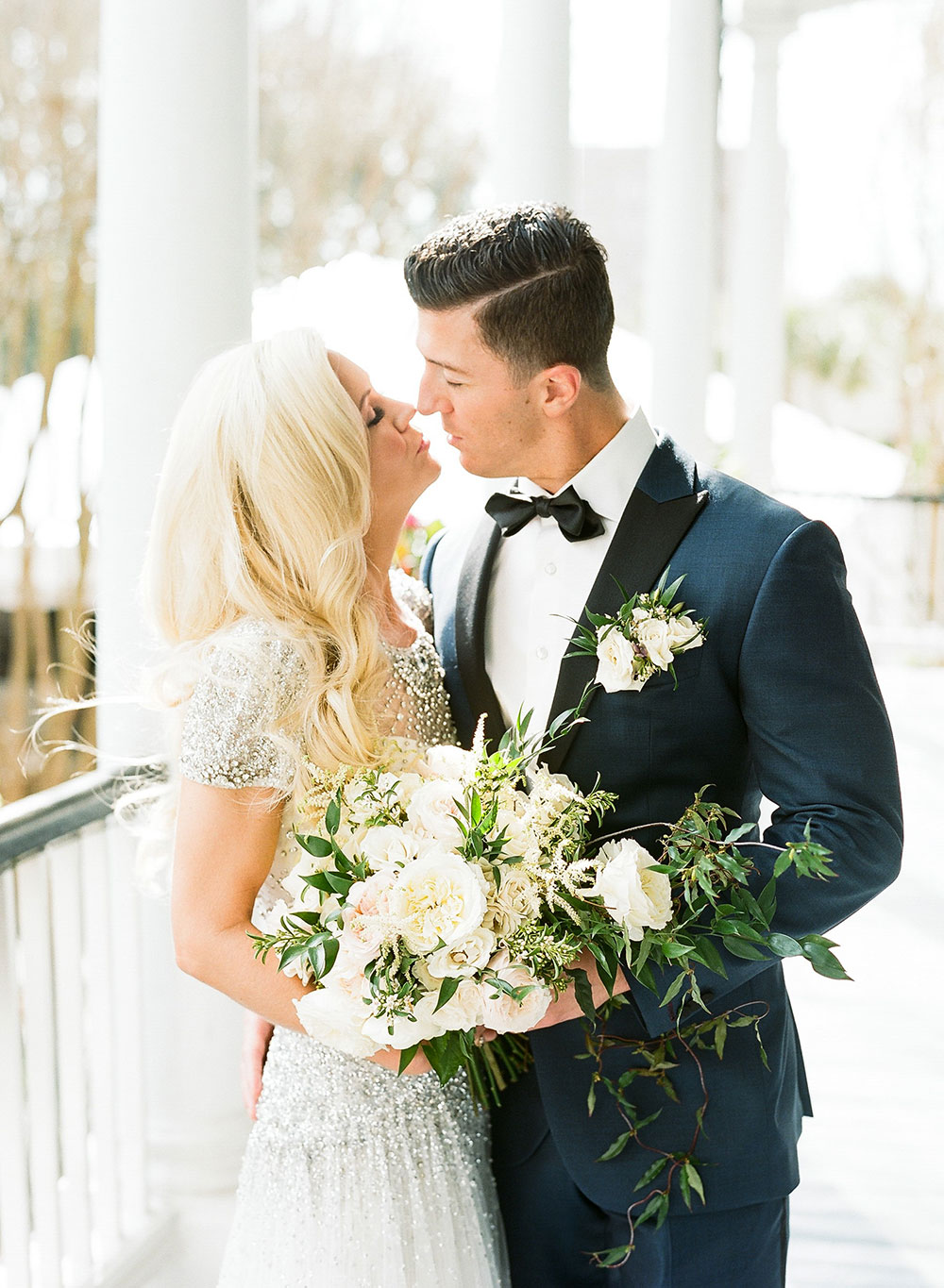 The bride chose two different looks for her big day, both of which were from White on Daniel Island. Allison’s first dress – designed by Jenny Packham and known as the Dixie – was vintage inspired and embellished with heavy crystals. For the reception Allison changed into a two-piece couture gown designed by Jodi Moylan, owner and designer at White. The talented Madison Hughes was the make-up artist and stylist that dolled up the entire wedding party. For Allison’s first look, Madison styled her hair down in soft elegant, romantic curls – then for the reception Madison created a beautiful up-do so she could dance the night away. The mother of the bride wore a blush Romona Keveza gown she discovered while wedding dress shopping with Allison in New York City from the bridal boutique Panache with the help of Elise Rosenblum.

Christian’s 13 leading men wore ivory dinner jackets from Berlin’s paired with midnight blue tuxedo pants and Ralph Lauren pocket squares, highlighting the groom’s love of southern staples with a contemporary twist. The groom wore a custom midnight blue tuxedo from Klein Epstein & Parker of Los Angeles, California. Christian chose to mark the occasion with a quote from Winston Churchill embroidered inside his jacket that was revealed to his bride during their first look, as well as a final touch of their wedding hashtag #Lev4ev under the jacket collar. 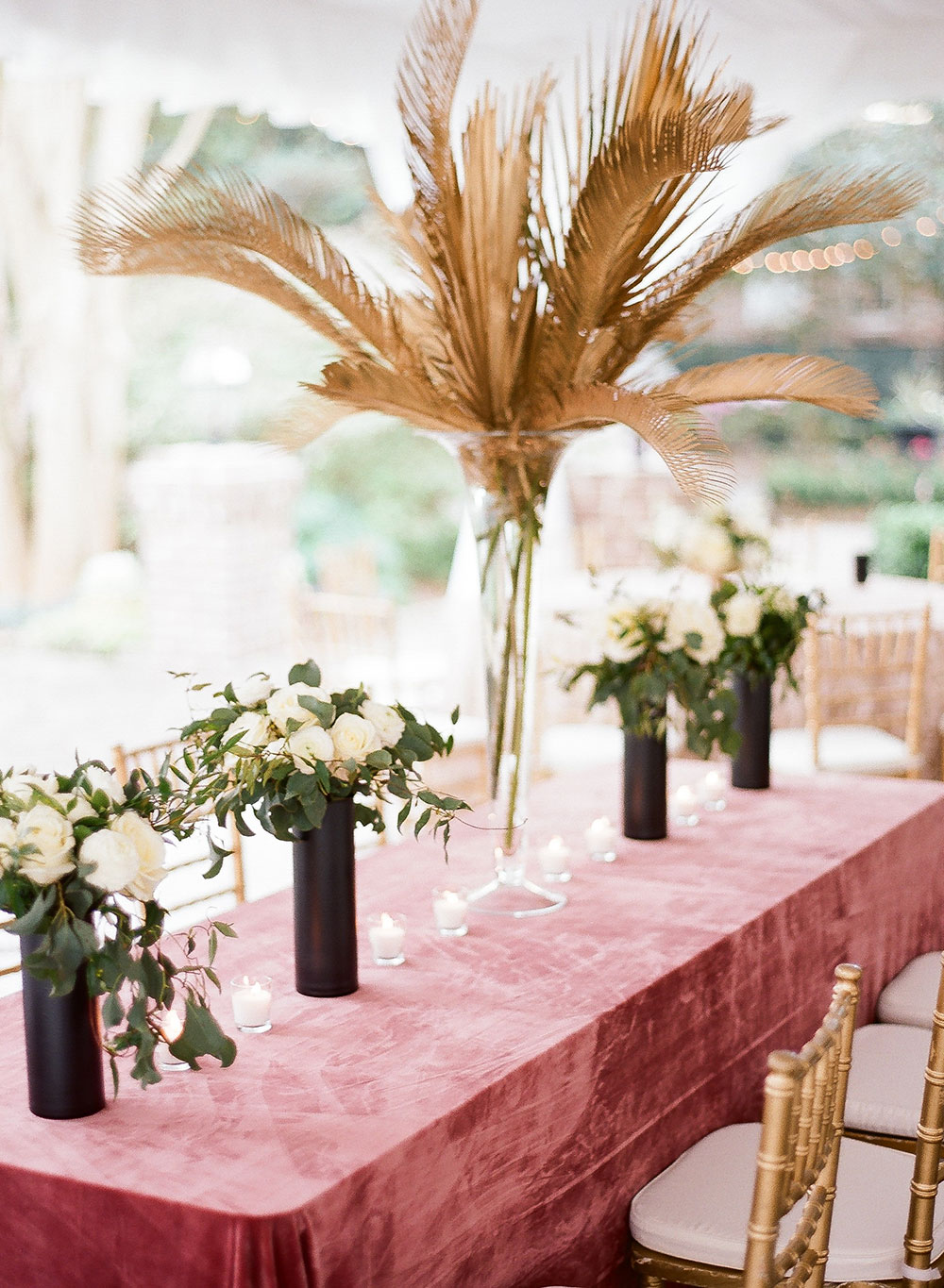 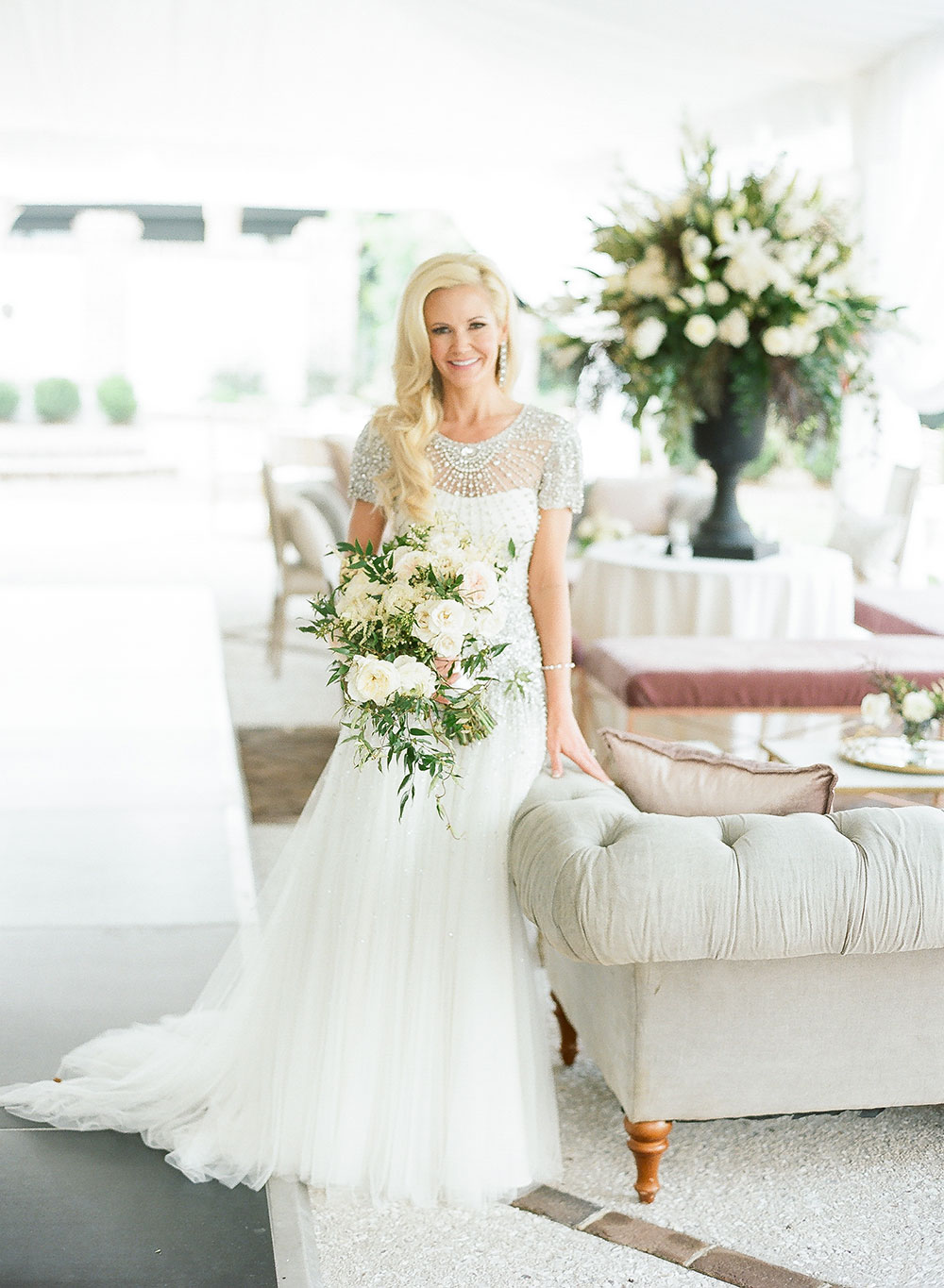 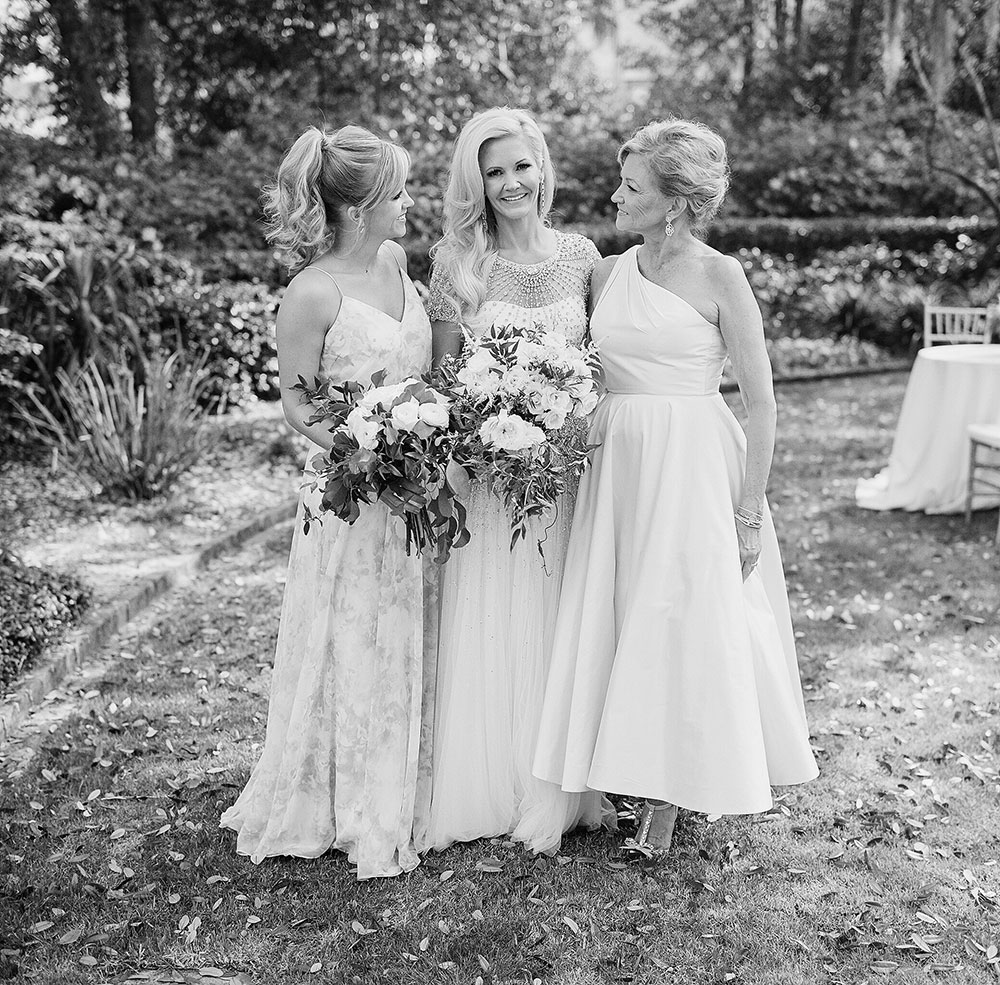 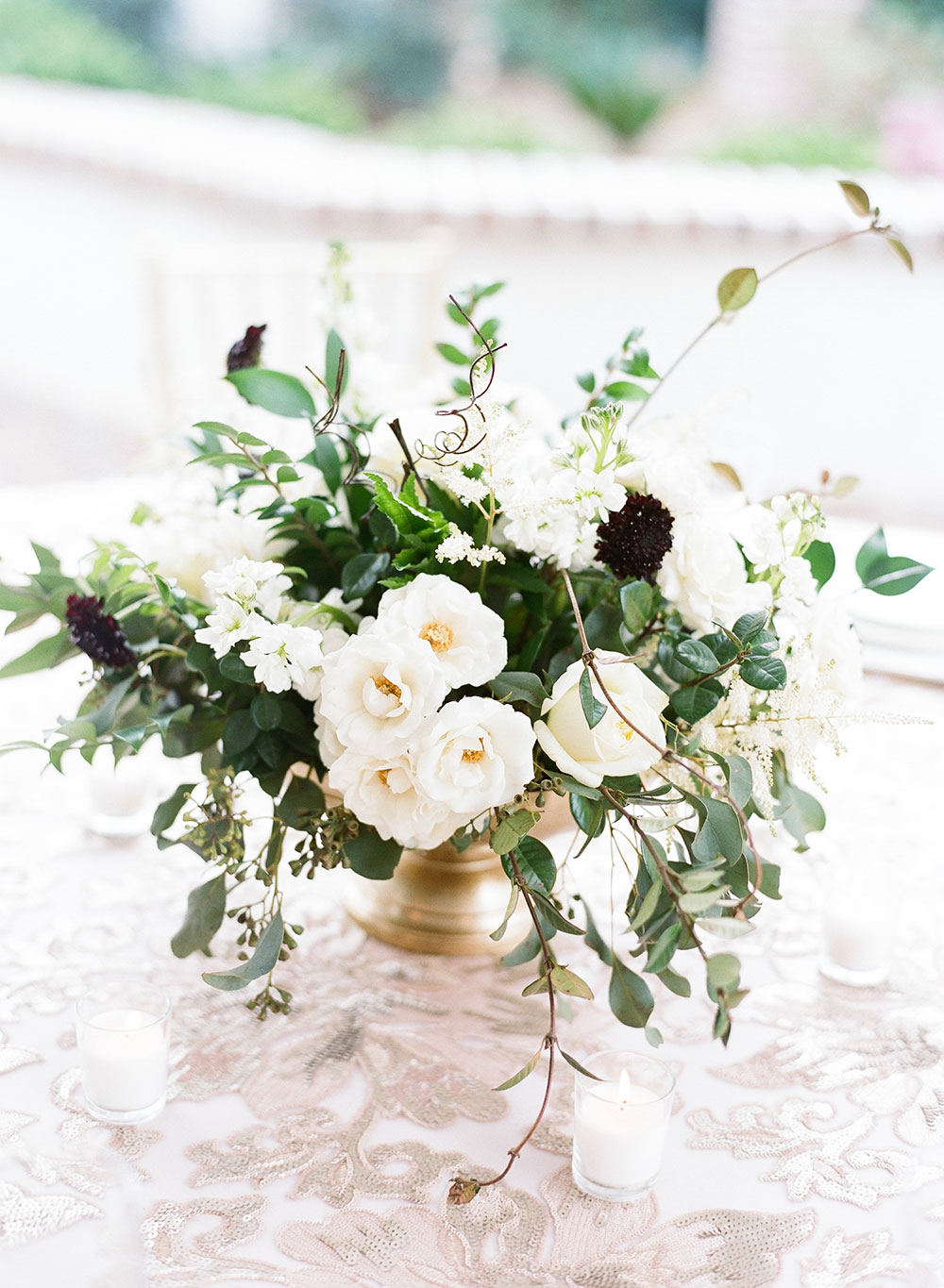 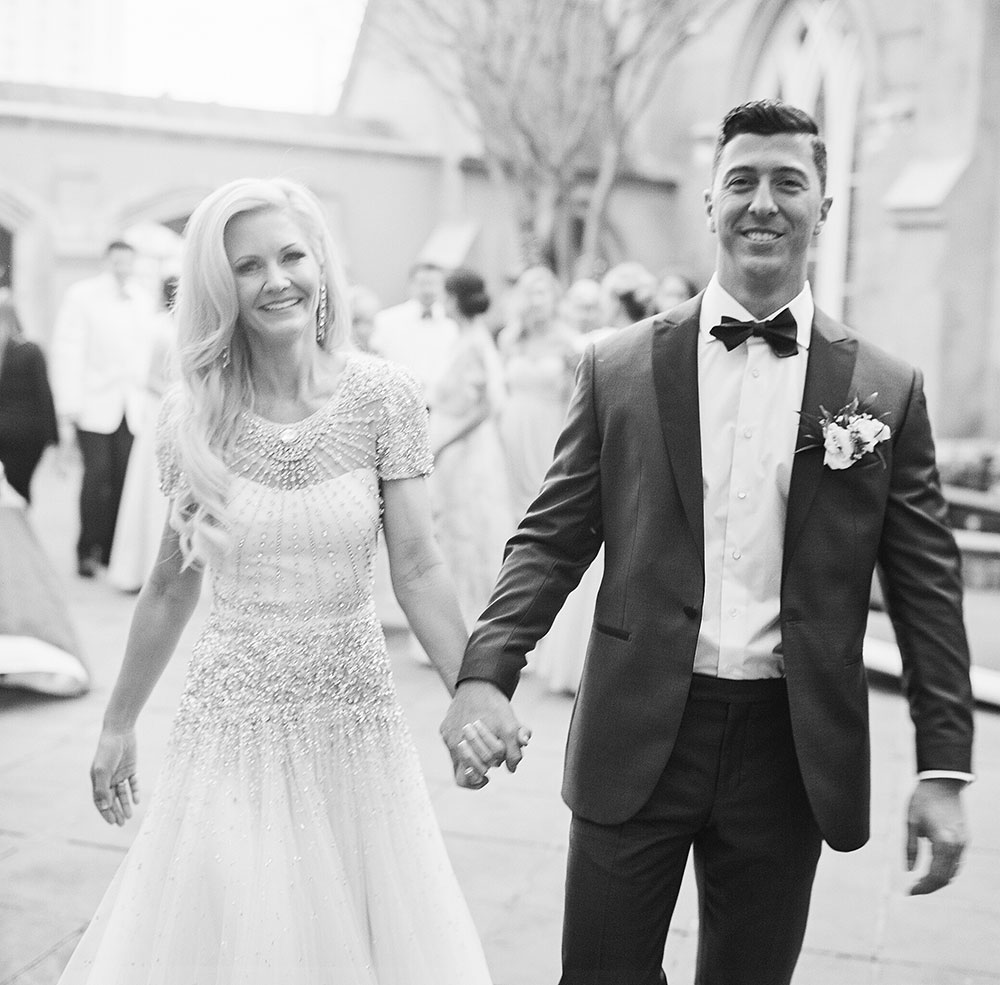 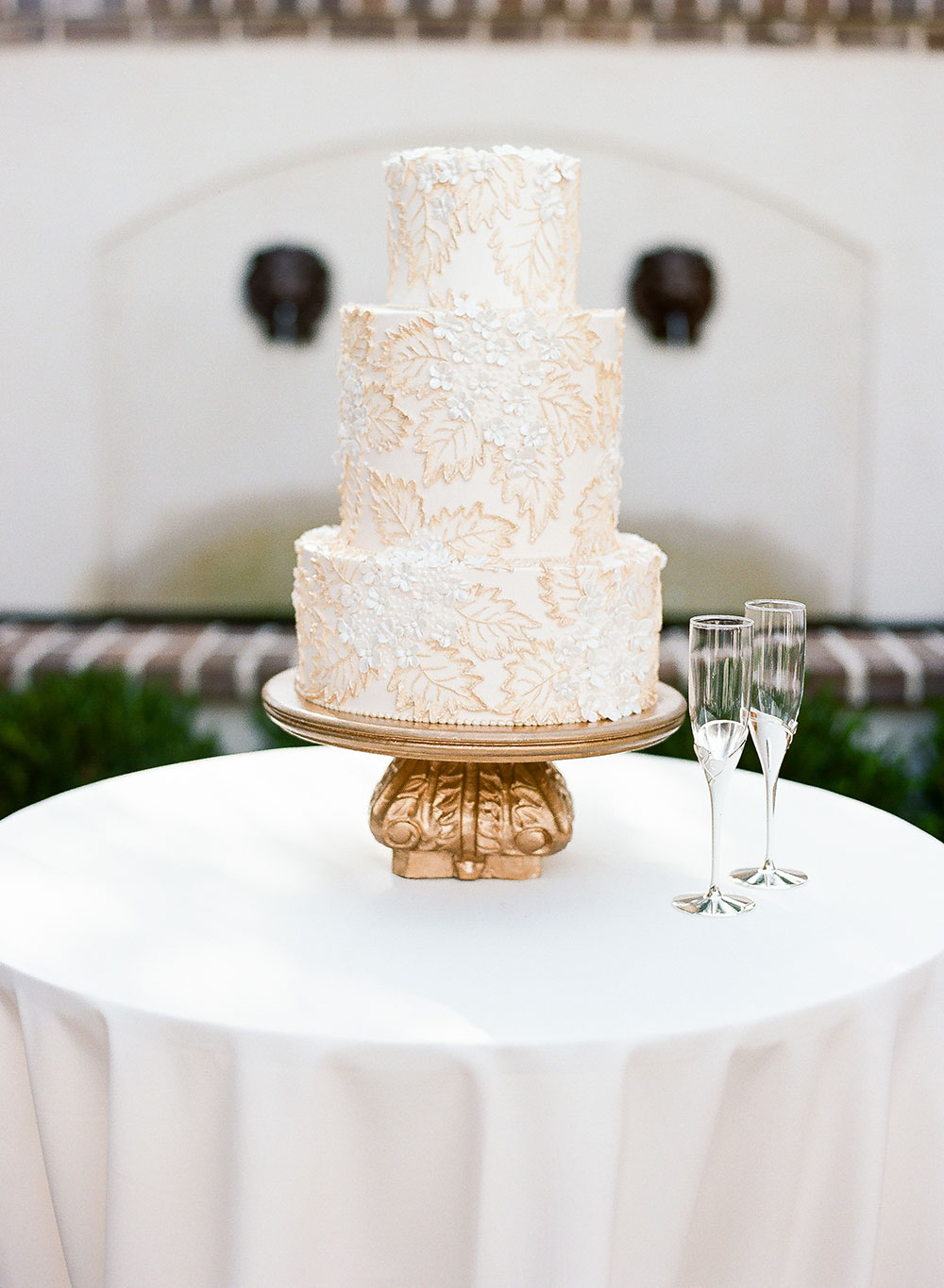 The reception kicked off with a cocktail hour in the garden of the Thomas Bennett House. Overhead string lights and a beautiful bar with a jazz ensemble captured the New Orleans flare of the groom’s heritage. The couple’s love for old world glitz and southern charm was evident from their choreographed first dance that started with a classical tune and ended with the South Carolina state dance. Cru Catering outdid themselves with delicious southern dishes displaying both Louisiana and South Carolina Lowcountry cuisines. Guests indulged in these tasty entrees served in the secret garden during the reception. The wedding cake was designed by Jim Smeal, who drew inspiration from a floral dress design and crafted the perfect cake to represent the couple’s big day. The 8-piece Atlanta band, Mo’ Sol, brought the party to life as they performed an electric mix of Motown classics and modern hits. 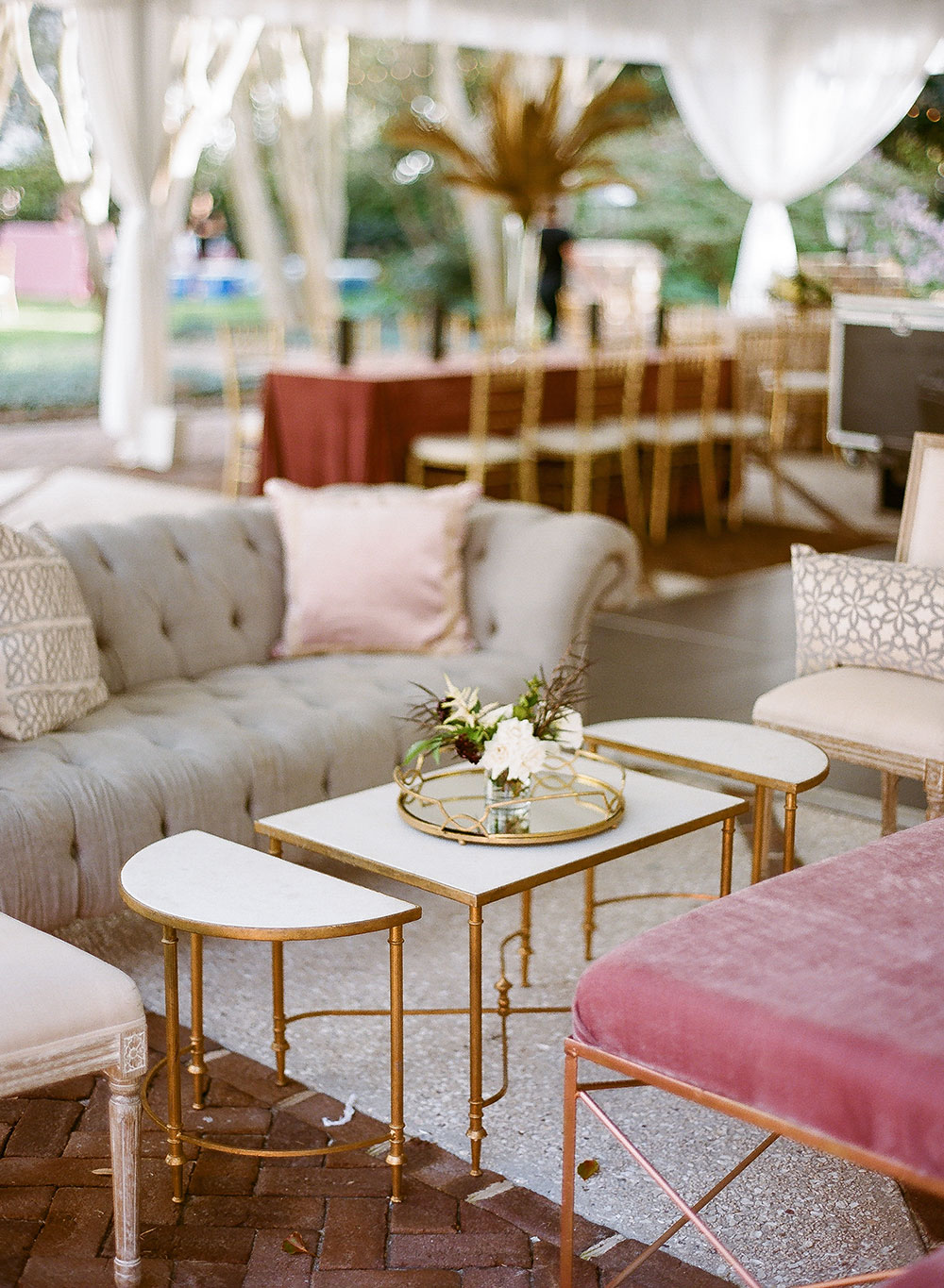 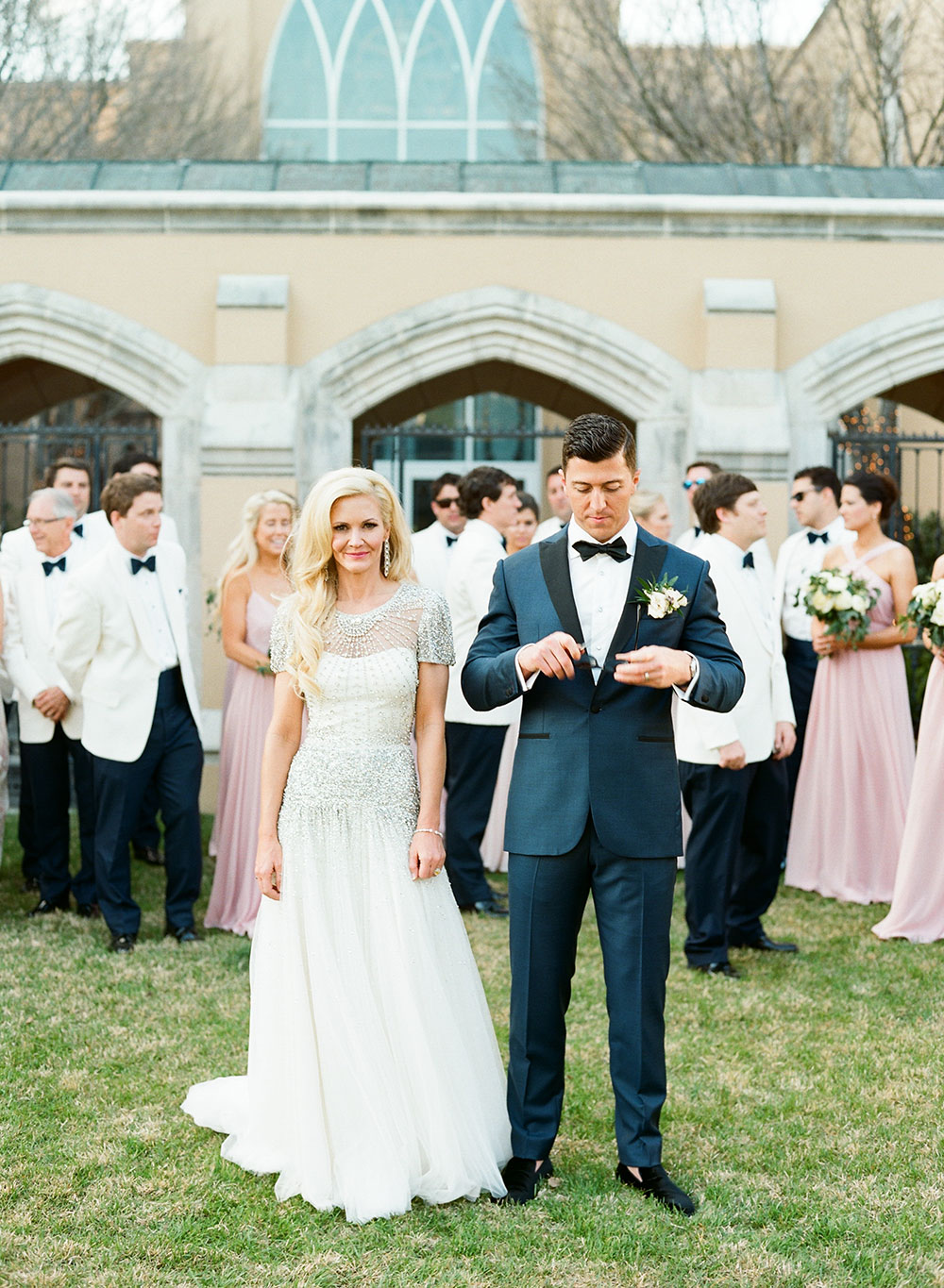 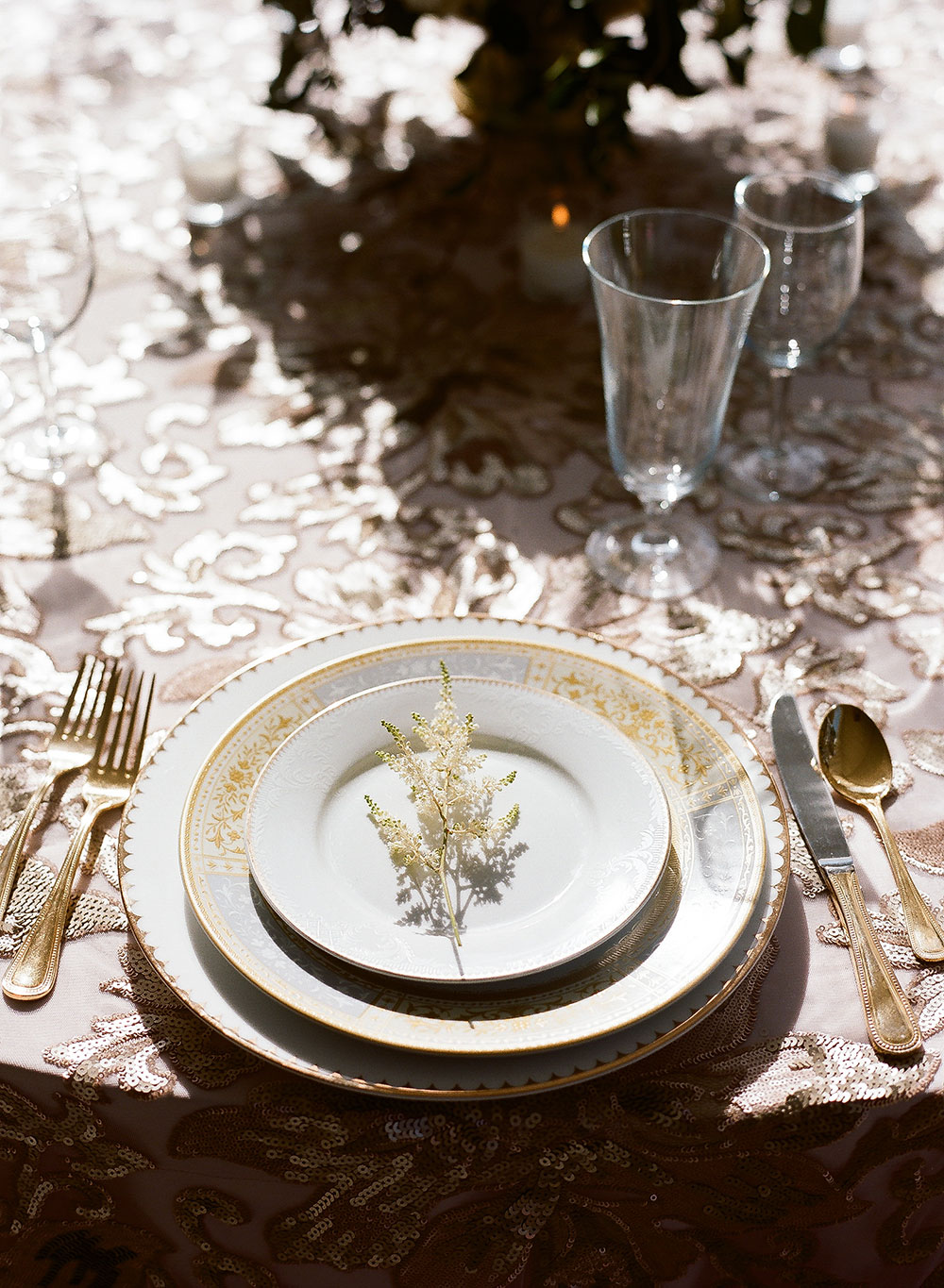 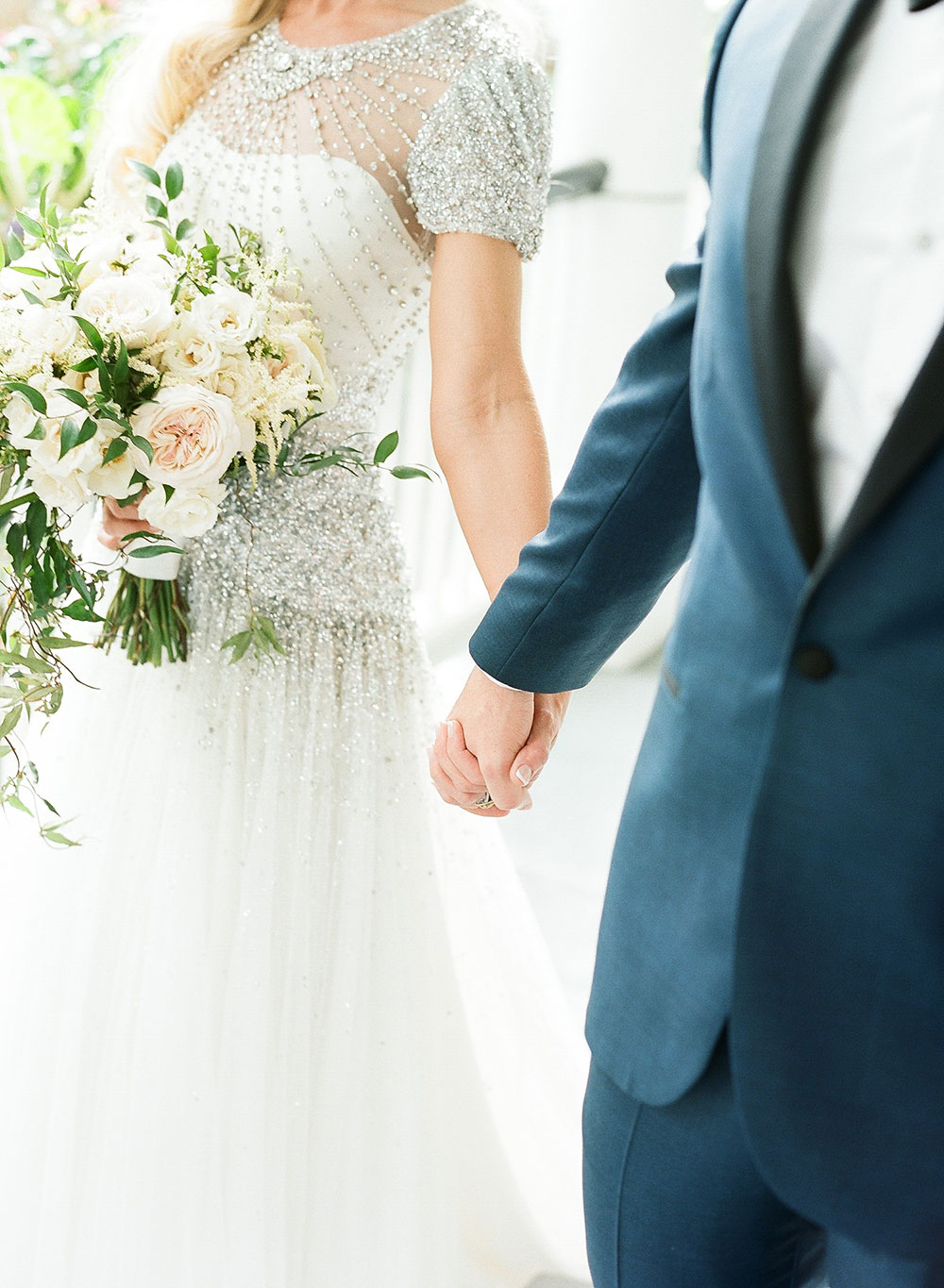 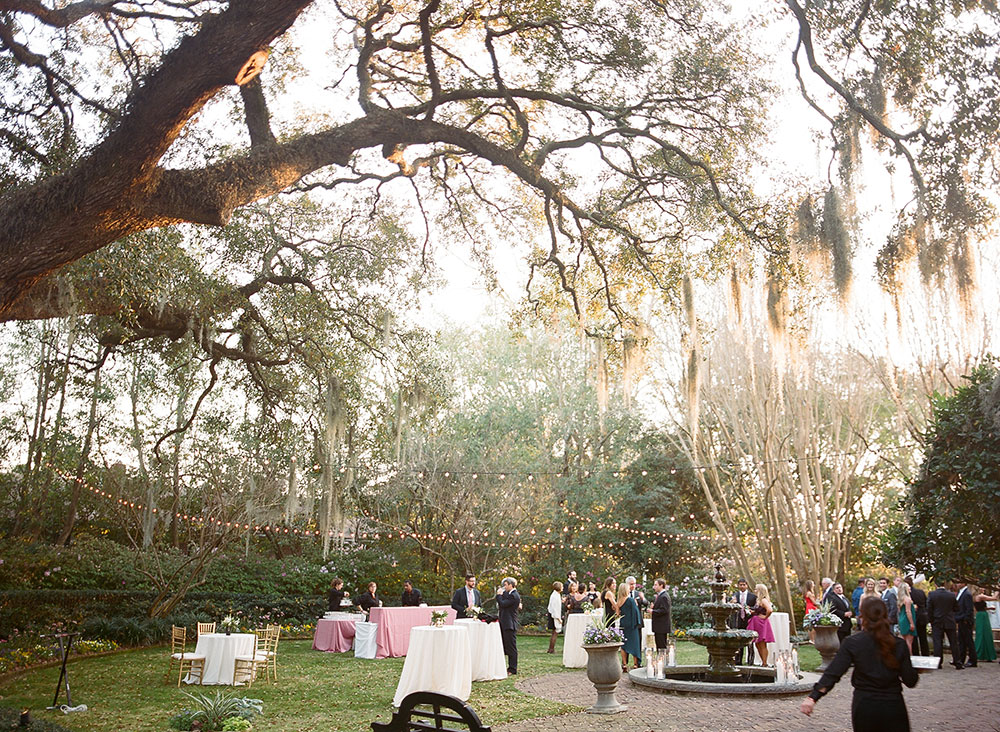 The groom and his groomsmen surprised the bride by paying homage to the classic scene from the 80’s hit movie Top Gun, serenading her with “You’ve Lost That Loving Feeling.” With beignets in hand, guests were draped with Mardi Gras beads and sequined feather masks as the night drew to an end. The couple exited to the famous New Orleans “Second Line” wedding tradition. Allison and Christian had beautiful custom-made umbrellas for the occasion, as their guests formed a long line waving monogrammed handkerchiefs and sending the couple off in style at the close of this magical night. The couple made their getaway in a vintage 1948 Oldsmobile convertible, taking in the crisp Charleston air and waving goodbye to the many friends and family who helped celebrate the new Leveques. 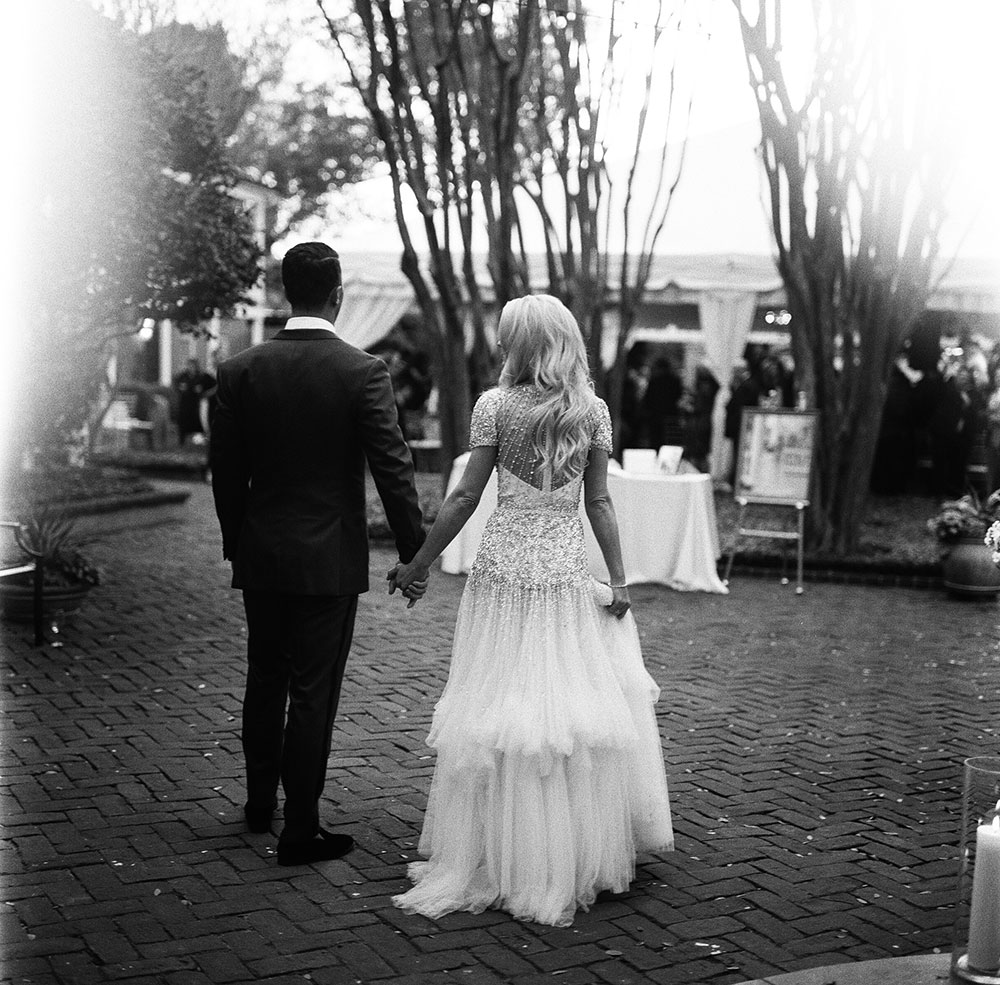 From the groom: Allison and I met at the wedding for two mutual friends, although we did not know each other previously. The attraction was instant and the chemistry undeniable. I was living in Atlanta at the time, while Allison was in Charleston. A few weeks after the wedding, Allison visited me in Atlanta on Mother’s Day, which was very special to me as my mother succumbed to leukemia and passed away when I was 20. Subsequently, I visited Allison in Charleston for Memorial Day weekend. The rest, as they say, is history. We were basically inseparable from that moment forward!

I wanted the proposal to be unique and special. After nearly five years of courtship, Allison was convinced I couldn’t surprise her but I still had a few tricks up my sleeve! I grew up in New Orleans and we were planning a weekend trip there for a friend’s wedding. I knew the timing would be perfect, as Allison wouldn’t be expecting it! My dad picked us up from the airport and was waiting to stealthily hand off the custom engagement ring I had designed myself. He dropped us off at the rehearsal dinner and wished me luck, knowing I would be proposing the next day. It was there that the mother of the bride-to-be told Allison we were invited to an intimate family brunch the following morning at the Columns Hotel on St. Charles Avenue – a New Orleans favorite of ours. Of course this was all part of an elaborate plan to get an unsuspecting Allison to the right spot for me to pop the big question! The next morning we arrived for “brunch” and were met by a photographer who told us she was there to photograph the brunch for the wedding party and asked if we minded letting her snap some photos to perfect the lighting, as we were the first from the wedding party to arrive. Allison, ever the picture aficionado, ate it up. Shortly thereafter she said, “I hope we get to do this one day,” to which I replied, “How about right now?” Before she could quite figure out what I meant, I dropped down on one knee and asked Allison if she would give me my life’s greatest honor and spend forever with me. Luckily she YES!! (Christian spent over 6 months custom designing the ring with a jeweler in New Orleans. Allison had no idea what any of it would look like…it truly is spectacular and very unique. The center stone came from Sri Lanka!)