Jason and Vonna were married in an old bank turned wedding venue! Treasury on the Plaza in St. Augustine, Florida provided the perfect backdrop to combine a little vintage style with plenty of classic elegance for a wedding that has us head over heels-particularly because the photos by Lauren Kinsey are so beyond lovely. Are you ready? 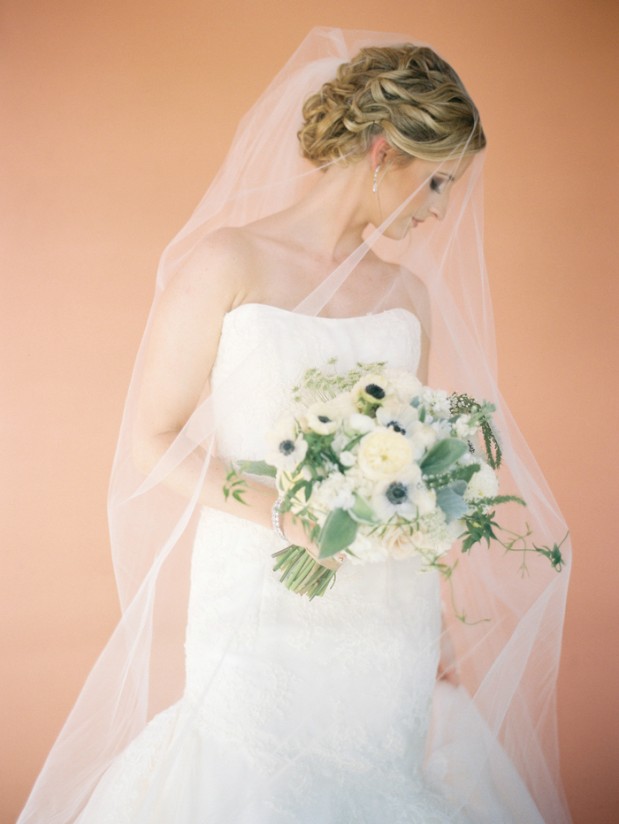 Our wedding was one of the first ones of its size to take place in the new venue, Treasury on the Plaza in St. Augustine, Florida. To say this venue is amazing is an understatement as it was an old bank converted into a wedding venue. It even utilized the old bank vault as a bar now! 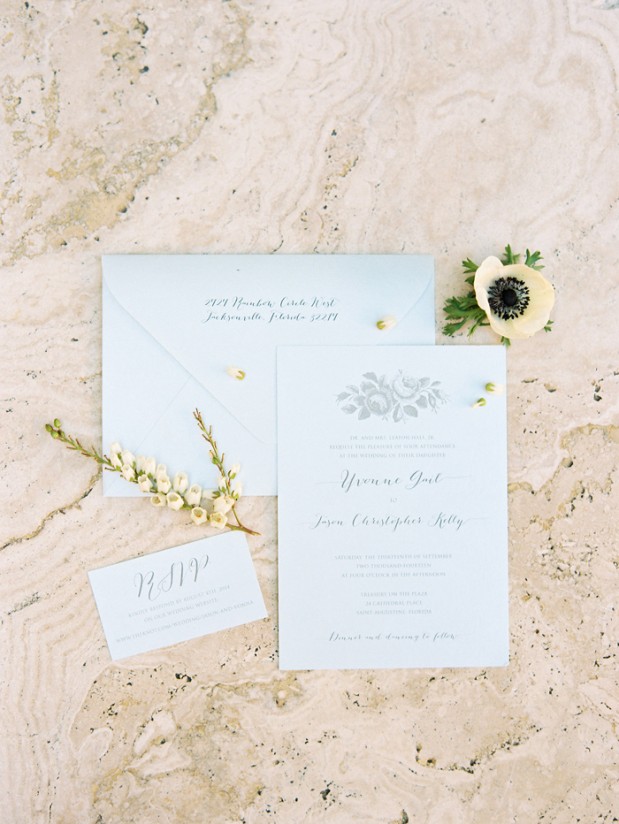 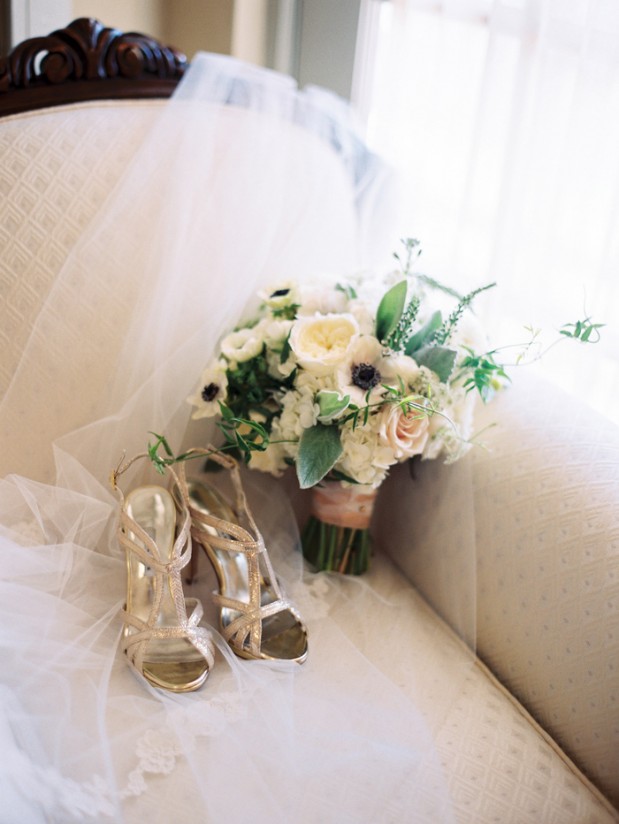 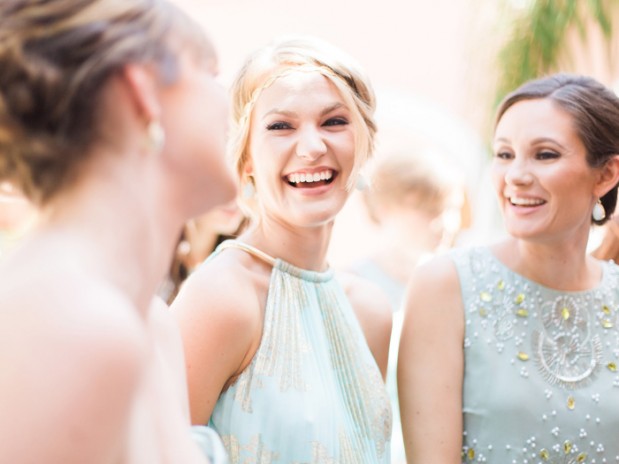 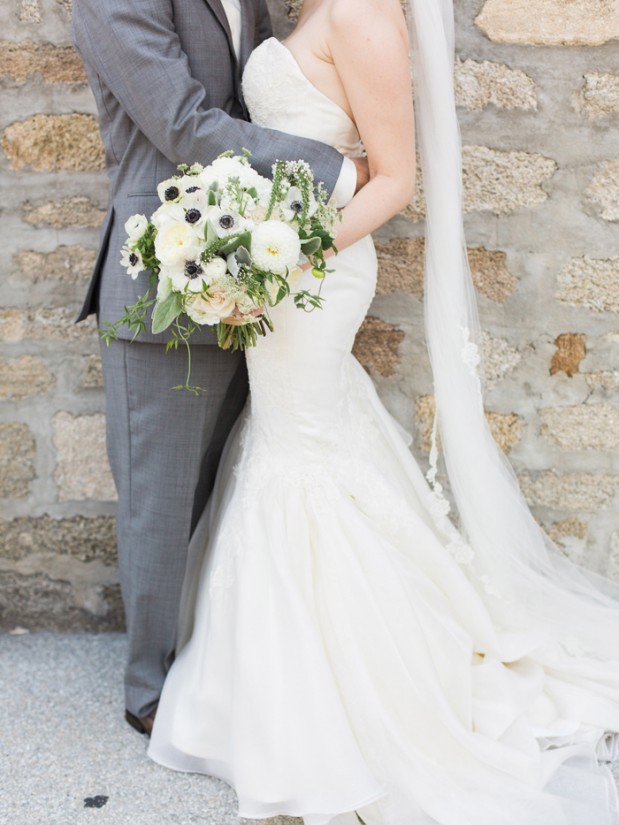 I was a little nervous to start dress shopping because I had been a bridal consultant all throughout my college years and had seen so many dresses over that time. Now that the tables were turned on me, I had to really think about what I liked and did not like when it came to wedding dresses. I had gone to 2 different boutiques before finding my dress at the lucky third one. It was not something I was originally drawn to, but the consultant insisted I try it on because she knew it would surprise me. Knowing that most brides end up in the dress they never imagine themselves in, I agreed to put it on, and it was just different than all the others. The designer was Marisa, and it was a beautiful strapless, fit and flare, lace and organza gown that fit me like a glove and flowed so gracefully. On my wedding day, I felt absolutely beautiful wearing it. 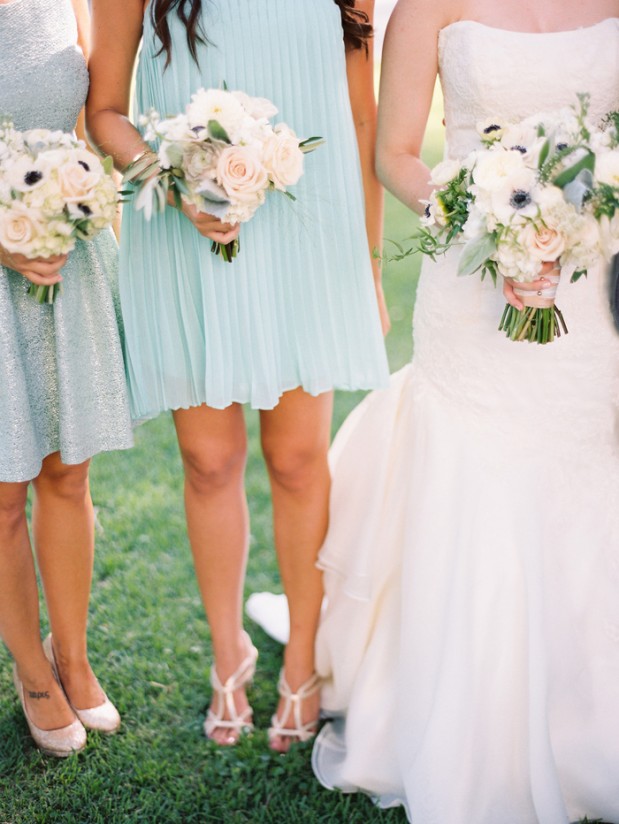 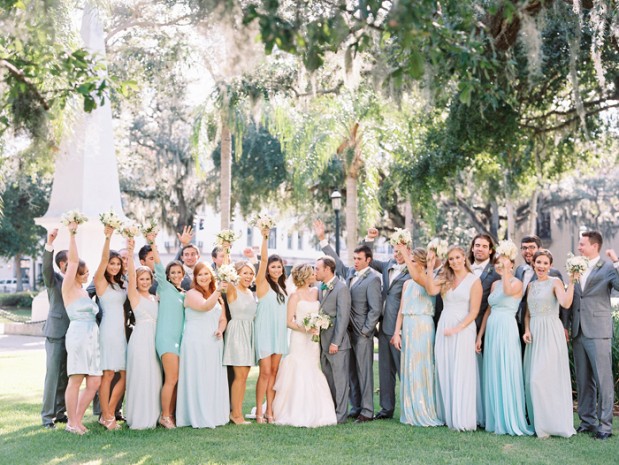 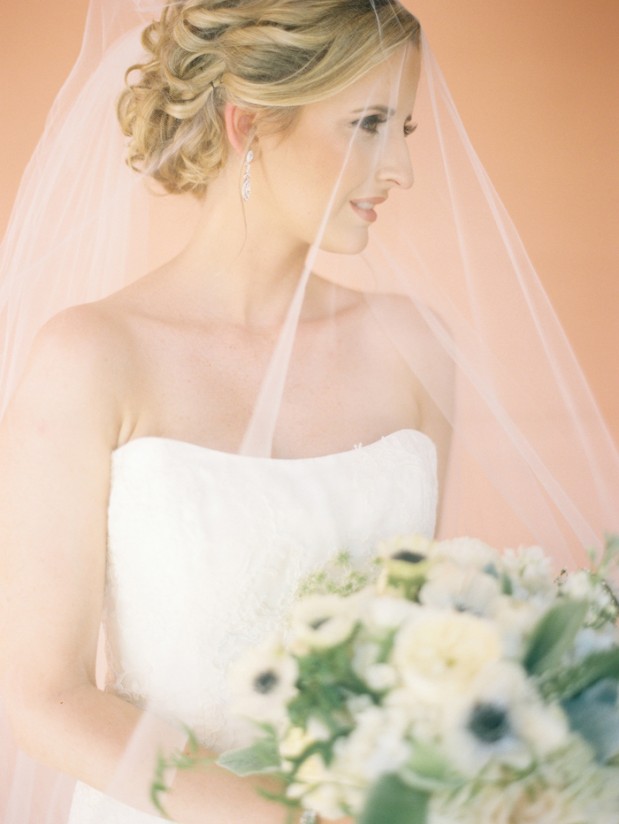 One thing I loved doing was finding out all the songs our married friends first danced to at their weddings. Once I got a list compiled, I used all those songs as the songs our guests walked into on our wedding day. I not only wanted mine and Jason’s love story to be celebrated, but I wanted all our married friends to think back on their special day and the vows they made too.

I also gave all my bridesmaids bracelets to wear that had coordinates to a special place between us. Each girl had a different coordinate, and it was so fun picking out a place for every girl and thinking back on the memories made at each one. From childhood homes to the random Italian restaurant, I absolutely loved this detail on our wedding day. 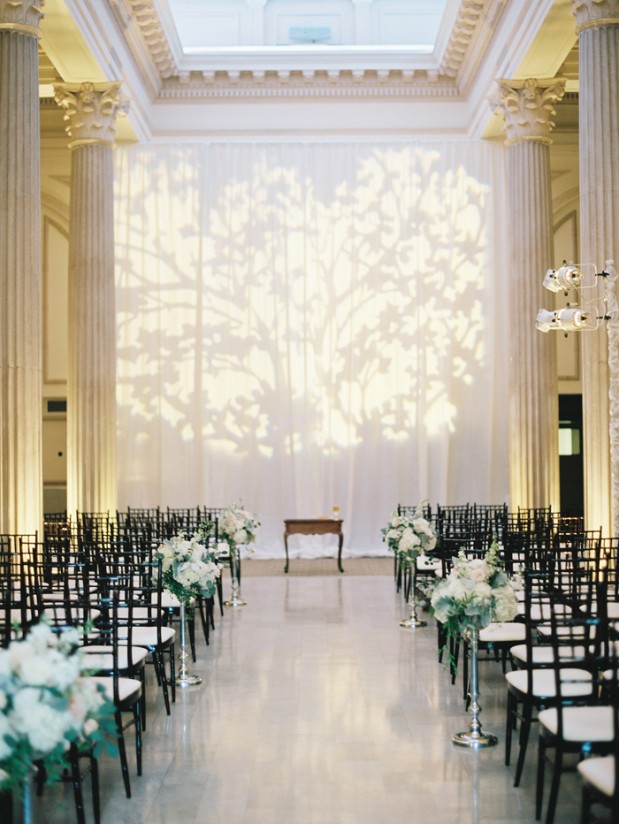 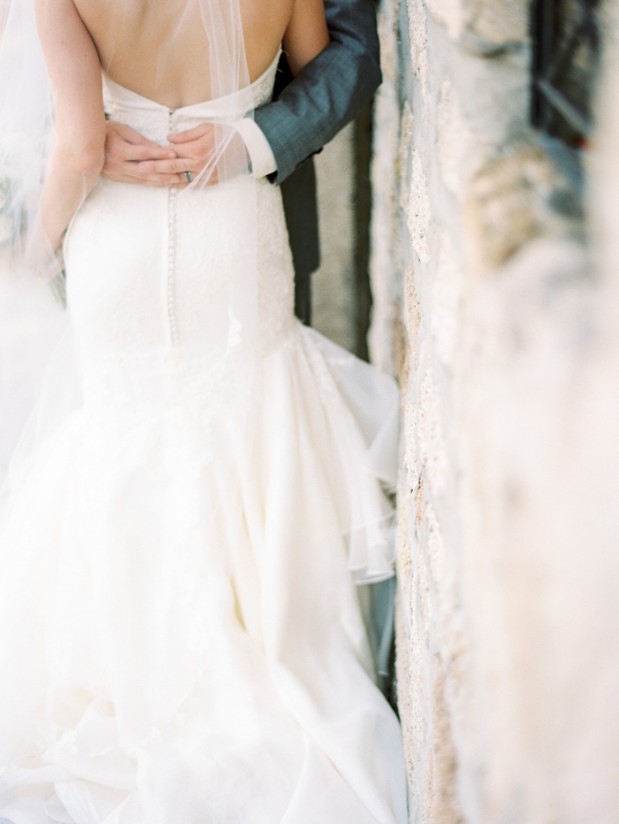 How do I pick just one? It was just the best day with all the people we love, and I was so excited to get the party started and see Jason waiting for me at the end of the aisle. When the doors opened and my dad and I started walking, I remember him telling me to slow down because I started walking so fast to get to Jason quicker! Once we started saying our vows, I kept rocking back and forth lightly tapping my foot trying everything in my power to not cry in that moment. It’s the little moments like that and others from the day that I will always remember. 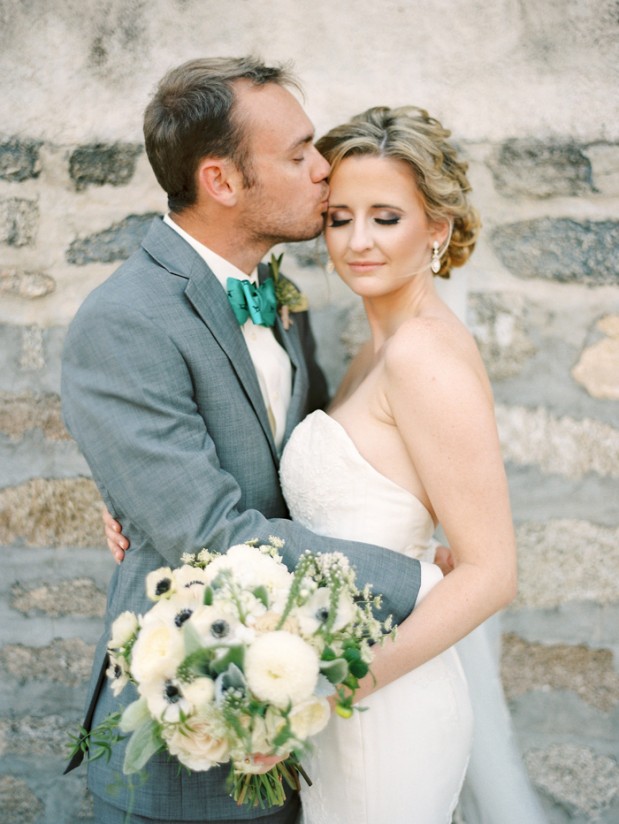 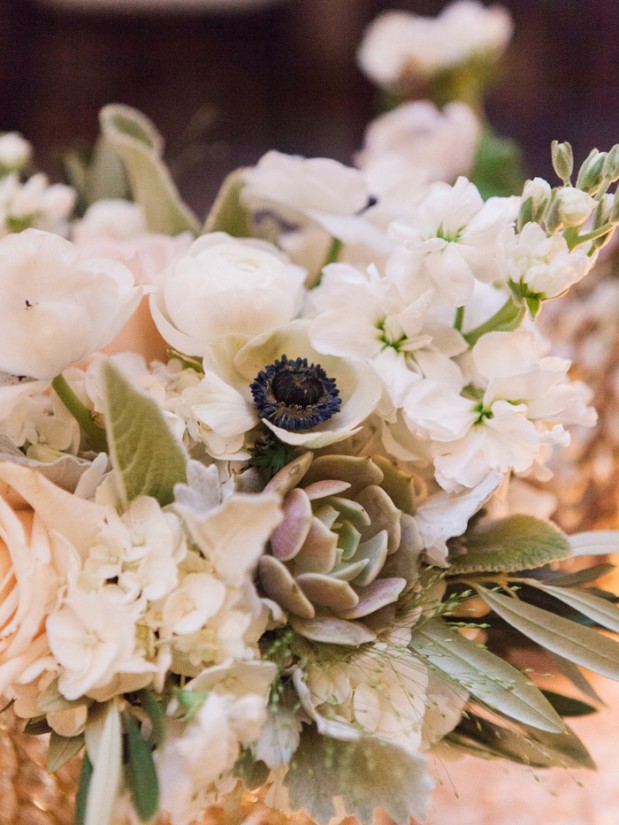 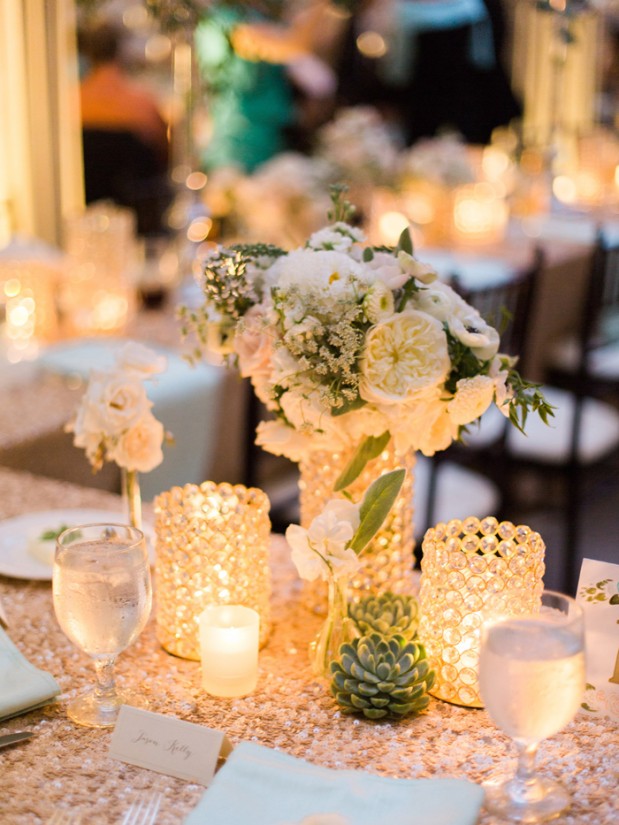 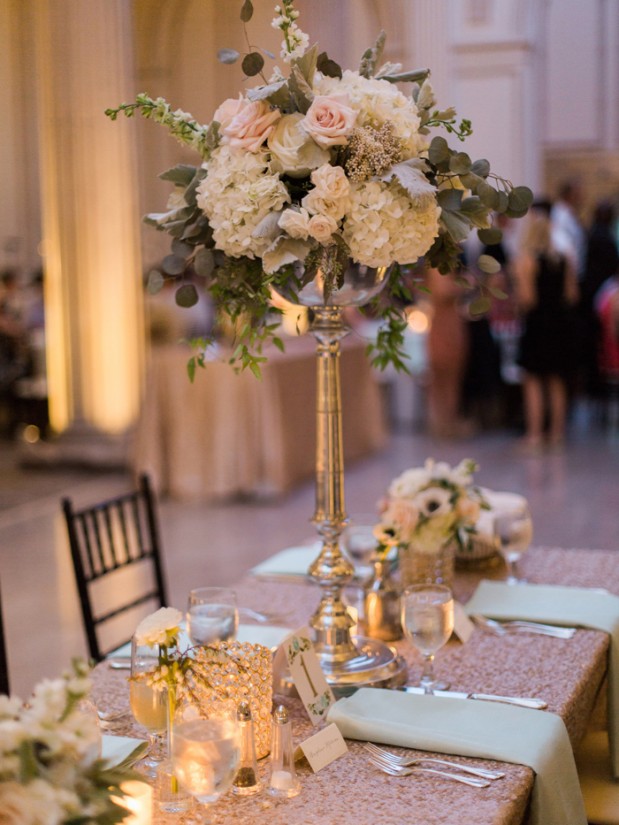 Jason and I actually met at a mutual friend’s wedding. He was the videographer, and I was one of the friends asked to be the “bartender” even though I had never successfully opened a bottle of wine at that point (you can imagine how that went). In between breaks, Jason would come behind the bar and talk with my friends and I because he had known one of the girls from high school. It was there we first started talking and fast forward 2 ½ years, we got engaged on February 15th, 2014.

Jason and I had determined that we were not going to go out on Valentine’s Day because we did not want to deal with the crowds at the restaurants. Naturally, we assumed the day after would be much less crowded, so Jason told me we could go look for shark’s teeth (one of my new, slightly strange favorite pastimes now that I live near a beach) and eat dinner at this nice restaurant on the beach. Not suspicious at all.

When we got to the beach, we knew the exact spot where we wanted to look because a few months ago, I had found this huge shark’s tooth literally being carried to shore by a wave, so I designated that the “lucky spot.” Once we arrived, I got straight to looking for teeth only to be caught off guard by Jason saying, “Hey look,” as he points to a board sticking out of the water with a flower and a ring pop attached to it. I have always joked to him that he could propose to me with a gumball machine ring or ring pop and I would still say yes, so I guess he wanted to test that theory a little.

As I am taking in what is actually attached to this board, I turn to look at Jason as he is getting down on one knee and asking me to marry him. Now, Jason has joked before about tying his shoe on one knee, so my first thought was that he was kidding around. Well, he definitely was not as he pulled the real ring from his pocket, thus making me lose all train of thought and start hyperventilating. We still aren’t even sure the word “yes” came out of my mouth, but there is video evidence of a distinct head nod, and I promise it is my favorite head nod of all time.

After putting the ring on my finger, he told me to turn around and coming across the dunes are my two best friends, my family, his family, and more friends who were documenting the whole thing. This in turn, turns my hyperventilating into a “cry-perventilating” into his shoulders, where he had to make sure I was okay. Being in such shock, I literally went limp in his arms. After composing myself, we met up with everyone (my arms still shaking/tears still rolling down my thankfully-sunglasses-covered-eyes) and I was informed that the restaurant on the beach was really going to be his parent’s house where there had been food cooking all day long. 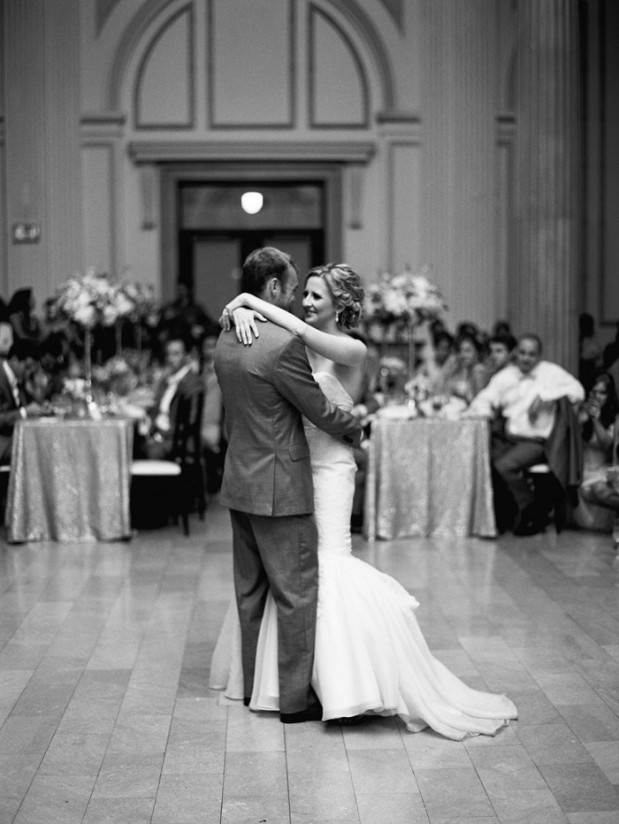