Leigh and Nick knew they wanted to get married somewhere unique in Dripping Springs, Texas, and Prospect House checked all their boxes. They also included tons of personal details including having a close friend design all the paper goods, Leigh’s cousin giving a “toast and blessing,” and her stepsister officiating the ceremony. Getting married right after Thanksgiving, they didn’t necessarily want the wedding to be Christmasy but they decided to include a few touches, such as the mistletoe on the dinner plates. Wild Sky Events captured the spirit of this fun couple in the planning and design of their wedding, and these gorgeous pics snapped by Lisa Woods Photography are certain to inspire more brides to embrace the idea of a holiday wedding! 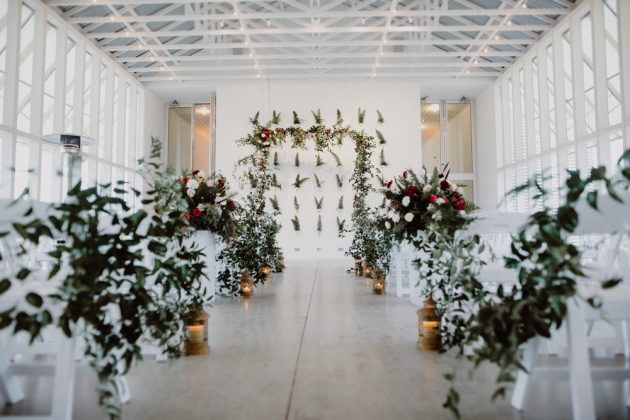 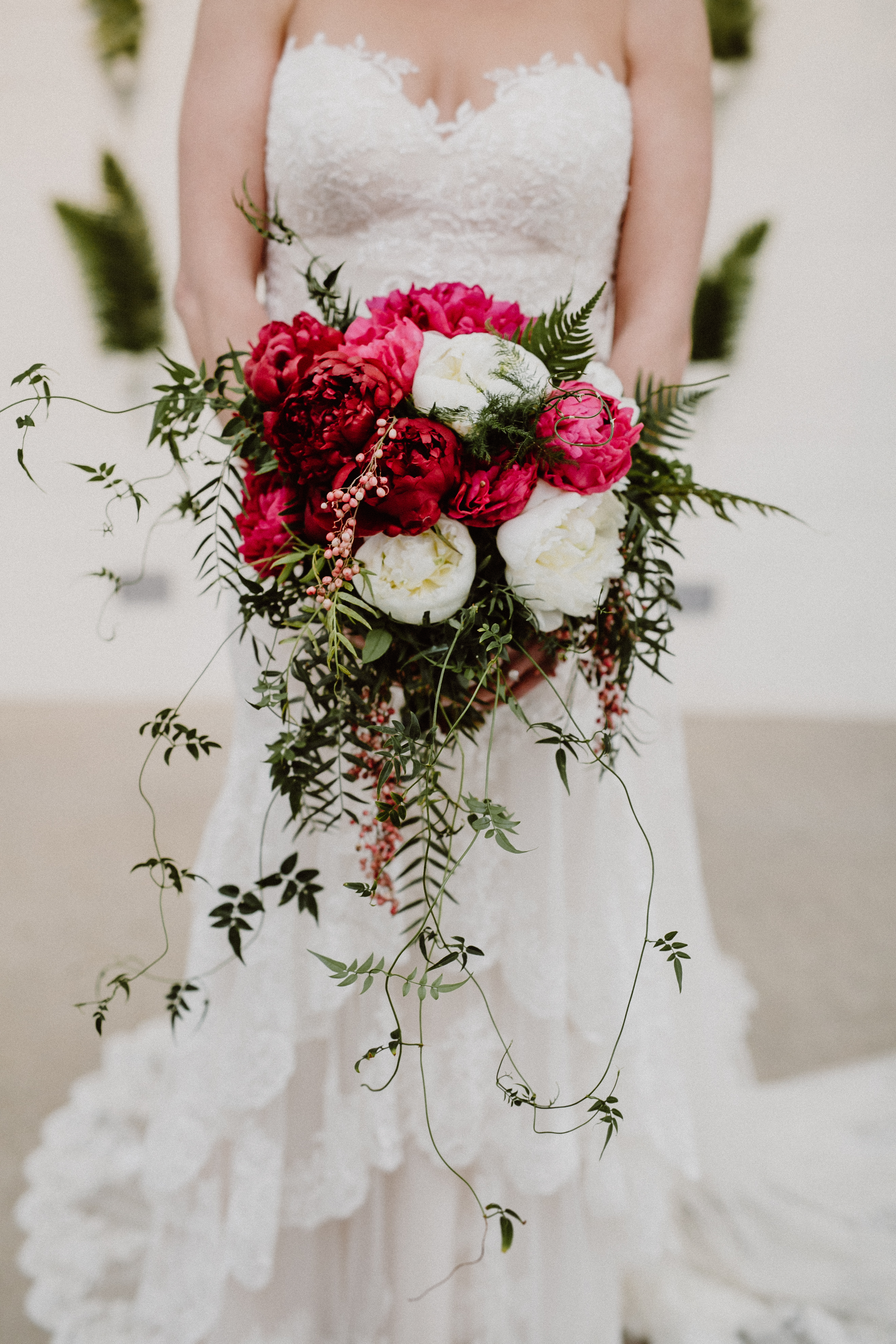 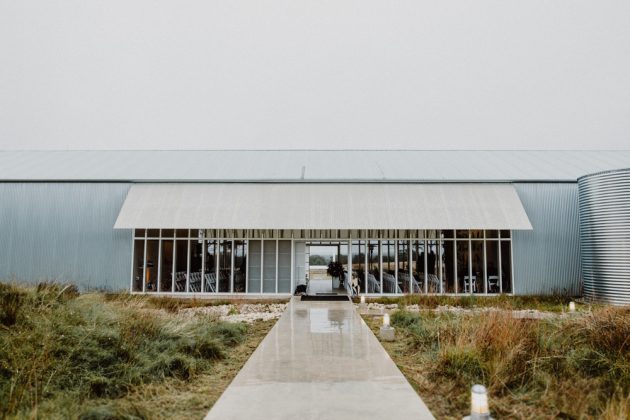 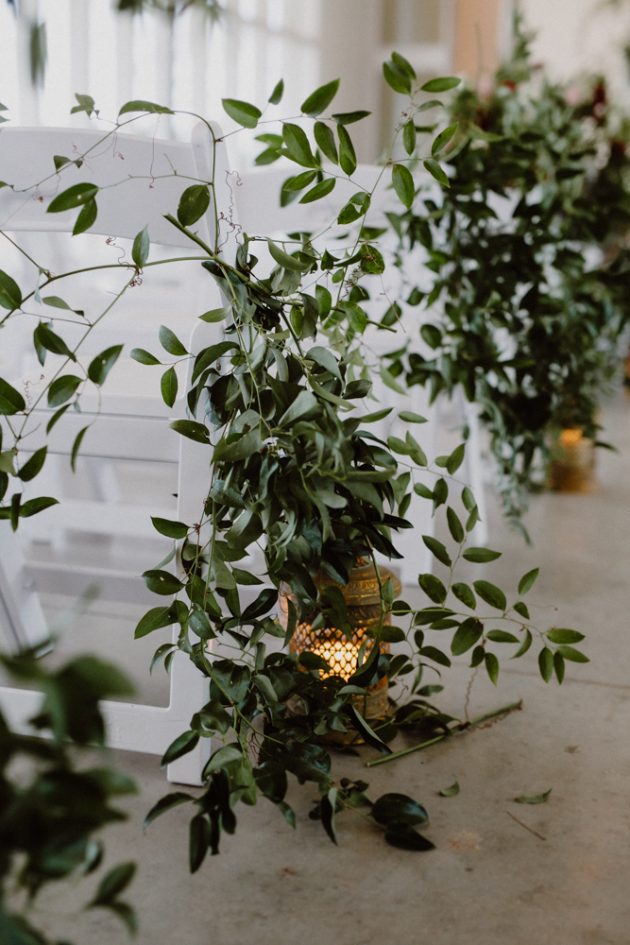 We knew wanted to get married in Dripping Springs. Ages before we got engaged I went to lunch with an old friend who let me know she had opened a wedding venue out in Dripping off Fitzhugh Rd. The next time we drove out to his parents’ house I asked if we could go see the venue. At the time it was under construction, and we weren’t even engaged yet. I immediately fell in love with Prospect House because it’s so beautiful and unique but also the personal connection we had that our friends owned it and it is just a couple miles down the road from his parents’ house. I cannot imagine getting married anywhere else. 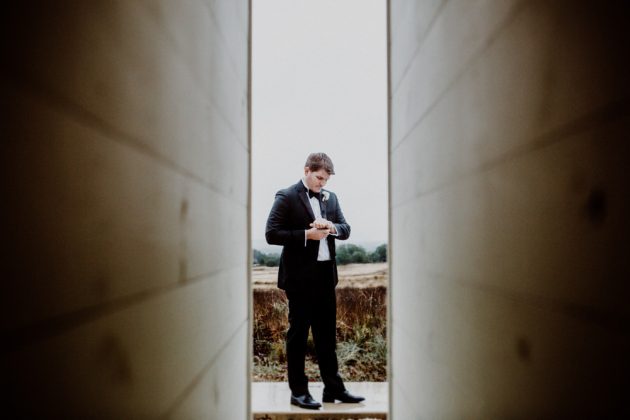 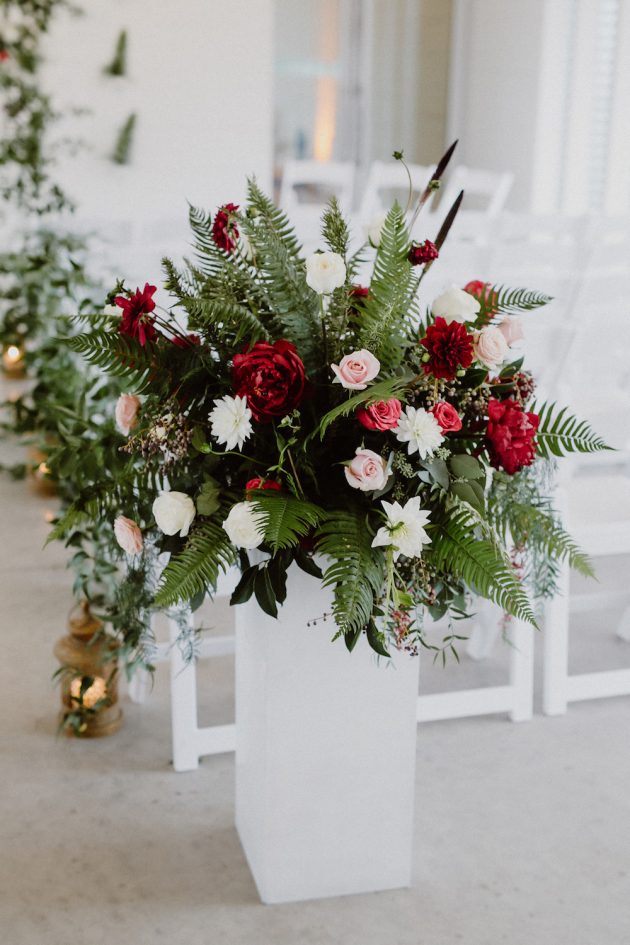 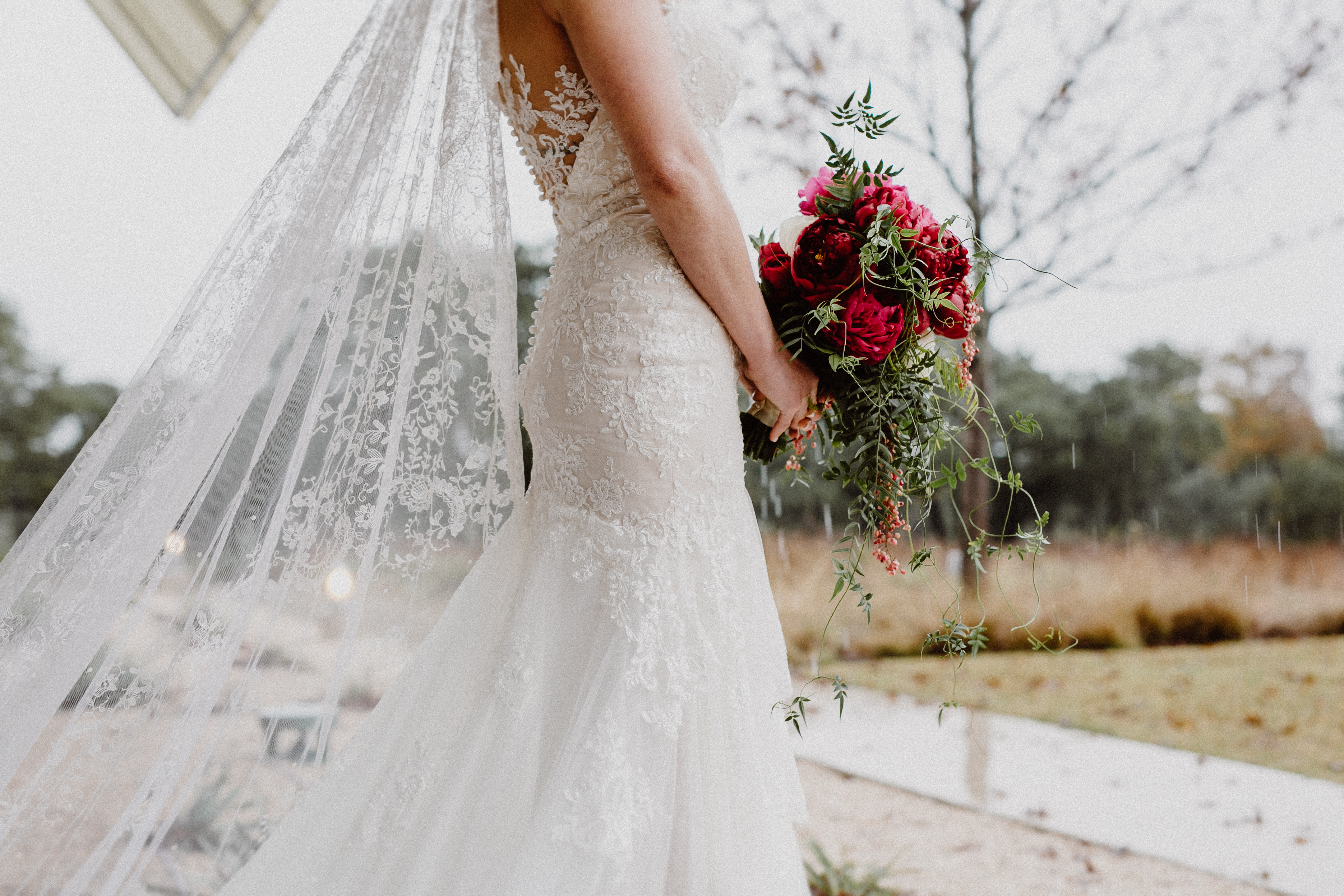 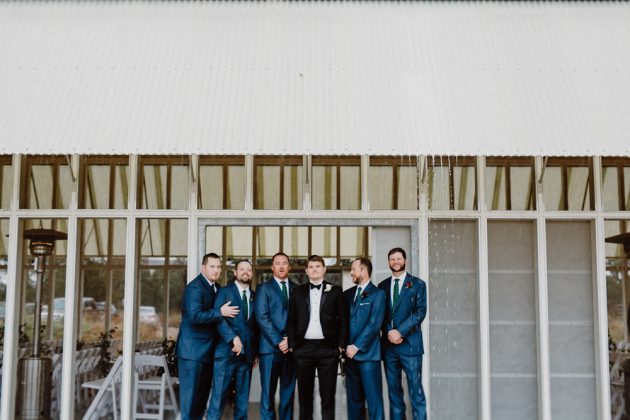 Rebecca, one of my best friends, created the drawings and all the invitations, stationery, menus, programs, and a special map for the room drops. Everyone thought I paid gazillions of dollars to hire a calligrapher. She did such an amazing job.

At the rehearsal dinner we created a “how well do you know the bride and groom” word find that was a big hit and a lot of fun. It was super intimate and that’s where we had all the speeches. We didn’t do any speeches at the wedding but my dad gave a toast. I liked only doing speeches at the rehearsal, much more personal. 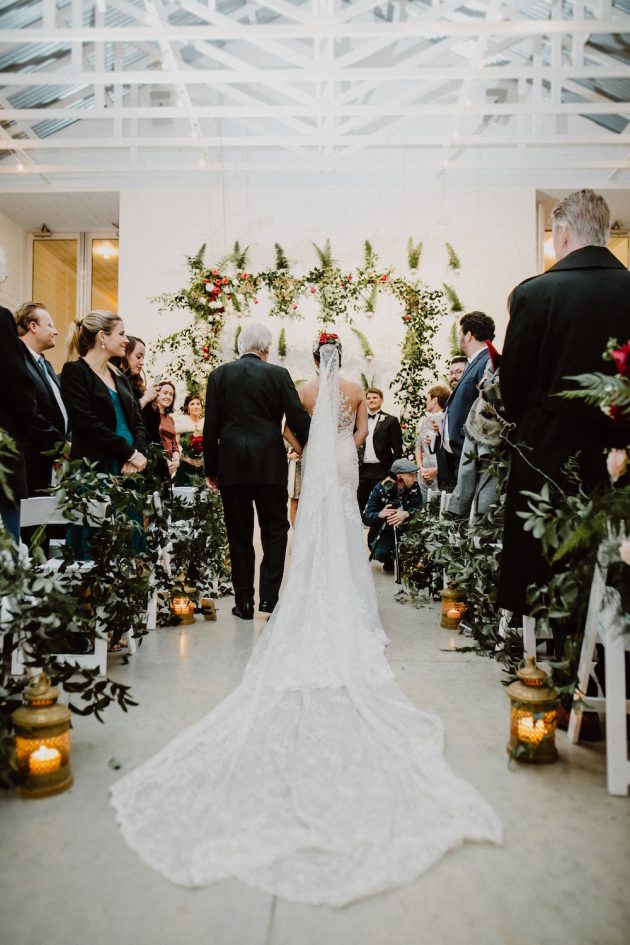 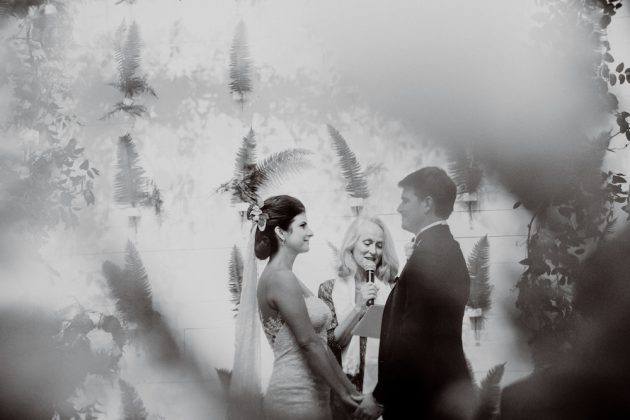 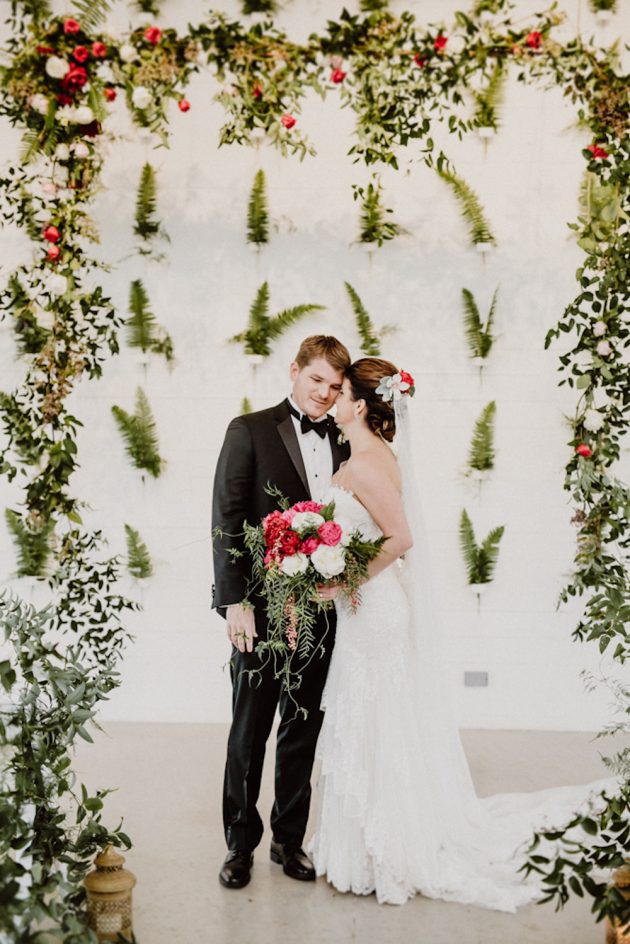 At the rehearsal dinner my father-in-law even performed “Going to the Chapel of Love” but they changed the words to “going to the prospect house.” Everyone had a copy of the lyrics and they surprised us! My father-in-law is also a BIG beer brewer and created an amazing beer for us, we still have the tap. We called it “Sam’s Very Special Beer for Very Special People”

My stepsister married us, and did such an amazing job creating a ceremony that represented us. It wasn’t corny but super personal, hilarious, and gave everyone a glimpse into who we are as a couple. It was one of the best moments of my year telling my stepmother that I was going to ask her daughter to marry us. She was so touched and it was such a special way to bring so many families together. I’ve had several people ask me, “who was the person who married you and can I have her information?” because they want her to marry them! 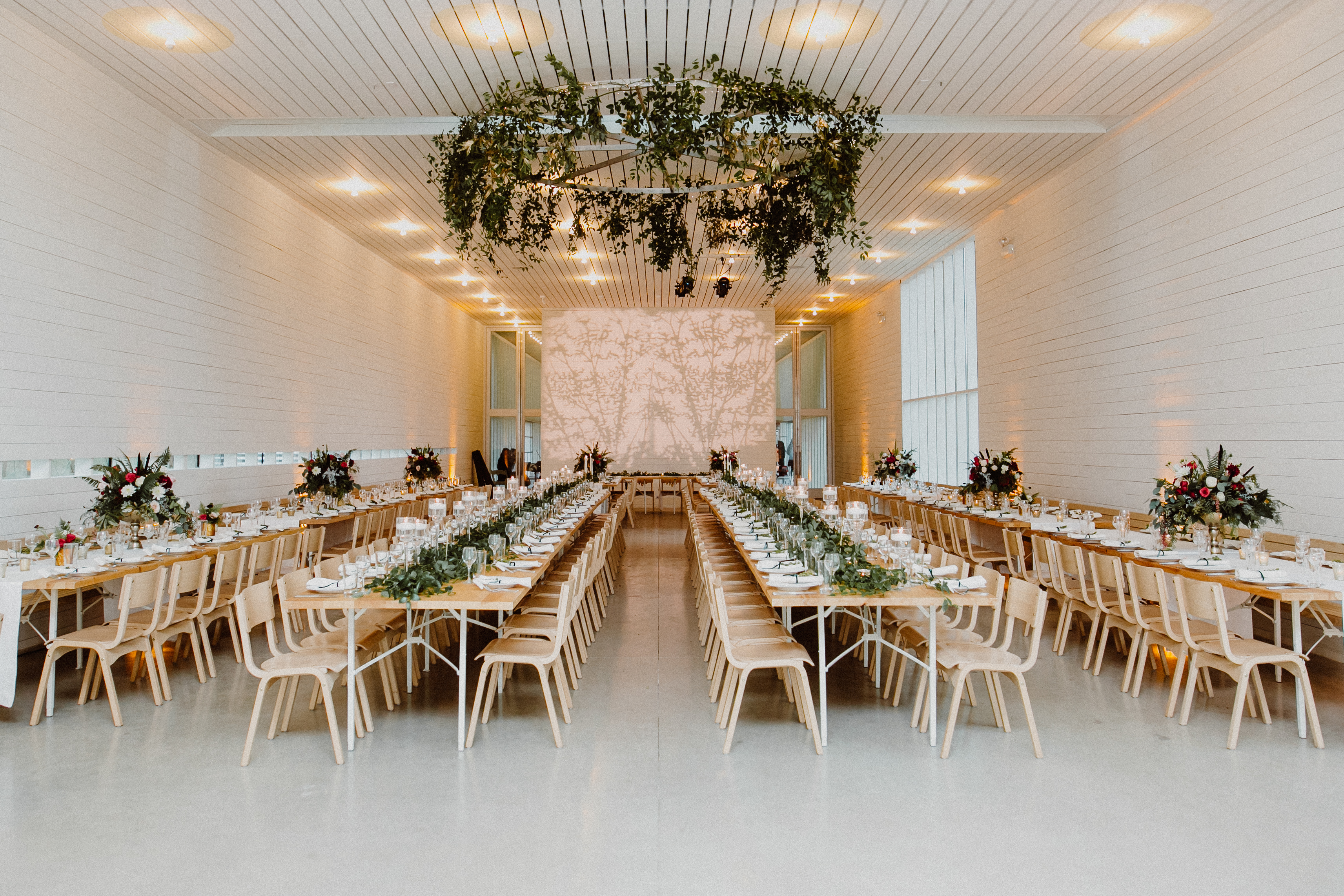 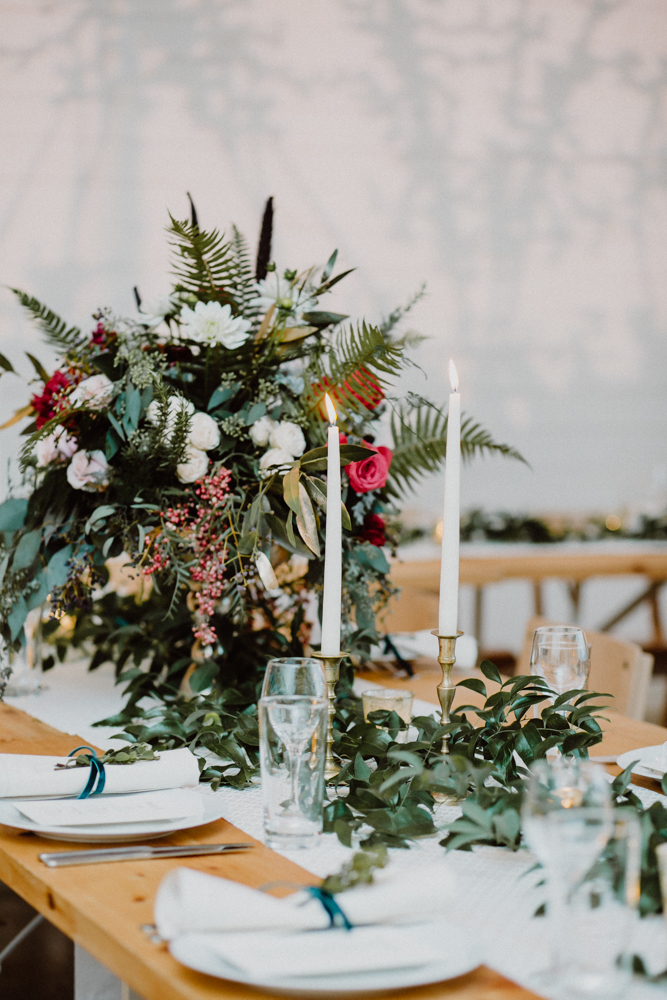 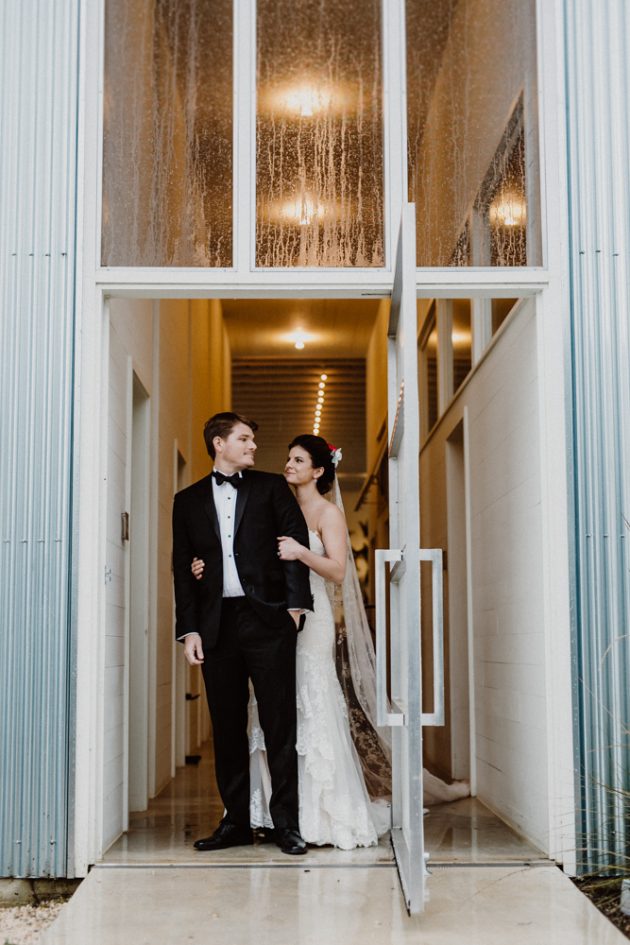 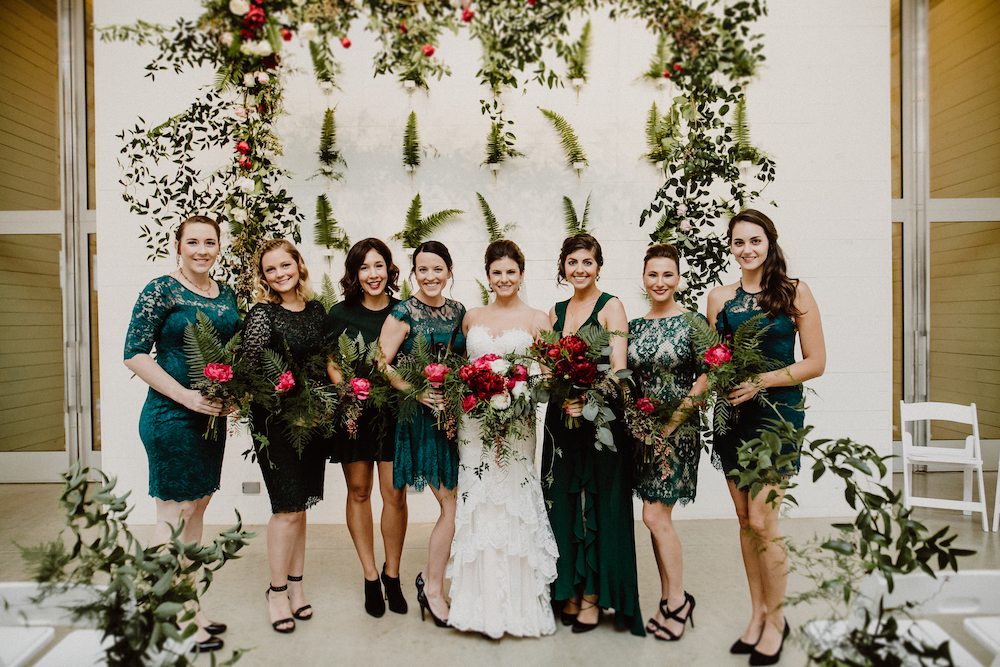 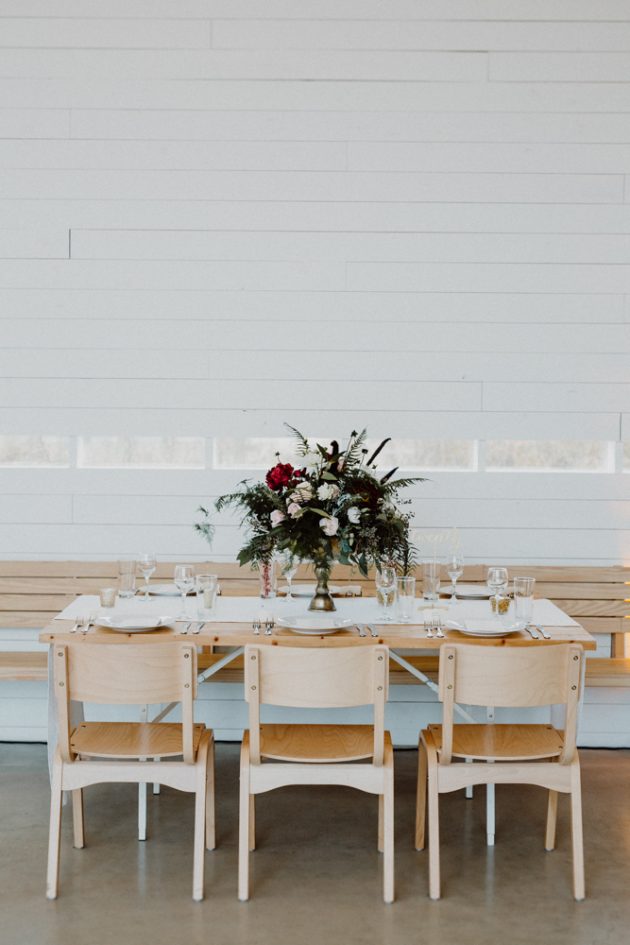 I bought it at Houston Bridal Gallery; it’s Essence of Australia. I wanted something to match the antique family heirloom veil I wore as my “something old.” I was determined to spend as little as possible on the dress, but I ended up splurging (a little). My best friend took me shopping with my mom and a couple other friends. She couldn’t be there on my wedding day (she had a baby the following day) so it was so special she was there to pick out the dress with me. After patiently letting me go to the discount places, I said I’d be okay with 5-6 of them. She insisted we go to one more place and try on just one more dress and that was the one! 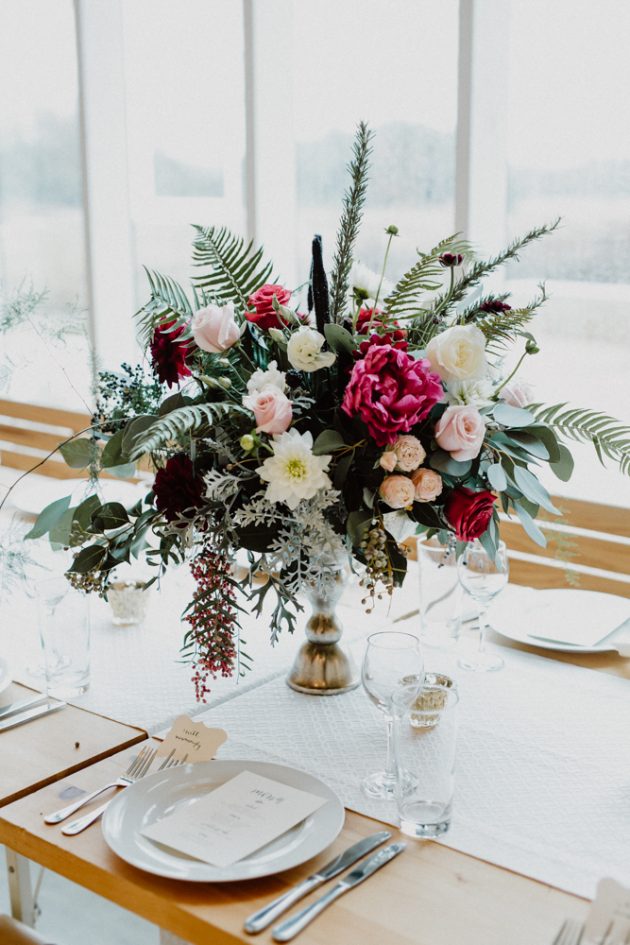 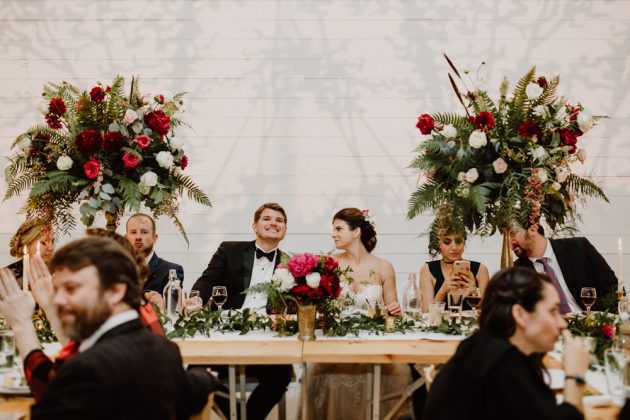 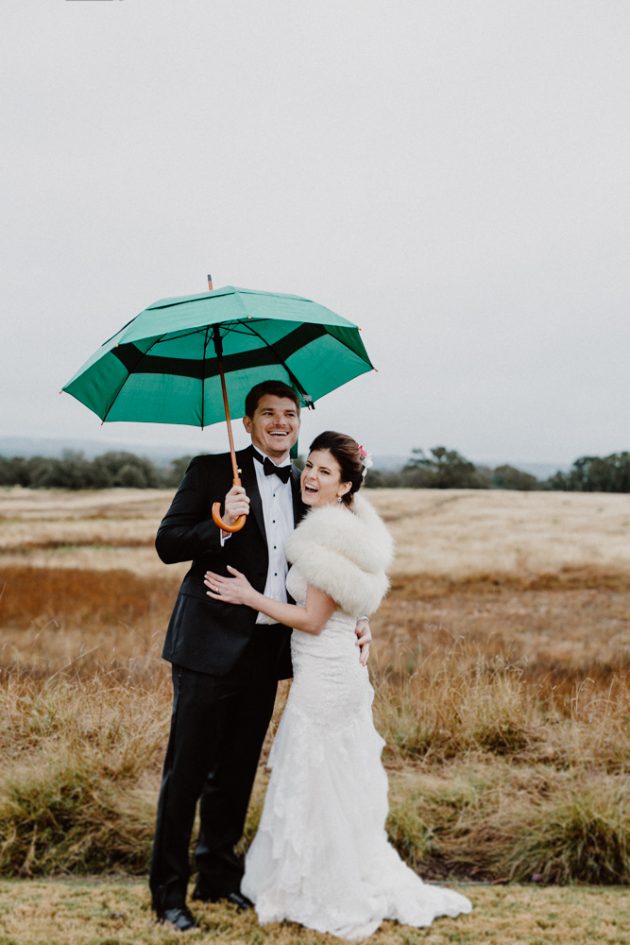 When I went to put Nick’s ring on, and saw that he was wearing the watch I had bought him as a wedding gift. I wasn’t sure he had opened it, and I was terrified it wouldn’t fit. It was such a special surprise to see him wearing it in that moment.

We worked together at a software company. I was in sales and he was my account manager. I always thought he was handsome, and had so much respect for him and trusted him. Since we worked together I kind of just didn’t look at him that way. We started hanging out more and more, going to lunch and so on. Then one really rough day we went for drinks after work and he basically moved in the next day. He proposed on a trip to NYC to visit my sister for Thanksgiving. We had been walking all day and he insisted we walk all the way from SOHO to the Hudson River because “he felt claustrophobic.” I was honestly kind of annoyed because we had walked 13 miles that day, but I didn’t make a fuss. Thank God I didn’t! When we got to the water, he asked if we could sit, which didn’t even seem funny to me because we were so exhausted. Then he popped the question. He was so nervous he was holding the ring so tight and I had to pry it out of his hands! 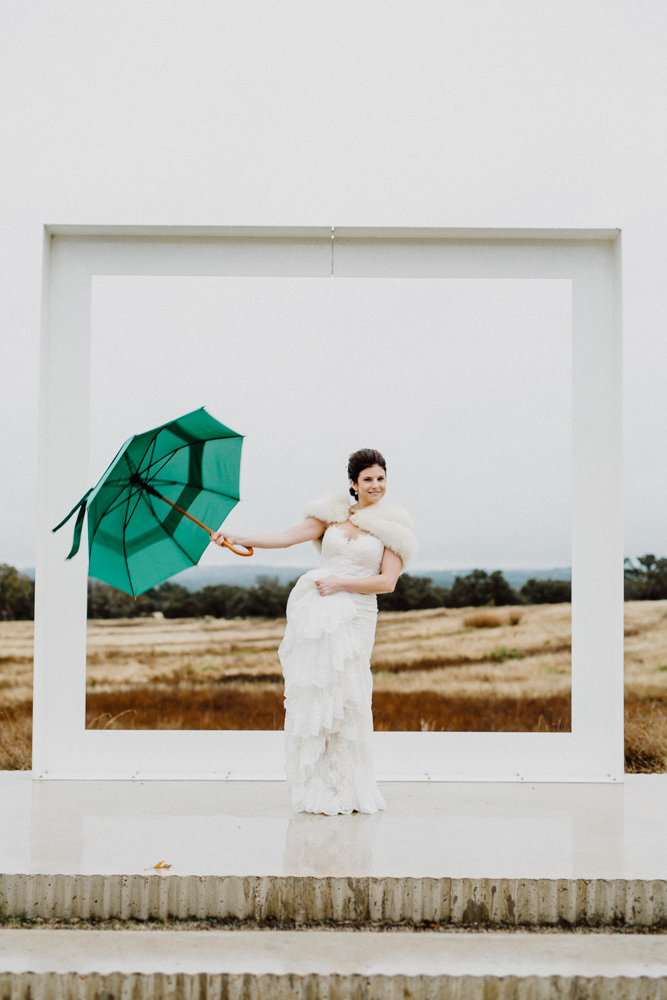 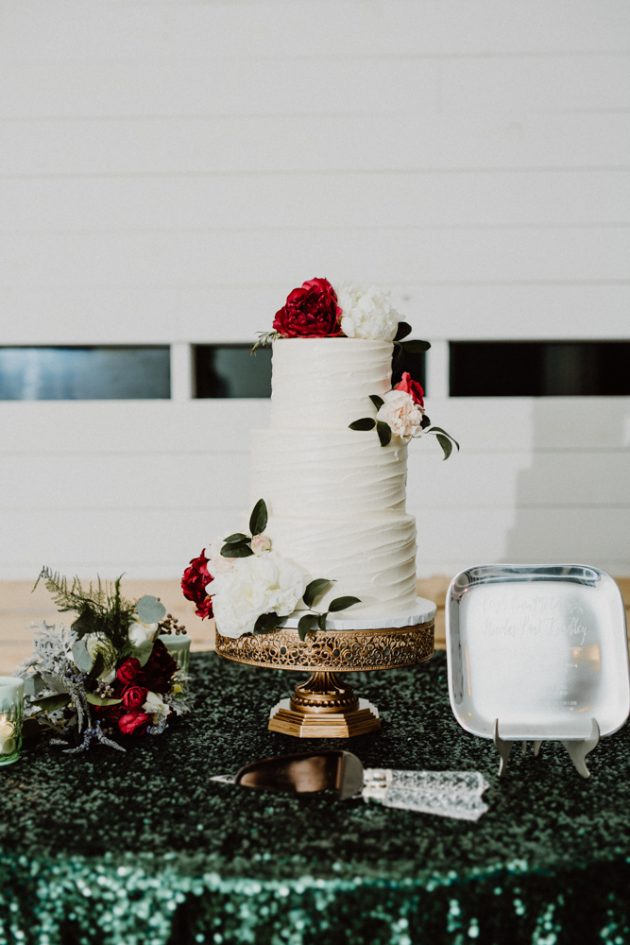 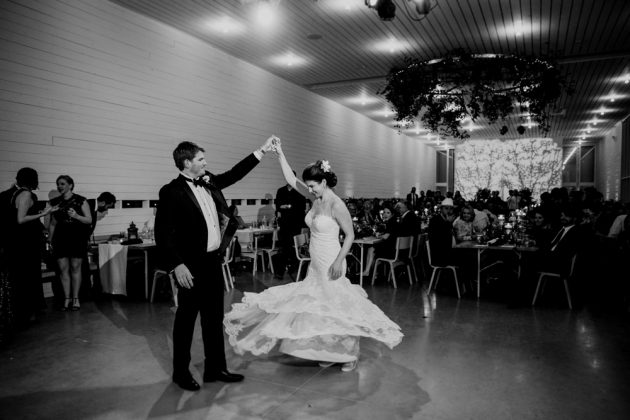