We were quite taken aback upon discovering Launderette…a most dashing mini haberdashery run by a group of, we can only assume, well dress ladies and lads. Besides offering a sampling of bow ties for purchase, their blog has also produced a twofold tutorial for any handsome man in want of bow tying skills. First, a graphic tutorial by Jared Purrington, which is both helpful and well-designed (a unique combination of attributes that is ever increasingly difficult to discover). 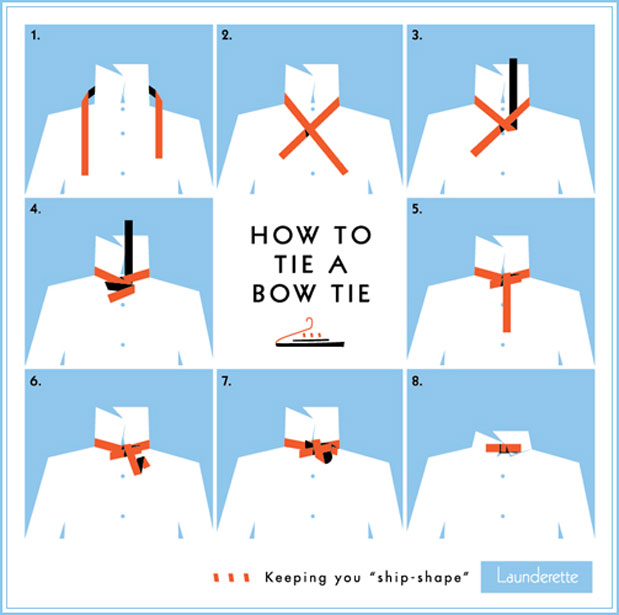 Second, to ensure every gentleman is readily prepared, our new found friends at Launderette have also provided a video tutorial. This video involves French and humor–so don’t let the word tutorial fool you into fearing boredom and resisting the urge to press play. We promise, you’ll love it…even if you are a lady without need for tying bows like a man. But we’ve already said too much. We thought we’d let Launderette make the proper (and more apt) introductions below.

The pièce de résistance to our lessons and guides, Launderette is proud to introduce its very own instructional bow tying tutorial. With so many, quite serviceable, bow tie videos out there, we knew ours had to be something unique. So in homage to our favorite new wave auteurs, we put together a how-to film with a french twist. It figures Cahiers would have wanted you to know how to get these things around your necks as much as we do.

We hope this inspires a few of you to maybe try an alternative to your bolo. Rest assured, with a little practice it’s as easy as tying your shoes.