Andrea and Ian live in downtown Toronto. Andrea adores fashion and now works in that world too – so it is no surprise that she chose probably the coolest shoes in the world for her big day. A pair of truly unique, super rad Nicholas Kirkwood shoes. He is a British shoe designer that makes beyond rad shoes that are quite jaw dropping. Andrea’s certainly fit the bill! Her beautiful Elizabeth Fillmore dress was a perfect match for those amazing heels. She got ready at their condo – which was great since her atelier is right there too– chock full of her fashion inspiration which made for a great backdrop.

Their wedding was on the eve of the first day of Fall. The lovely florals mixed in with fruits had a real harvest feel and were perfect for a September wedding. Andrea & Ian had a feeling that it might rain on their big day – so they came prepared and bought some really fun umbrellas. They had their wedding and reception at a tres cool, tres awesome restaurant called Boehmer on one of the city’s funnest streets Ossington. We adore the chic non-fuss idea of an intimate restaurant wedding! Are you ready for the rest of the story and photos, thanks to A Brit & A Blonde. 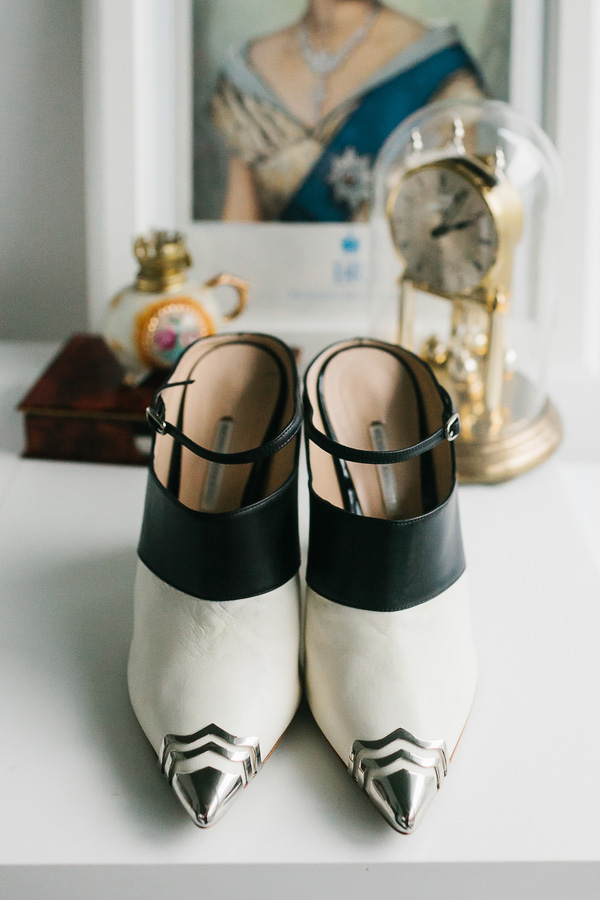 Definitely the venue. We were originally looking to have a wedding out in the country, but couldn’t find a location we loved. We went out for dinner at Boehmer, and it instantly clicked for us. We shifted gears and completely changed the plan for our wedding. We hadn’t planned on having a small intimate wedding, but we’re so happy we did. We loved bringing everyone together in such a great atmosphere. The venue on it’s own was fantastic, but we loved adding our own personal details. We wanted to keep everything pretty casual, and having the ceremony at the front of the restaurant worked perfectly. Friends and family gathered around, mostly standing, with their drinks in hand, as a family friend officiated. The fact that it was raining made us extra happy we chose an inside venue. The rain also allowed us to add some of our personality into the shots with our umbrellas. Once the rain cleared, the sun came out and we got some of our favourite pictures. The location of the restaurant lent itself well to the photos. We don’t know anyone else who had graffiti for the background of their wedding shots. There’s something really cool about being so dressed up, and having the environment being so relaxed. 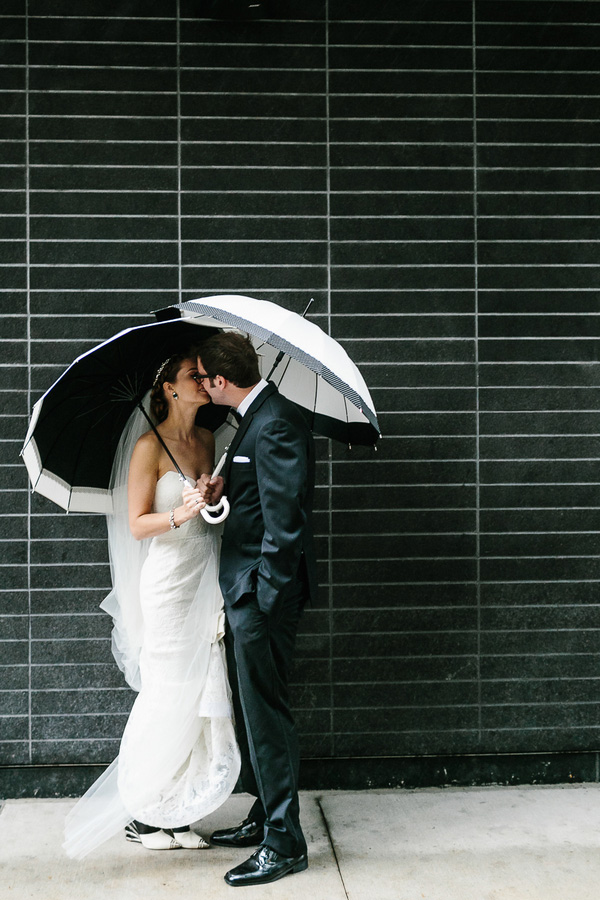 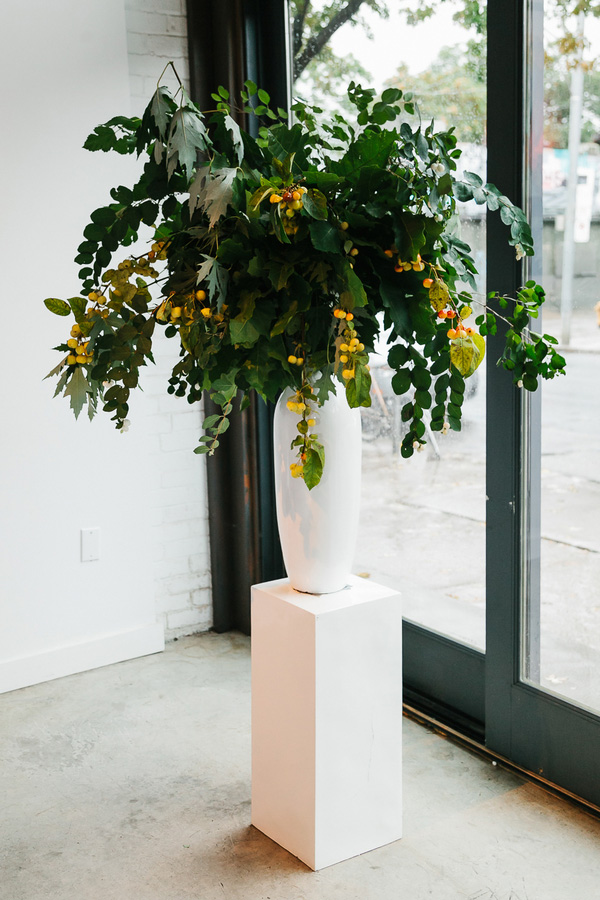 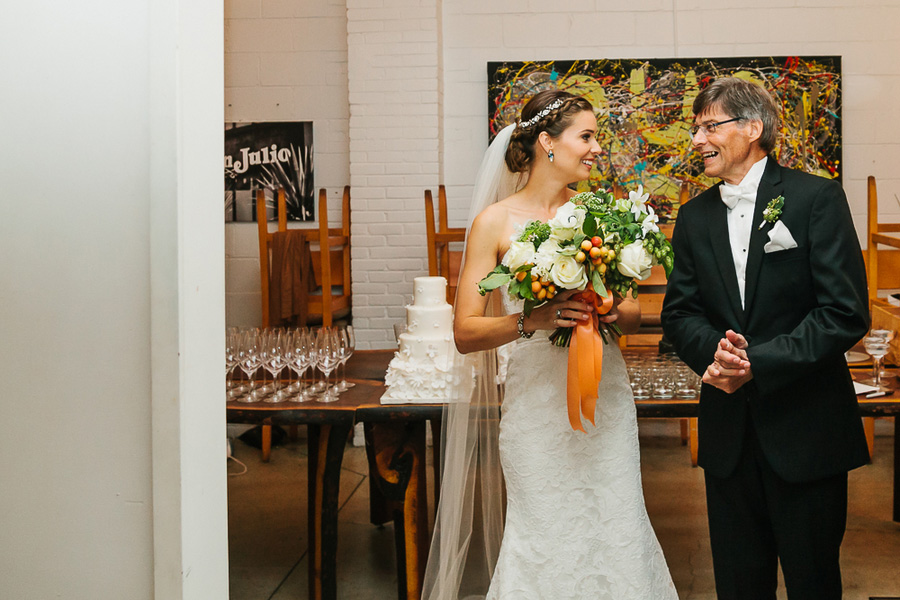 I absolutely loved my gown by Californian designer Elizabeth Fillmore. I found my gown very early on in the process at Mrs. Bridal. We planned our wedding in 3 months and I’m so grateful that the girls at Mrs. Bridal and the designer were happy to work with me to make this happen. The first thing I noticed about the gown and the thing that really sold me on it was the modified sweetheart. It has hard straight lines that really make it unique. She designs using beautiful clean straight lines which turns a regular strapless into something innovative and modern.This particular dress was so clean cut yet undeniably feminine at the same time.  On my dress she used italian lace which added a softness to the look. She obviously knows how to design for the woman’s body because the low back, the synched waist, and the train gave an overall lengthening and powerful effect.  I also wore a cathedral veil which I loved. That to me just topped it all off. 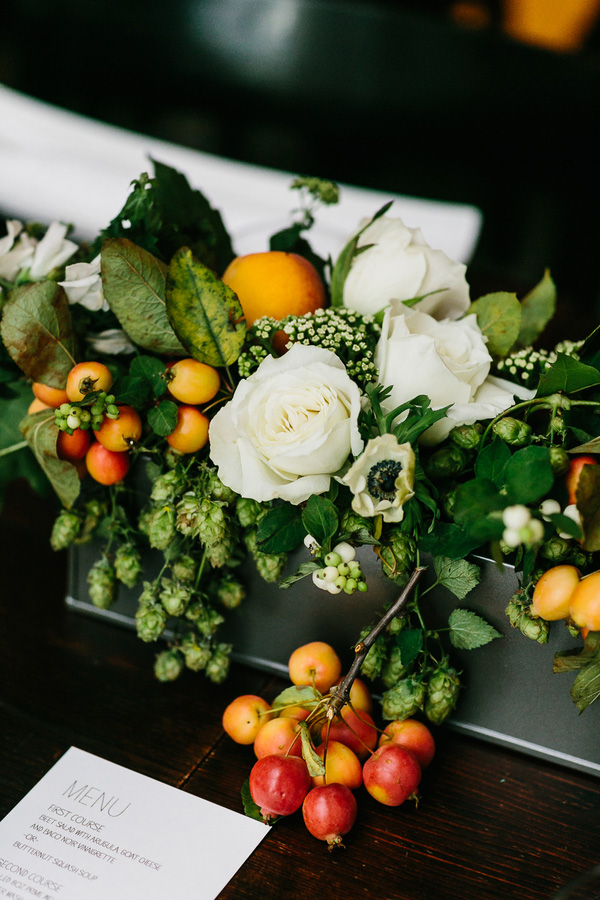 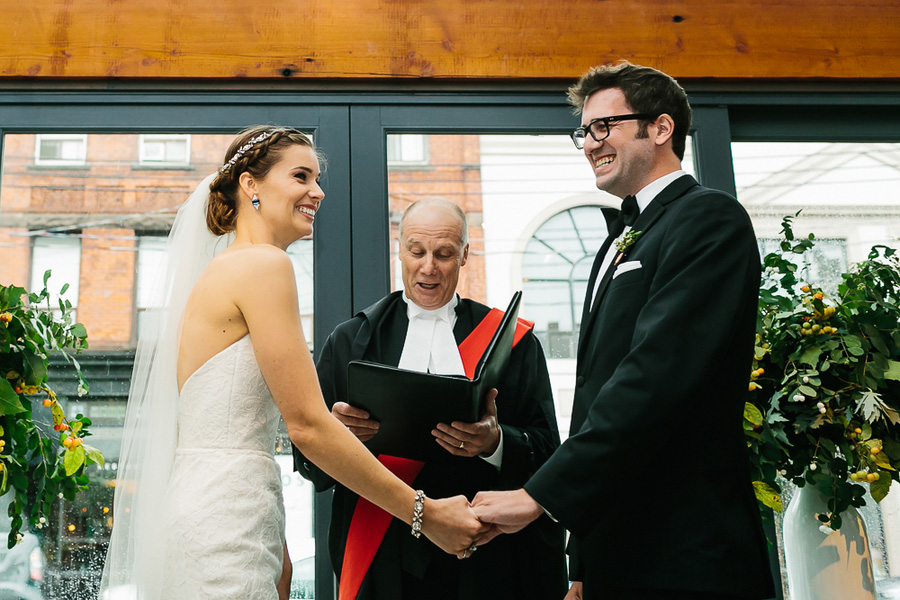 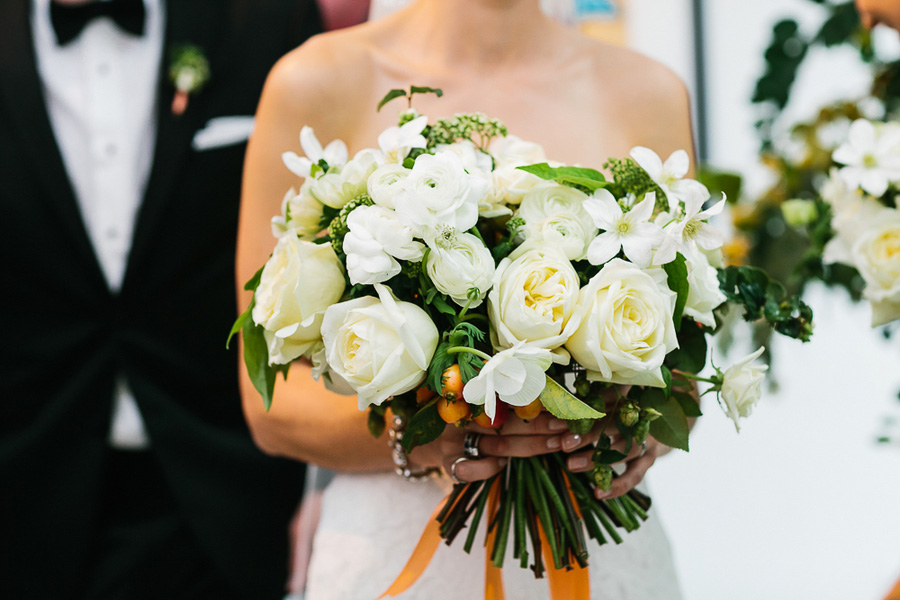 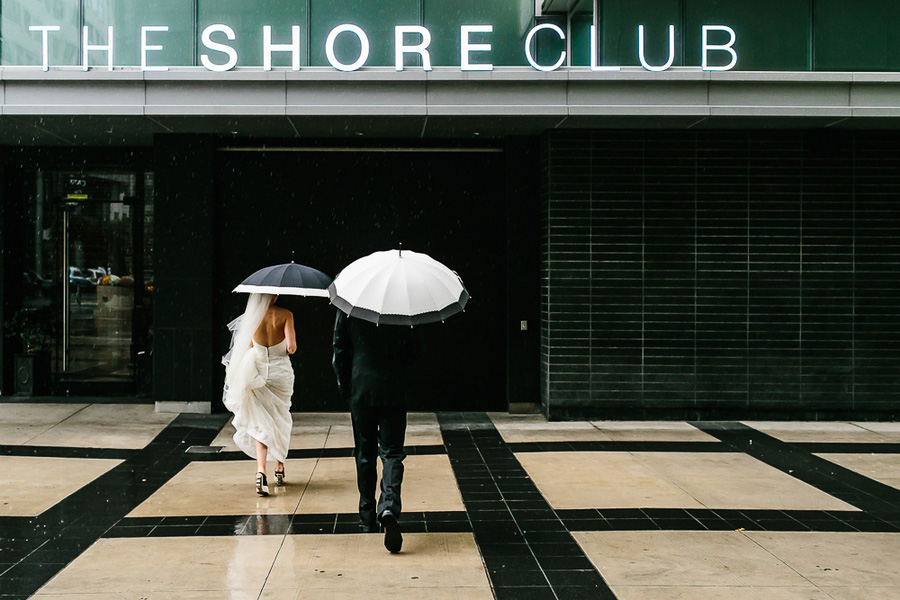 What were some touches added to make the day personal?

We really thought the following added a personal touch. Putting all the table numbers in old picture frames, alongside our parents framed wedding pictures. The flowers and the hops vines woven under the bar. Having a saxophone player walking around during the reception. For some of our close friends, we used their nicknames on their place cards. 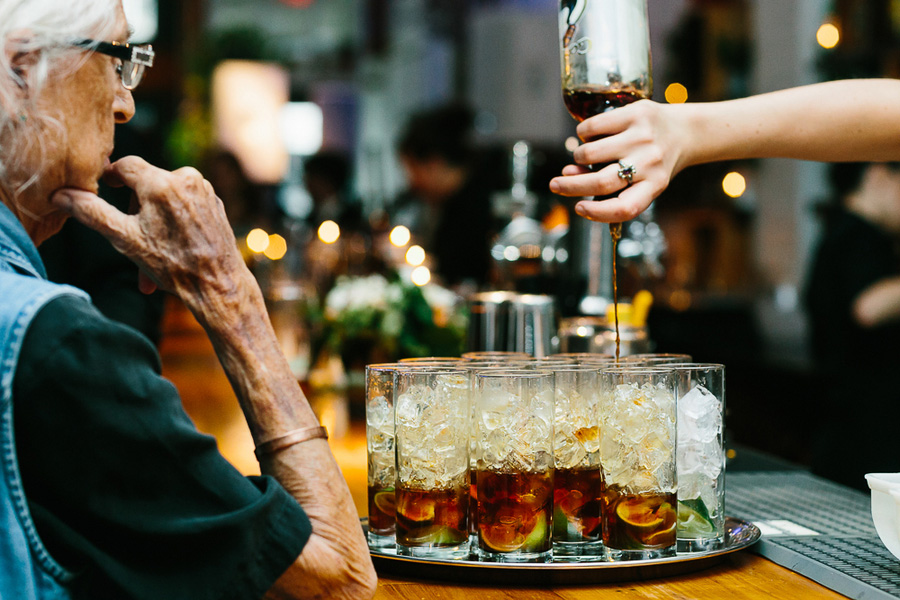 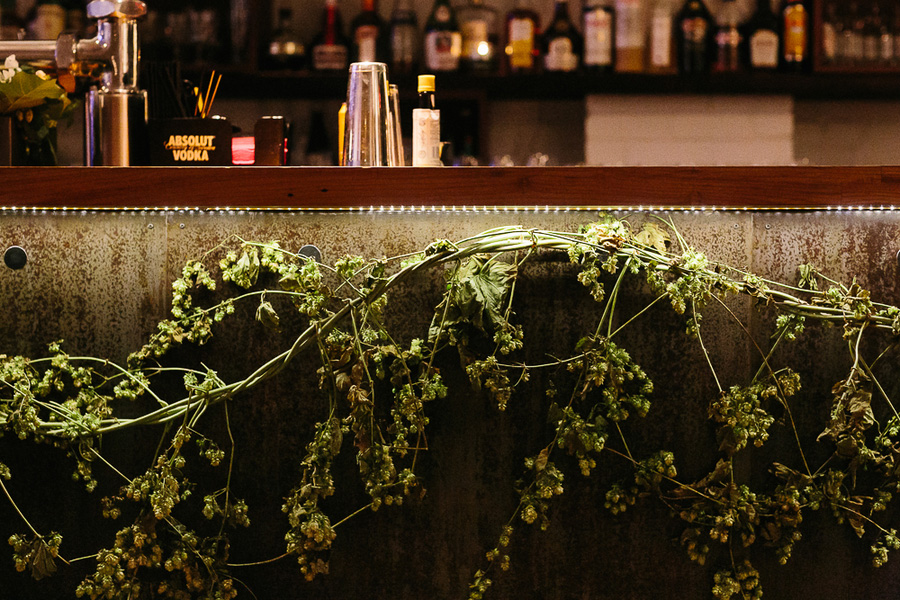 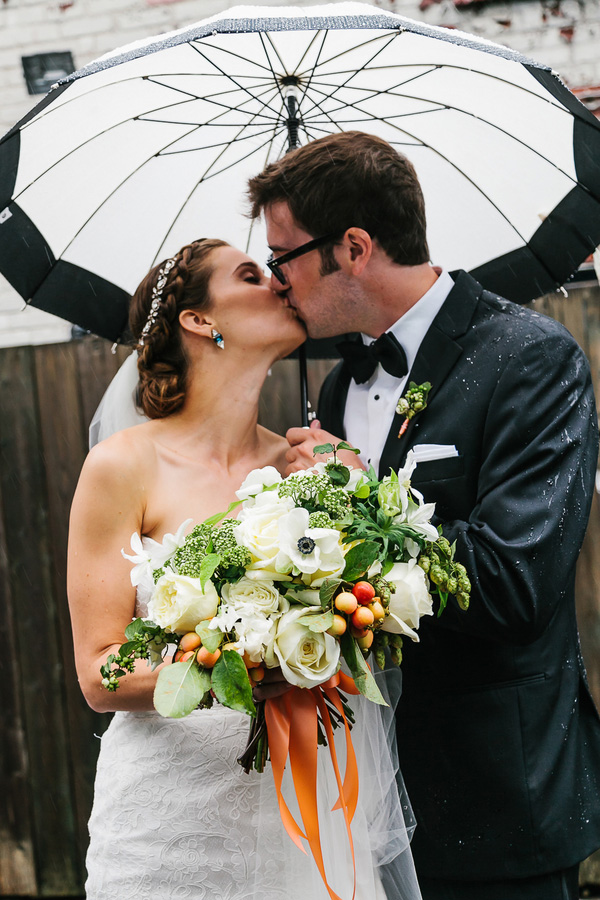 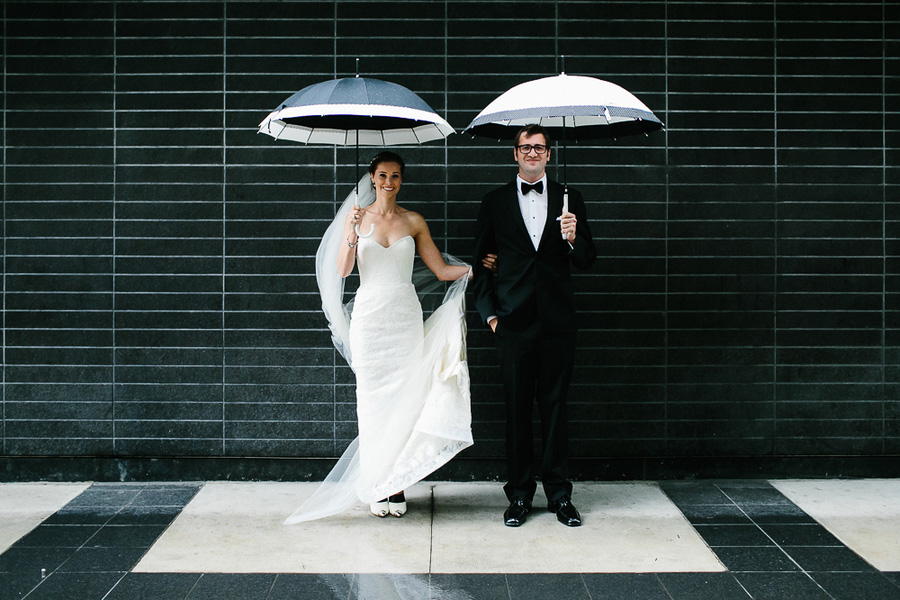 The ceremony was the most memorable part of the day. We were so nervous about standing up infront of everyone, but it ended up being the most relaxed moment of the evening, and absolutely the most special. Family and friends parted, as Andrea and her dad walked down the aisle to “All You Need Is Love” played on the violin. We had our best man and maid of honour standing at the front, while our bridesmaids and groomsman stood along the sides with friends and family. We kept the whole thing short and sweet, which everyone loved. 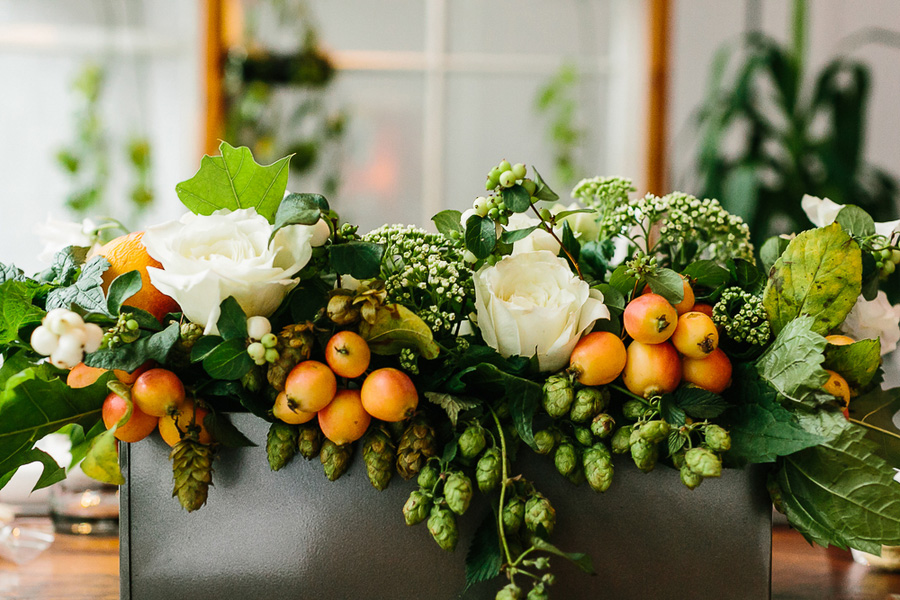 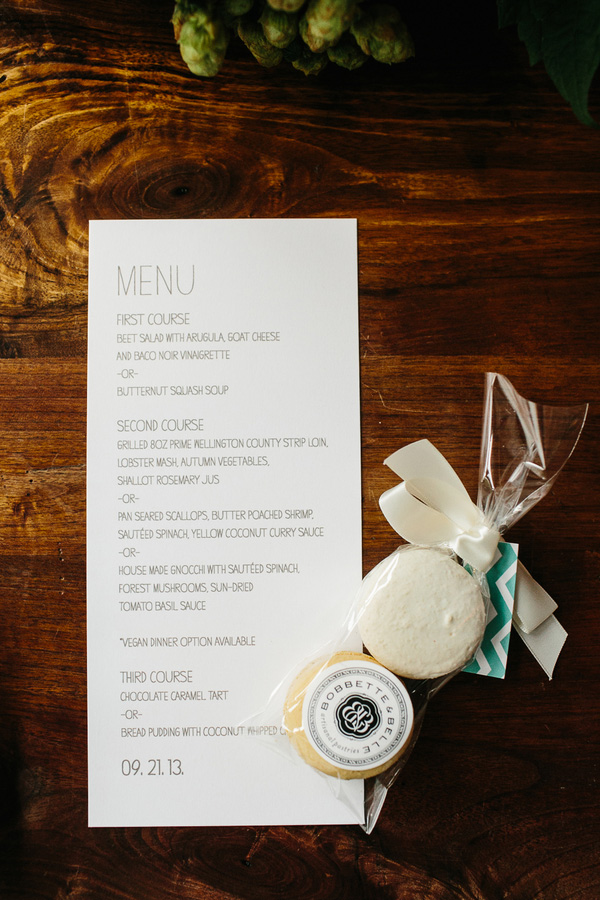 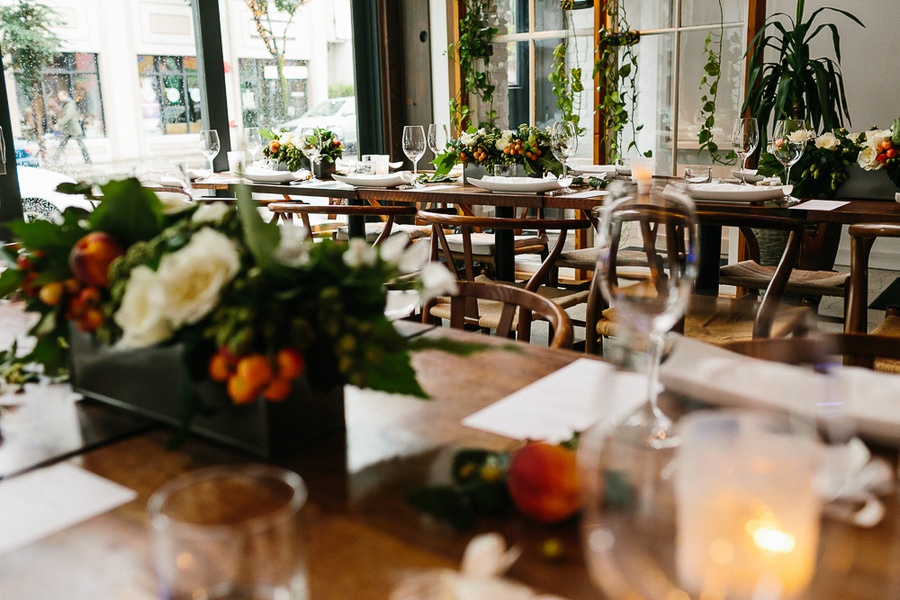 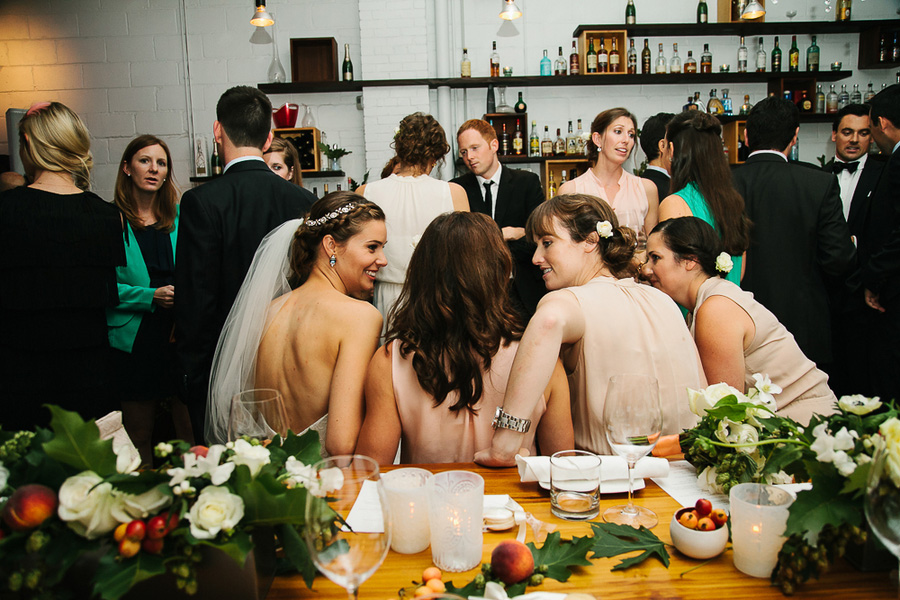 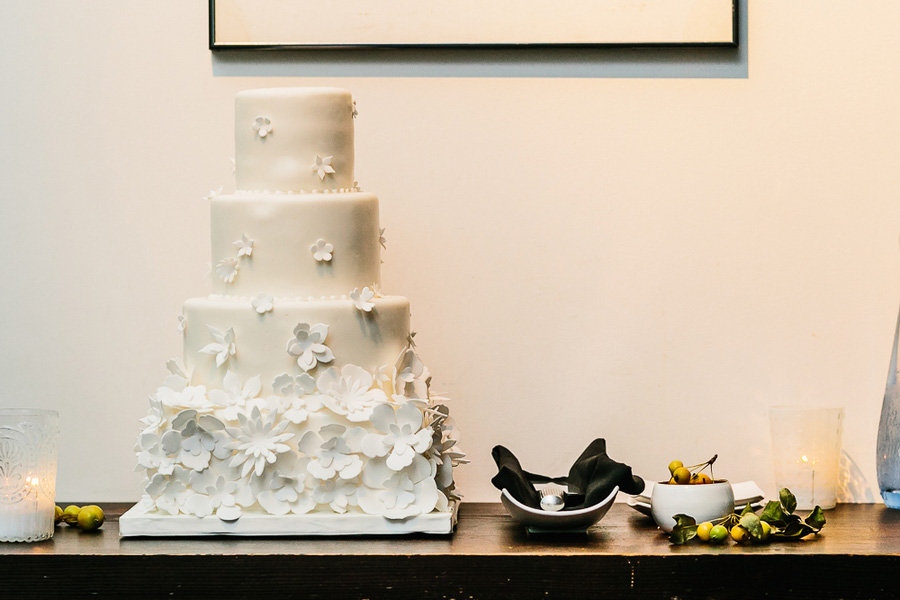 Andrea had just moved back to Toronto from New York. It was my best friends (and future best man’s) birthday. Andrea was invited out by a mutual friend, and even though she planned on staying in that night, decided to stop in for a drink. I had to work early in the morning, but decided to stop in for a drink as well. Once we were introduced, all plans of going home early were forgotten. We immediately clicked, and didn’t stop talking for the rest of the night. Over the next week, we went on four dates, and we’ve been inseparable ever since. I knew Andrea was expecting a proposal, so I had to surprise her somehow. In the weeks leading up to the proposal, I left hints that we would be doing something special soon. The thing was, I kept hinting at situations I knew Andrea would hate. The best one was hinting that I would be proposing at a baseball game, in front of thousands of people. That threw her off her game. Finally, the day before the proposal, I hinted that we were going out to a special dinner the following night. Andrea was excited to say the least. Little did she know this was another red hearing. Every morning, Andrea takes our dog for a walk so I can sleep a little longer (one of the reasons I love her). I woke up at about 5 am because I was so nervous, so I pretended to sleep until she woke up at around 8 and took the dog out. I knew I only had about 10 minutes, so I had to be fast. I quickly got dressed in a tuxedo I had rented the day before, and spread rose petals on the floor all over the apartment, and set up a video camera. I got down on one knee and waited for her to return. After what felt like one of the longest dog walks ever, she finally returned. She was shocked, but managed to say yes. I had actually managed to surprise her. I don’t think she ever expected for me to ask her to marry me at 8:20 in the morning.