Brittany and Matt were married at Veritas Vineyard & Winery in Virginia, where they hosted family and friends for an very personal celebration. The two met through mutual friends, and as Brittany tells us, Matt had to work hard to earn her affection, but persisted until she was convinced he was the guy for her! Alisandra Photography did a beautiful job telling the story of their wedding day and we’re so excited to share! 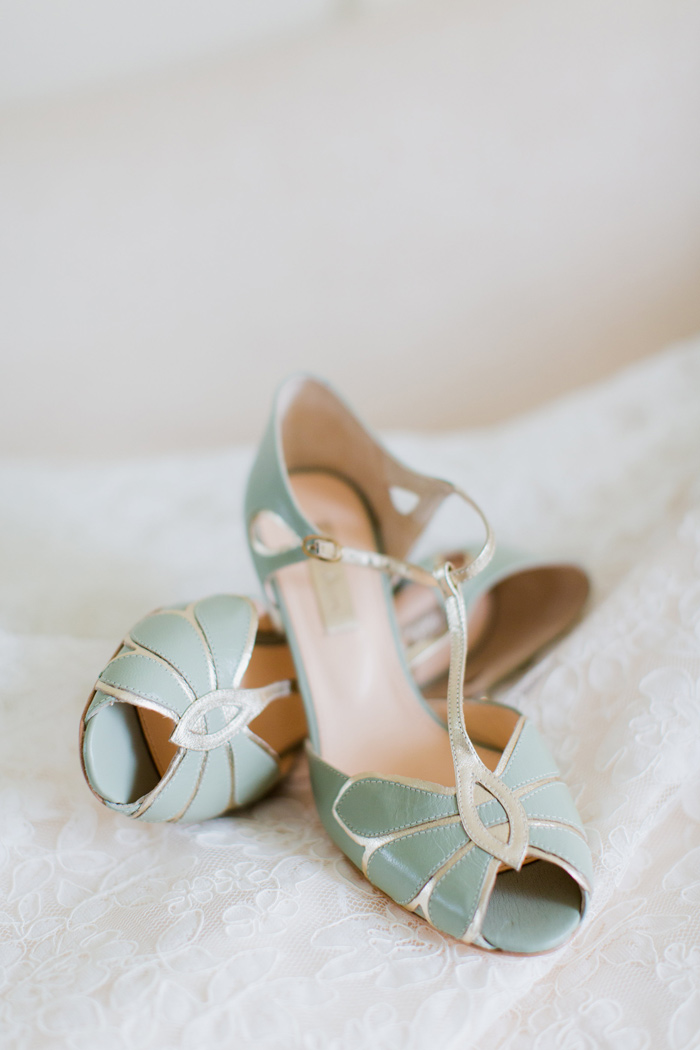 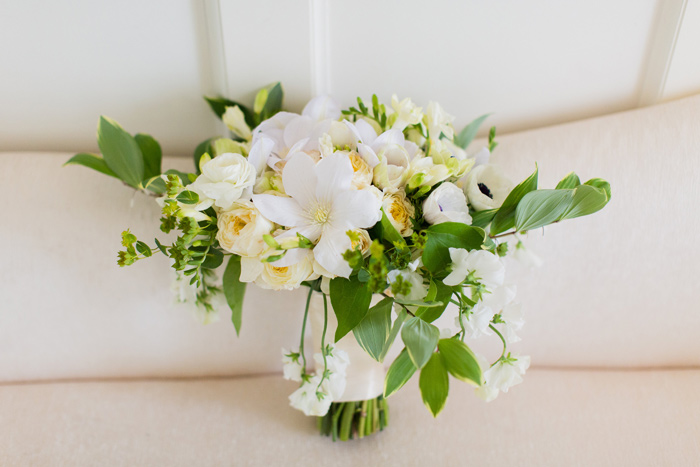 For us it was of course in the details being able to turn around every corner and see all the hard work come together. During one of my bridesmaid’s bachelorette party in Charleston we came across an extremely talented violinist name Seth Gilliard, and I immediately knew I had to have him at the wedding. We reached out to him, expecting him to be booked up or unable to travel that far, but we were so blessed that he was available to play and add such a great vibe to the whole day. We also had a local painter, Dan Nelson, capture our ceremony in a beautiful water color painting. It was great because during the reception guests could walk by his stand and see the progress he was making, and at the end of the night we had an amazing work of art that we will treasure for the rest of our lives. 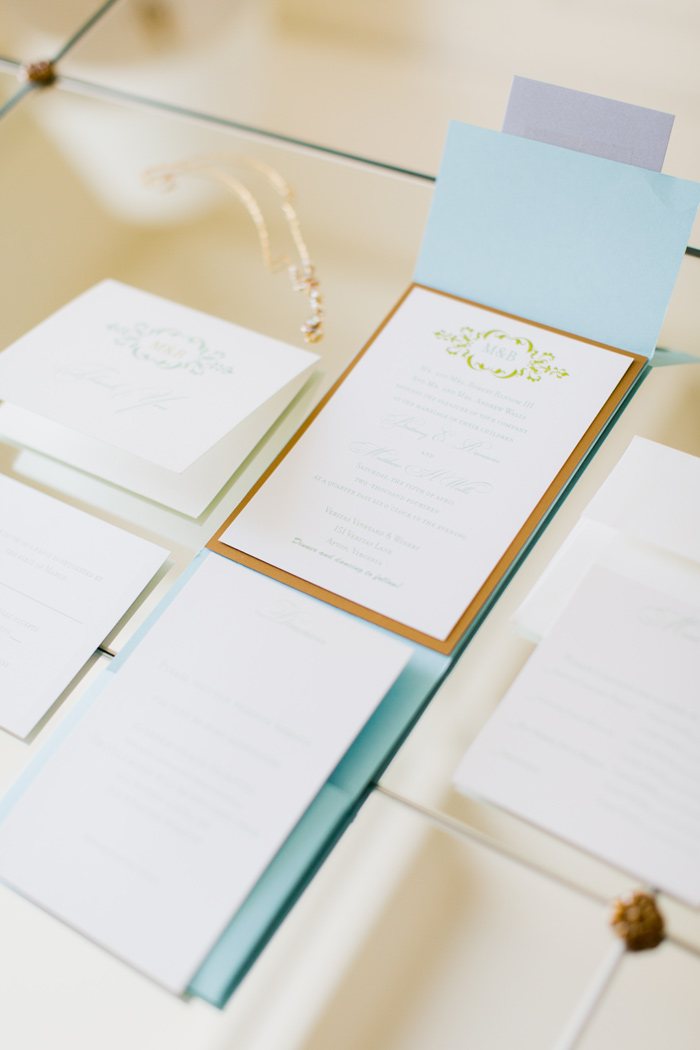 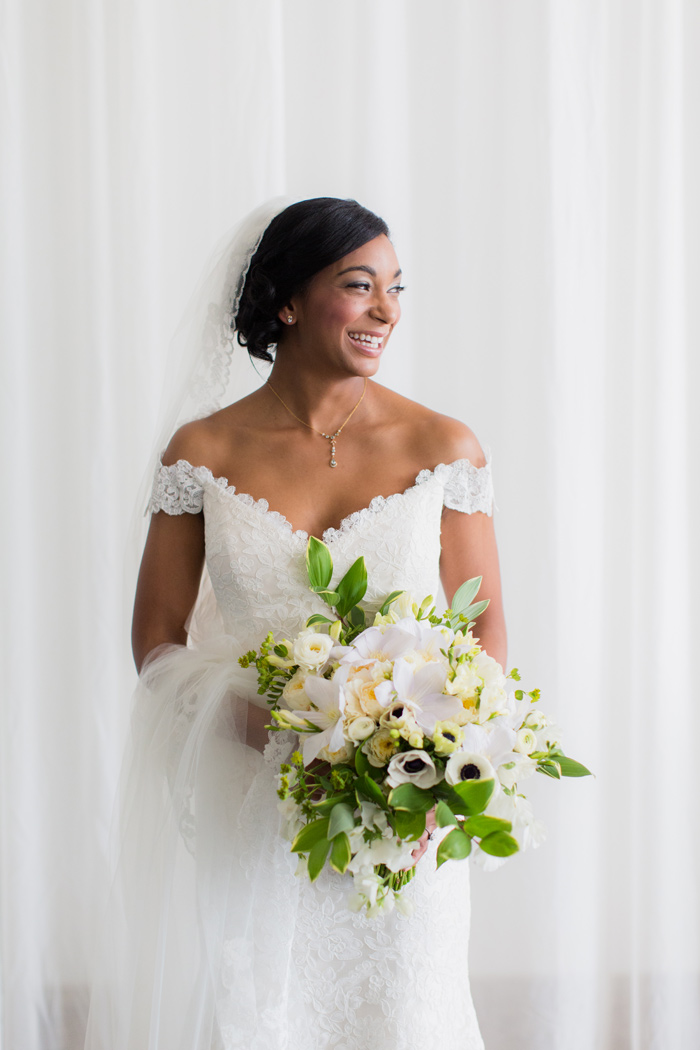 The dress was so special. My amazing sister set up a few boutique appointments with her, my mom, and mother-in-law with champagne in tow. At the first boutique Hannelor’s in Old Towne, Alexandria, Virginia, on dress number 3 I fell in love…The gown is ivory lace all over with off the shoulder straps. The back is very low cut and a beautiful long lace train. I wore it with an amazing Lazaro belt and matching veil that I wore a lot around the house. 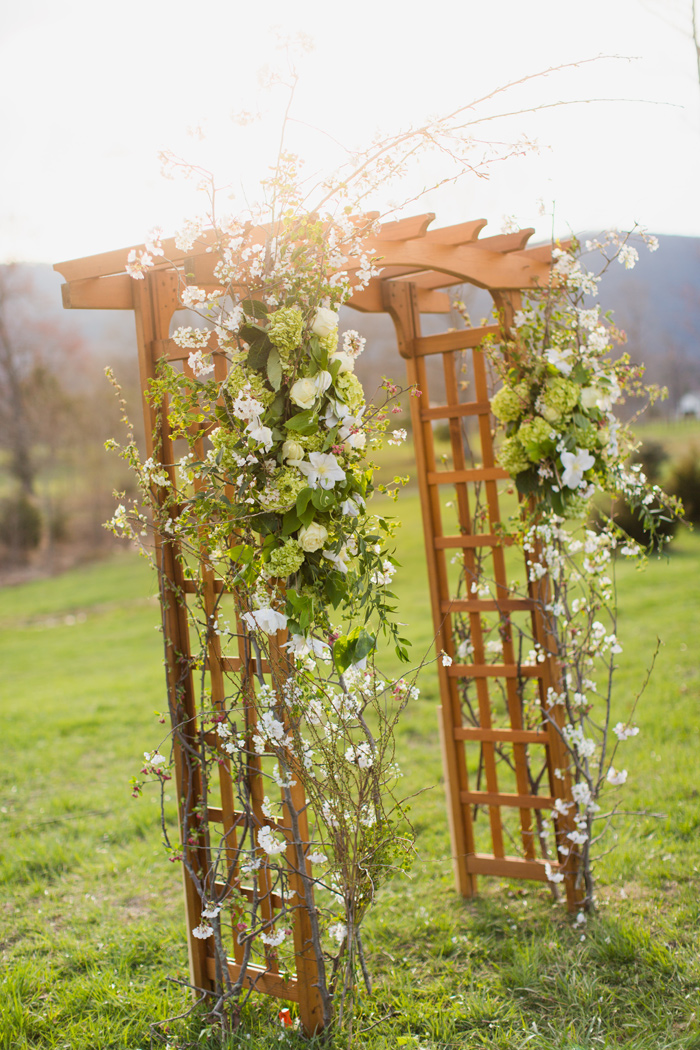 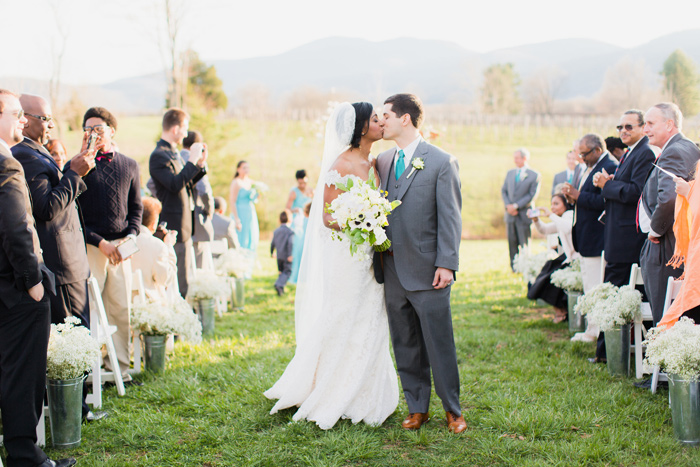 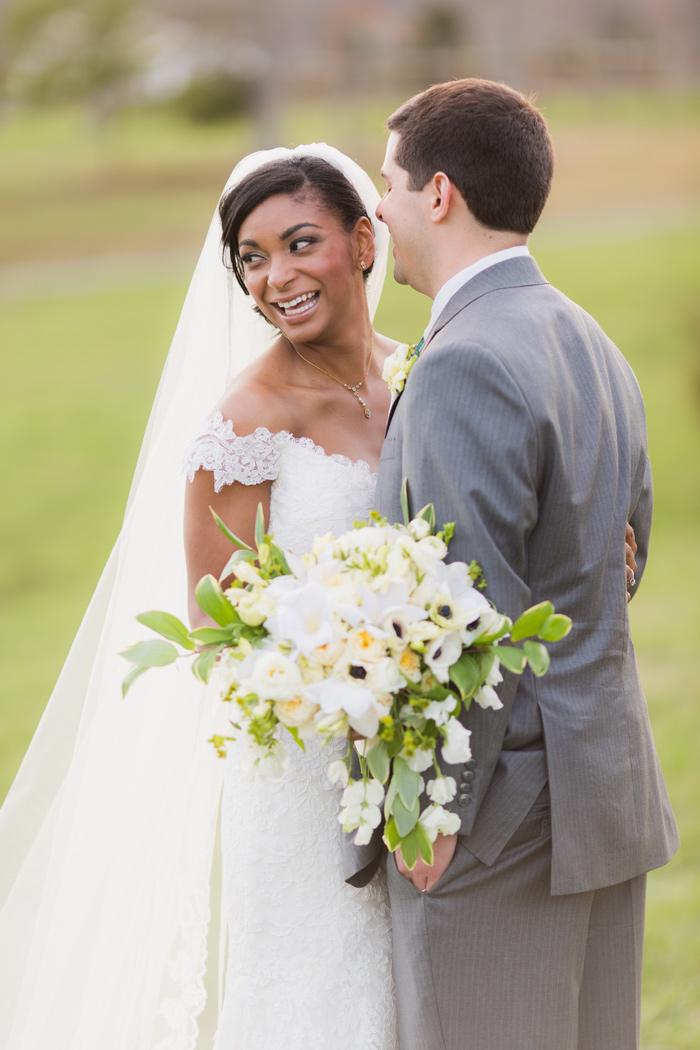 Family is extremely important to both of us, so we wanted to emphasize their importance everywhere we could. My aunt, who is an ordained minister, married us. The tasting room (where the bar was) features this enormous hearth, and on the mantel we included pictures of our parents and grandparents at each of their weddings. It was beyond special to walk in from the ceremony and right before the reception started to see those pictures of family that have just been huge role models for us. I was so happy to have my “something borrowed” be a family heirloom from my mother-in-law – a beautiful necklace – which also doubled as my “something blue” in the jewels. Lastly, my husband and I are not huge cake fans, but we were able to find the best assortment of delicious pies at Amphora Bakery in Northern Virginia, it was great cutting into a yummy Pecan Pie on our first day as husband and wife!!! 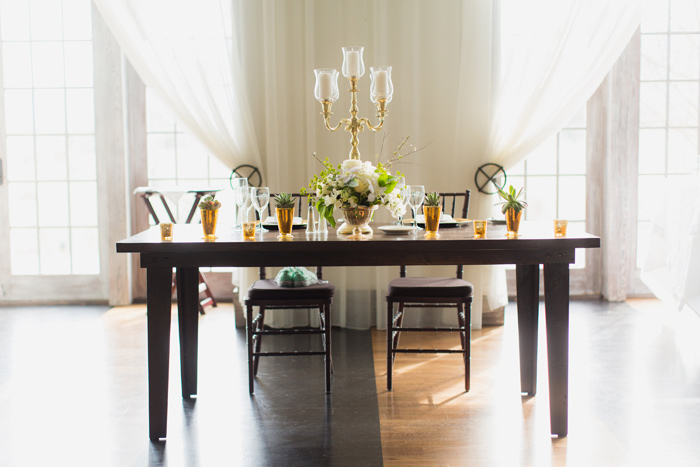 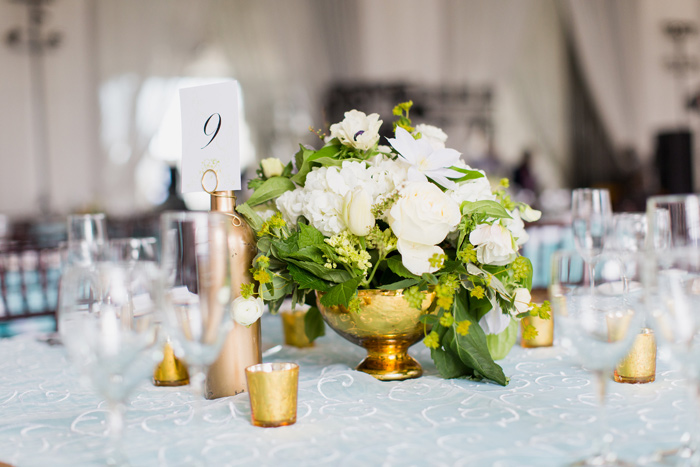 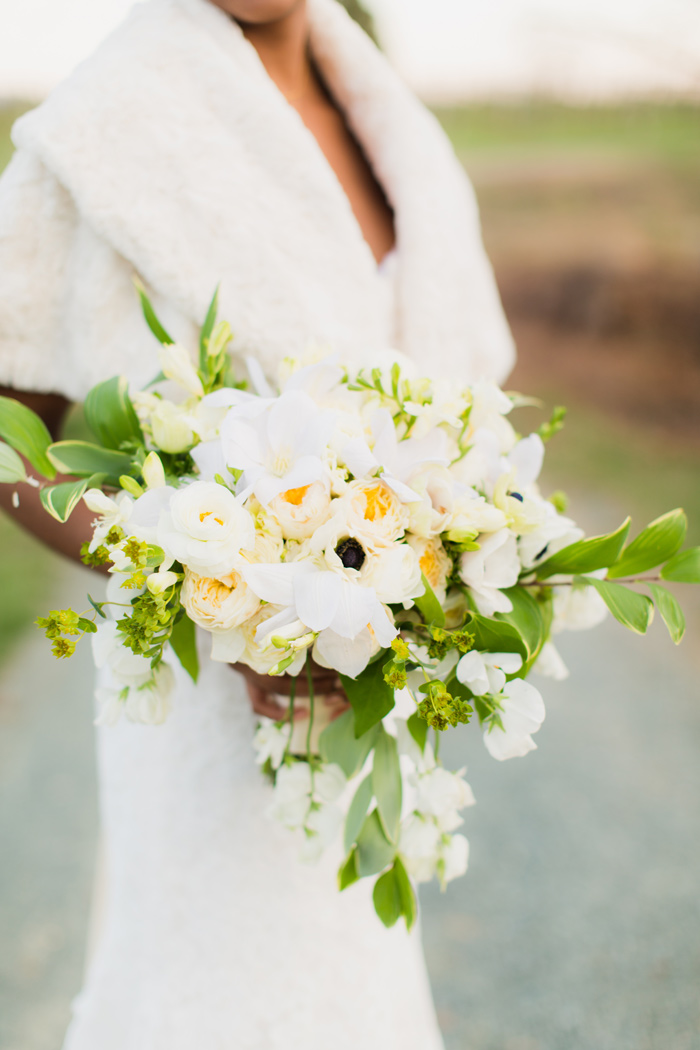 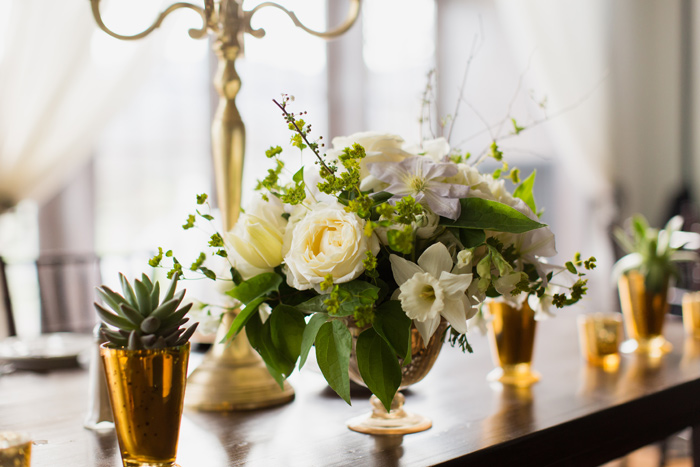 Brittany: The most memorable part of the day for me would be finally walking out after all of that waiting and nerves and seeing the sunlight over the mountains and at the end of the long walk my husband to be…everything just seemed to sparkle while Seth played “At Last” by Etta James.. Yea it was a moment.

Matt: Seeing Brittany for the first time as she walked down the aisle was definitely the most special moment of the day for me. She just looked so beautiful, and I immediately felt this calm come over me. I’ll never forget that moment. That said, I can’t fail to mention Brittany’s sister’s matron-of-honor speech. She started off with a nice heartfelt blessing for us as husband and wife, but then transitioned into singing a song she had written to the tune of Lorde’s “Royals” about us as a couple. It was hilarious and she completely stole the show. 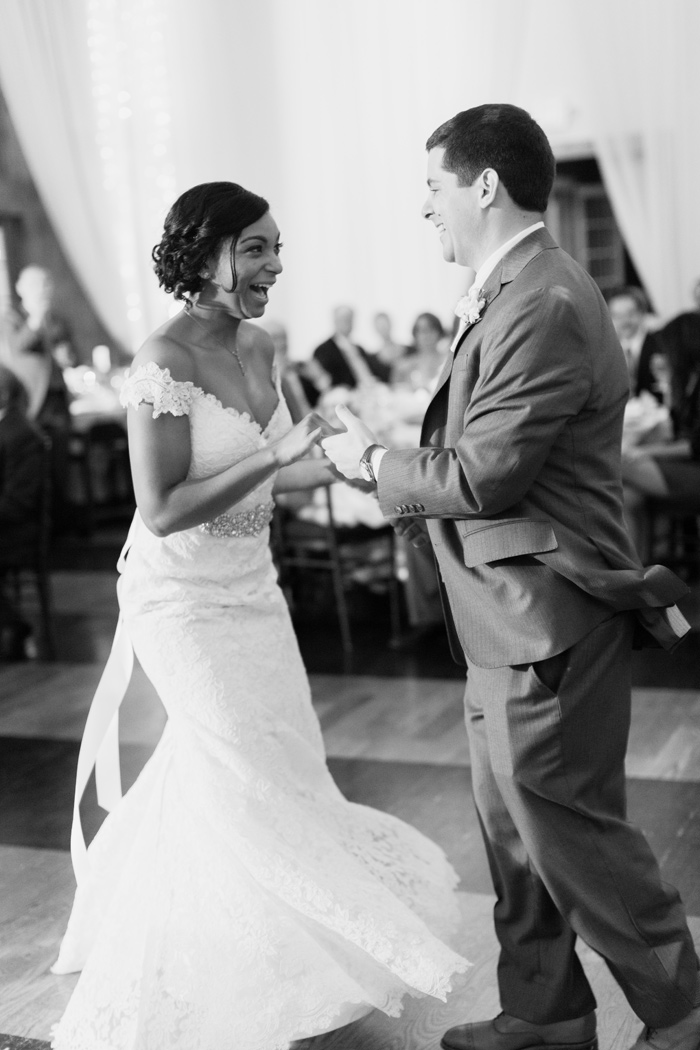 Matt and I were introduced through our mutual friend Stephanie, who is my college best friend and roommate and one of Matt’s closest high school friends. Stephanie’s husband, Kyle, is also one of Matt’s best friends and college roommate. The funny part is that I didn’t actually like him when we first met, but Matt knew better and stayed persistent, and I finally came around to see how wonderful he is. Both Stephanie and Kyle were in our wedding party (and we were in their’s!).

The proposal was such an amazing day. Matt told me we had dinner planned at the Virginia Museum of Fine Arts which is in walking distance from where Matt lived at the time. We spent most of the day relaxing outside because the weather was awesome for Richmond summer. Before we went in we wanted to walk around the courtyard area they have behind the museum, which includes a garden that sits on top of a hill and has a great view of the grounds. I’m smelling the roses, turn around and there he is – on one knee asking me to be his wife. I think my exact words were “hell yes.” The good news is he had already asked my dad for his blessing – I love him. As it turned out the VMFA was closed (Matt later pointed out the signs clearly noting this), and Matt had made reservations for both dinner and a night’s stay at The Jefferson, one of Richmond’s nicest hotels. 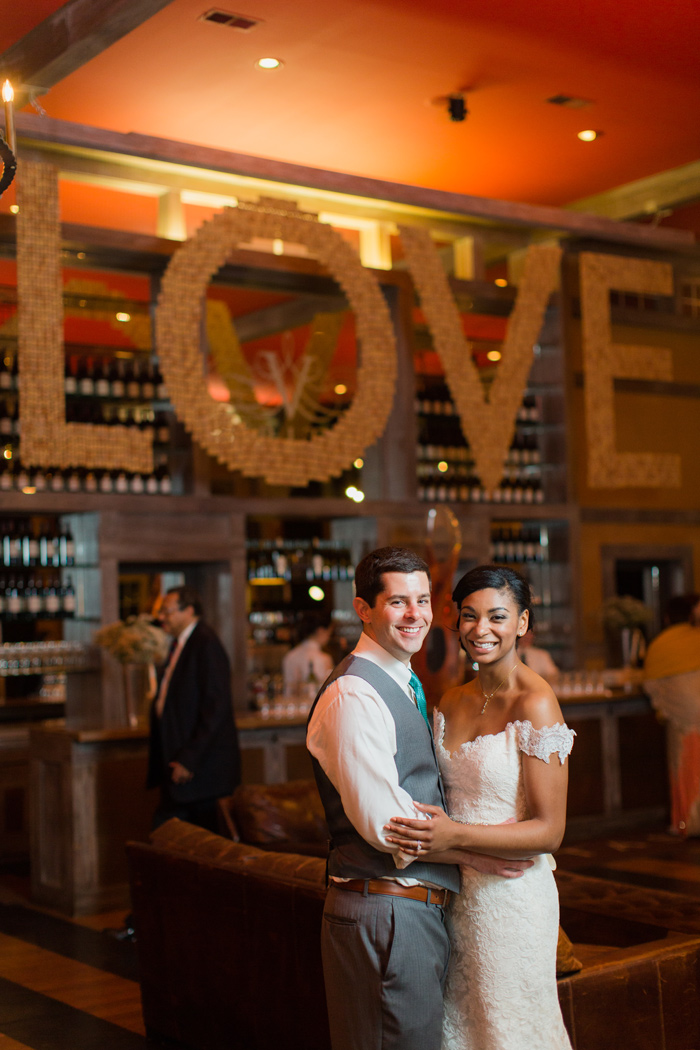