We were the very best of friends for almost two years before we started dating (although we were secretly in love for a good chunk of that and most of our friends weren’t at all surprised when we did get together). We were neighbors in the dorms at UCLA and when we weren’t trekking to classes on opposite sides of campus (he’s a science boy, I’m a history girl), we were attached at the hip watching Indiana Jones, pontificating about the under-appreciated merits of root beer, and taking the bus all over town on a quest for the perfect hamburger. We’re still exactly the same…except now we search for hamburgers by car, we’ve got five years of love under our belts, and we’ve added the world’s most adorable dog to the mix.

By Massiel | On January 19, 2013–an unseasonably warm day of clear skies, cool breezes, and bright sunshine–Nicholas asked me to spend the day with him at the Getty Center.

For those who are unfamiliar with it, the Getty is situated on a picturesque bluff with an unrivaled view of the Pacific Ocean to the west, and all of Los Angeles to the east, and it has been one of our favorite destinations in the city ever since our UCLA days. However, Nick currently lives in Riverside and I live in West Covina and it had been months since our last trip up to the beautiful marble expanses of the Getty. When he asked if I wanted to go, I agreed instantly, jumping at the opportunity to take in Renaissance art and some quality time in the museum gift shop. Nicholas had something altogether extra planned. Unbeknownst to me at the time, he had tucked away in his pocket was one very special ring that had been particularly made for this very occasion. Looking back, maybe I should have known something was up. He combed his hair and tucked in his shirt that day–a rare sight!

So we came and ate a picnic lunch from one of our old favorites (kafta and pita and hummus that made several passers-by jealous) and meandered in and out of the various exhibits. Those of you who have been to the Getty know that it is a massive complex of marble and glass with winding staircases and imposing balconies.

On our way to the lower gardens, Nicholas and I walked hand-in-hand down a zig-zagging flight of stairs with nothing and no one around but the ocean off in the distance and several content little bees flitting in and out of the rosemary growing along the walkway.

It was there that Nicholas dug around in his pocket and pulled out a glimmering little bit of gold and aquamarine–my birthstone–knelt down, and asked if we could spend the rest of our lives together. I said yes (actually, what I really said was, "Squeee!") and the pair of us, the January sun, the Pacific ocean, the bees amongst the rosemary, and the massive swaths of marble were all unspeakably happy. 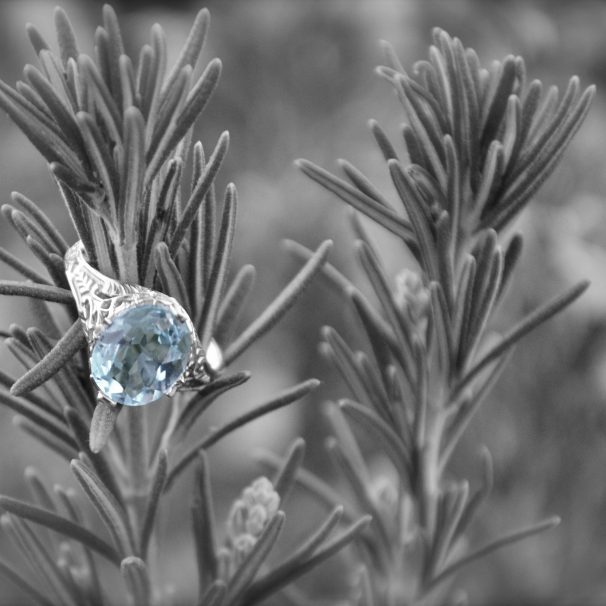 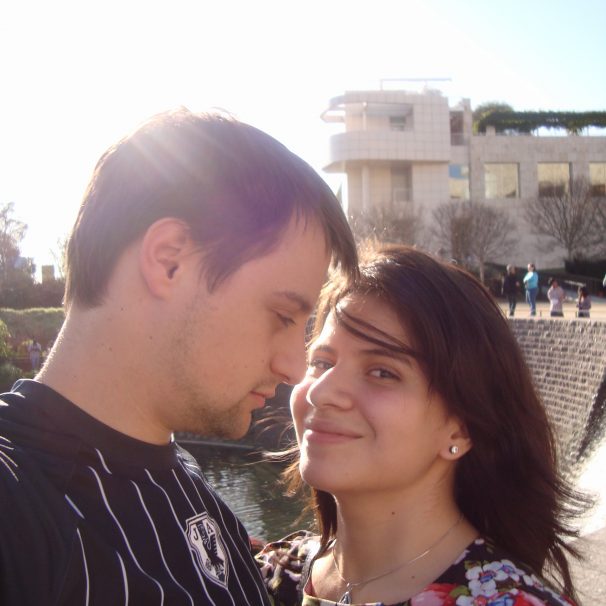