I was leading a week-long workshop and Chad was in my class. He was never my favorite student. He asked too many questions during my presentations. He emailed me before and after class with a lot of useless feedback. I thought he was giving me a hard time. By the time he asked me out a few weeks later, I was so shocked that I didn’t give him an answer. I finally realized that he was simply nervous, not mean-spirited. nerves, he was also persistent. After plenty of scheduling difficulties, we had our first date. It was a BAD date. So bad that promised me the following week that our "2nd, 3rd, 4th and so on" would be better. He kept his end of the bargain and we’ve been together ever since.

Chad and I were doing long distance before he proposed. I was working in DC while he was working in Djibouti, Africa. In trying to keep some semblance of a normal relationship, we often played Scrabble together online. I typically won. After 6 months of doing long distance, we decided to meet in Dubai to ring in 2012. Knowing that the desert is one of my favorite places in the world, Chad scheduled a group desert excursion for us. Unfortunately when the day arrived, the excursion car never showed up. Chad was very upset. I told him to calm down and just reschedule it for the next day, New Years Eve. The car did show up the next day. However, I was confused as the car was empty with only the driver inside. Chad said that the other people canceled. I said "Awesome" and high-fived him. As the sun was about to set, Chad asked if I was hungry because he brought us some snacks. He asked the driver to park so we could snack on some fruits, cheese and crackers. While my mouth was full of crackers, Chad asked that we play one last Scrabble game in 2011. I thought he was joking until he pulled out a Scrabble board game.
When I opened the Scrabble board, there were letter tiles spelling out: Sami, will you marry me? As I screamed YES, the driver brought out a bottle of champagne letting me know that the excursion was meant for just the two of us all along. It was the best scrabble game ever. 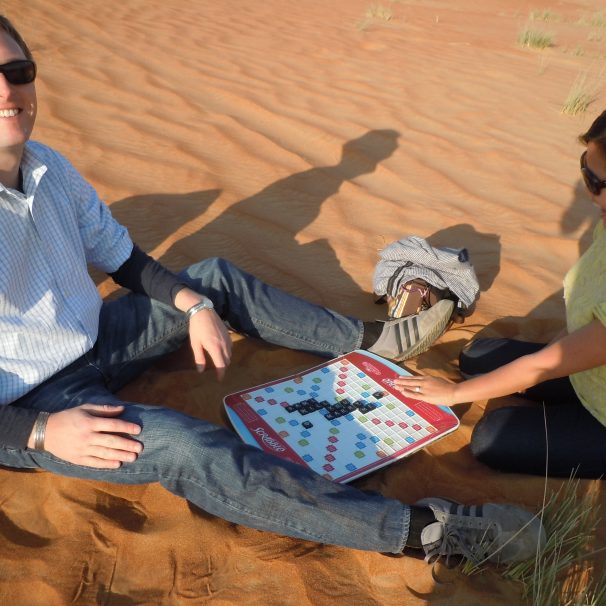