Carlos and I met by fate, on a chilly Autumn afternoon, in October 2005. He gave me a wink, I smiled back, and he asked me on our first date. Somehow, we both knew that it would be the first of many wonderful dates to come, and we’ve been together, in love, ever since.

On October 5, 2013, Carlos surprised me by taking me to Oheka Castle, in Long Island, New York. I was so thrilled, because I always wanted to go there! We pulled up to the drive, and it was just magical–the grounds, layout, statues, architectural details–I was in awe. After a romantic candlelit dinner, and toasting to love, we decided to explore the castle, and wandered into the library. Carlos knows that I have an affinity for all things old world and literary related, so we stayed in there for a bit. From the library, there are numerous sets of French doors, that lead out to the grounds and into the gardens. I opened the doors to peek out, and Carlos asked if I’d like to go for a walk. We wandered the gardens, pathways, and apple orchards–talking and holding hands. It was like a dream, because all of this was under romantic moon light. There’s a beautiful fountain in the center of the garden, which is lit aglow at night, so we walked over. I sat on the edge of it, and Carlos kissed me on the forehead, took my hand and got down on one knee! He poured out his heart and love, saying how honored he would be if I would spend my life with him and be his wife, followed by “Will you marry me?” Yes, of course, yes! He took the ring out,put in on my finger and we kissed and kissed! We stayed in the garden for a while, taking it all in, hugging and laughing together, before going back into the library. 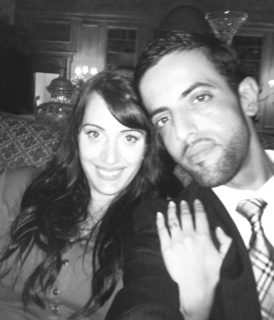 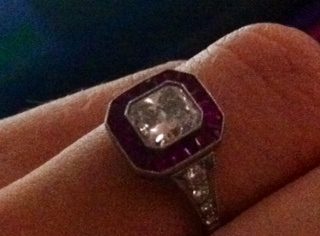 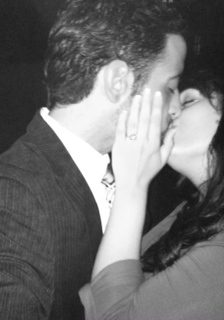 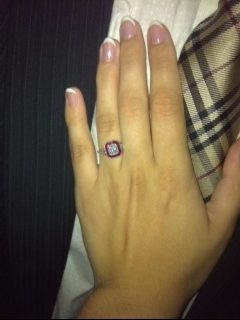