I first met my husband, Ian, his first day of work at the middle school where I was teaching. We were placed on a teaching team together and my coworkers were teasing me about him possibly being "the one." Because his last name was Fish, I immediately decided this would not be the case. After our first staff meeting, I walked up and introduced myself and told him where to find me if he had any questions or needed any help. He tells the story much differently saying that I ran up to him, told him my name in a millisecond, and ran off. He says it was love at first sight and he knew he would marry me (even though he had a girlfriend back in Michigan), but it was the complete opposite for me. He was ABSOLUTELY NOT my type. We started going out as friends quite often. He always hinted that he would like it to be more, but I would laugh it off and tell him we were always just going to be friends. Fast forward three years of dating other people, drama, breakups, and friendship: he finally gathered the nerve to kiss me at a work Christmas party. I shot him down cold. He looked heartbroken and told me that after three long years of persistence, he was finally done. This would be his last effort. I left the party confused and sad. I couldn’t stop thinking about how sad I had made him and how much I wanted to tell him I was sorry. The next day, I called him and asked him on a date. A year later, almost to the day, we were getting married.

There are really two proposal stories. The first is the "unofficial proposal." After almost 4 months of dating, Ian and I took a trip to Las Vegas together. We were at the top of the Mandalay Bay looking out at the strip and talking about what we would want a wedding to be. He is from Michigan, and one of the first things he did when he came to California was walk around the Mission Inn because that is the only "claim to fame" the locals talked about. We had also spent several nights walking around downtown during the Christmas holiday. He told me he could see himself getting married there during Christmas. I looked at him and asked if he was serious because it probably booked up quickly so we should look into it. He said OK, and then we had champagne to celebrate our decision to get married. The real proposal was in April. We ate Chinese food, took a walk together downtown, and just when we neared the Chinese gazebo across from the Mission Inn, Ian told me that he forgot to give me the fortune cookie after dinner. I opened mine and read it. The fortune said, "In love and life you are my heart. Marry me, Candice." I turned around and he was on one knee with the ring. I immediately said yes, and as we hugged and kissed, a homeless man who had been digging for cans in the trash can next to us clapped and whistled and congratulated us. It was perfect. 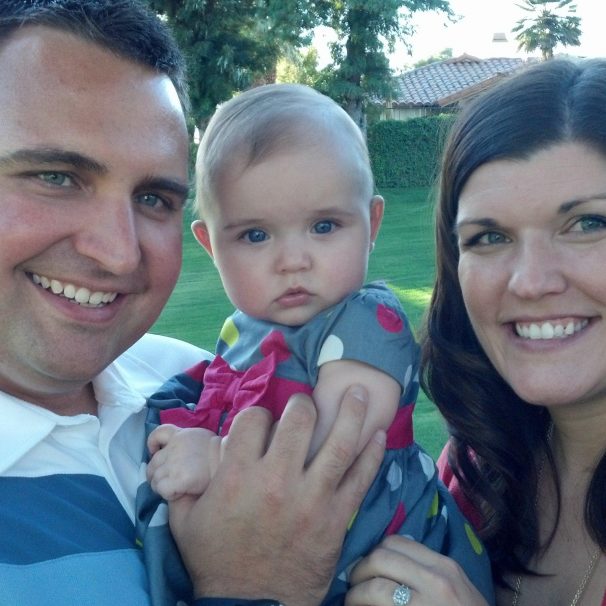