Nick and I met the week prior to our sophomore year in college at Vanguard University. My roommate Katie was in Vanguard’s Frontline group which leads around a group of freshman the week just before their first classes. She had a fit when she found out she was paired up with the one guy she didn’t know on campus, Nick Peterson. I told her I was be adventurous and tag along to their group events since I was on ASB and encouraged to do so anyways. For the first event I was shoved into Nick’s car because she couldn’t fit me in hers and I remember thinking, “Why do I get the short end of the stick if I’m here for you!?” I jumped into the shotgun seat of the car since all the quiet, hesitant freshman piled into the back. Nick and I quickly hit it off in conversation realizing our similarities of local Orange County folk, with interest in the same TV shows and music, also that our parents are young and Lutherans (which usually go hand in hand for couples of that nature), and we both grew up with season tickets in the same row only 3 sections a part from each other.

Throughout Frontline week, we had our flirtatious endeavors, mostly trying to stay out of playing the dangerous game of “Buck-Buck” our school plays at the beach.. Nick was mostly reserved, but the last night of Frontline week, which is the Dorm Rally night, I had no idea I was about to be taken aback tremendously. The quiet introvert I had become to know, showed up in his shorty-short spandex and danced to a well thought out routine to go on and erupt the crowd in laughter and applause. “Now this is a man who can win my heart”, I thought blushing inside.
We were dating only a few weeks into school, after I told him he could not kiss me until I went on a date, which now looking back I realized sped up the process. By December we said our “I love you’s” for the first time as we watched the old-time classic, The Lion King.

I knew this was the man I was going to spend the rest of my life with and quickly wanted to speed into marriage, but realized my roadblock of finishing school. Being the determined, go-getter I am, I got us both to graduate in 3.5 years so we could marry earlier, and also save our parents a semester of tuition, which then went into our open bar wedding anyways. Remember what I said out young Lutherans? They are also big partiers!

We got my left-hand sparkler designed a year into dating and this is one of my favorite parts. My grandmother gifted me a diamond for the center stone of our ring and the two side stones were taken from the diamond earrings my father gave me at 16 years old. The stone from my grandma was a diamond from her second marriage with my grandpa I had the closest relationship with growing up. He had always promised to replace the Cubic Zirconia they had in her ring from when they were first married, but he didn’t have the funds until after their divorce but he loved her enough to still replace it after their divorce. I wish I could say my grandpa was able to see me marry and be in love but he had passed away my senior year of high school. Which makes me proud to know his legacy made it through my ring.

Although our parents approved of our relationship together, they weren’t too happy with the fact we were marrying at the ripe old age of 22. We had to quickly remind them they set the standards in both their young marriages and promised we could survive. Through out our relationship together we have seen our parents grow in their own ways. They have each shown and spoke of the ways they have learned from me and Nick through our relationship with each other. I never would have realized that my parents and in-law’s would be learning from such a young couple as ourselves. I have only one to thank and that is Our Creator. I am blessed for this man I call my husband and I’m proud to share our God-centered love story.

Remember how I told you we had the ring designed? Well, I had to wait to see that beauty for 4 months before he finally put it on my finger! It was Valentines Day 4 years ago, he setup a dinner at our friends place, they have a porch that hangs over a small lake. He wanted to make sure everything stayed personal so he trimmed the table with our favorite drink, Jones soda and brought to dinner out favorite burger from TK Burgers. He had his friends pick me up dressed in full tuxedos. I had three immediate thought: 1. Am I under dressed? 2. I’ve never seen these un-mature men look so nice. 3. Something is up! They chauffeured me to their apartment (which I thought was a detour) but quickly realized it was not. Italian music filled the air and there was my man standing at his dinner table setup over the lake. One thing I will admit, at that time, we both knew where this night would end and hence, we enjoyed our most awkward and fasted dinners EVER! We decided to skip ahead and trade gifts, he gave me a card which I read the sweetest words only to look up from his sweet notes and find him on his knee. I am the kind of lady who can cry over a heartfelt happy commercial, so it’s safe to say the water-works arrived! My friends popped out from hiding places in the apartment to congratulate and he took me to his parents where we shared celebratory champagne and home-made crème brulee, then set off for my parents to share even more champagne. Being able to celebrate our love with our families was so important to me since they have been the role models I couldn’t be any more thankful for. By the end of the night I was working on my wedding binder, go-getter, determined mind set back on track! 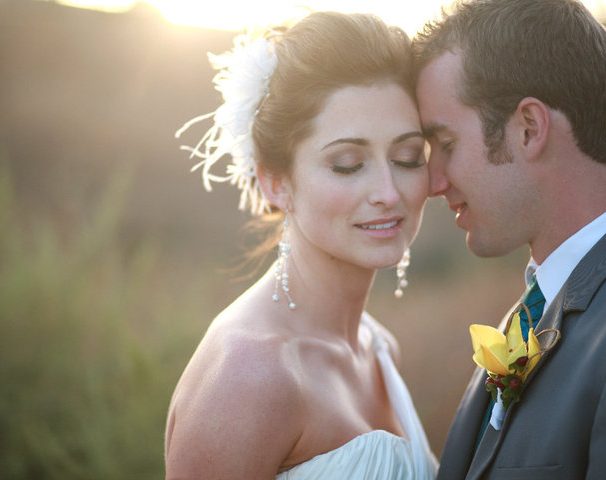 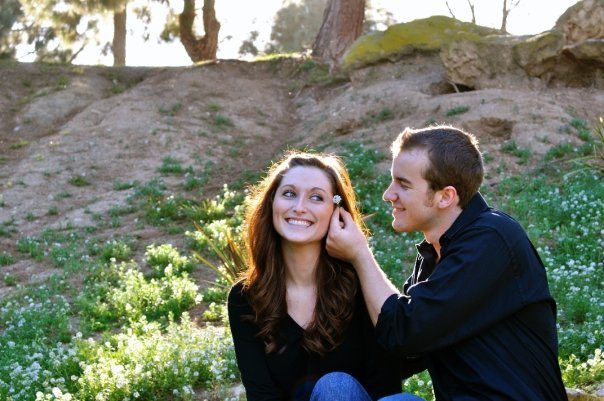 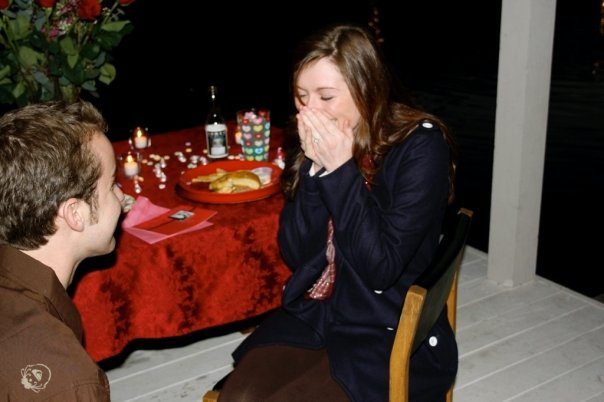 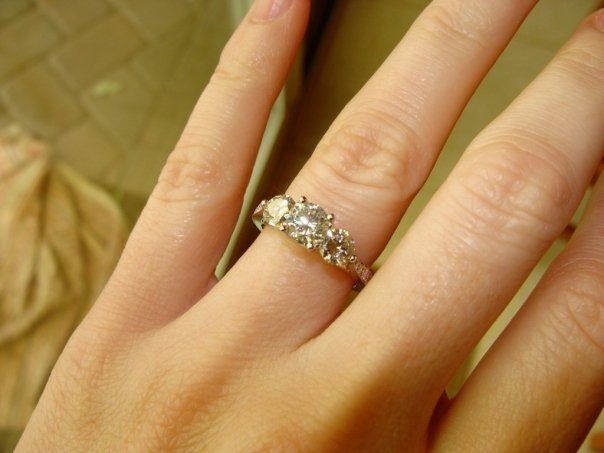