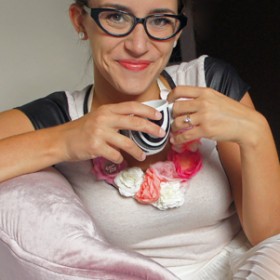 I am very lucky to currently live abroad in Malta, a tiny island in the middle of the Mediterranean Sea, where I’m planning my Canadian wedding from. Have you ever wondered what it’s like to shop for a wedding dress in the Mediterranean? It turns out it’s very different, and very much the same, as dress shopping in Canada (or, I presume, the US!) 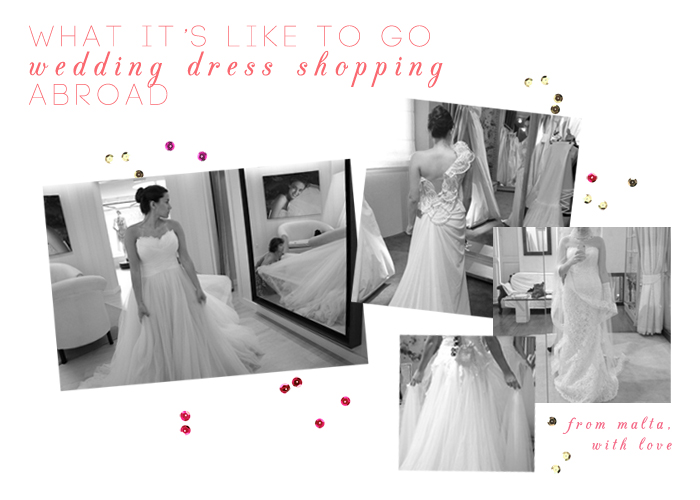 First of all, there’s very little sales pressure in dress shops. You don’t get the feeling anyone is working for a commission around here. (When I tried on dresses in Canada I always felt a lot of pressure.)

In Malta it’s assumed you will be married in a church (Malta is 98% Catholic) so your dress will require a veil and shoulder coverings. It’s also assumed that you can – like all respectable European women – walk in heels (which I definitely can not) and that you will wear them on your wedding day. I was talked into heels but I’m hopeless in them (I look like Bambi on ice from the Disney film). Any tips on breaking them in?

I also get the feeling that in Malta it’s considered a bit improper to wear support garments under your dress, and that a pretty slip or crinoline would be much more suitable, than say, Spanx. I am wearing Spanx under mine (I need all the help I can get) but none of the salespeople at dress shops in Malta knew what Spanx were! It was funny (and a tad embarrassing) explaining them when I wore them to my first fitting.

And the most striking difference is that all wedding dress shops in Malta have a dress exclusivity policy! That means no other bride on the island but you will ever have your dress. That is great, if you are concerned about that kind of thing, but it also creates a bit of a frenzied atmosphere. There is only one of each dress in every shop (in one size!), so if you don’t buy it right then right there it might not be there tomorrow. And in fact, in some shops I wasn’t even allowed on the same floor as other women trying dresses on – I presume to prevent fighting and dress snatching!

Weddings in Malta have a few unique customs too. Usually the bride wears her dress for the ceremony and the after-party (I haven’t seen many women change into a second reception dress). And wedding receptions in Malta aren’t large sit-down-dinner affairs. It’s much more common to invite hundreds of family members and friends to a stand-up cocktail hour reception. It’s also not uncommon to have your wedding ceremony (usually in a church) at night!

What’s one thing I might not know about wedding dress shopping, or weddings, where you live?

I think these quirky cultural differences are fascinating, and would love to know!